Well water contaminated by arsenic in Bangladesh is considered one of the most devastating public health crises in the world. Almost a quarter of the country’s population, an estimated 39 million people, drink water naturally contaminated by this deadly element, which can silently attack a person’s organs over years or decades, leading to cancers, cardiovascular disease, developmental and cognitive problems in children, and death. An estimated 43,000 people die each year from arsenic-related illness in Bangladesh.

To avoid arsenic contamination, many Bangladeshi households access water via private wells drilled to 300 feet or less, beneath impermeable clay layers. Such clay layers have been thought to protect groundwater in the underlying aquifers from the downward flow of contaminants. However, a study published in Nature Communications this week suggests that such clay layers do not always protect against arsenic, and could even be a source of contamination in some wells.

Clay layers had previously been suspected of contaminating groundwater with arsenic in parts of Bangladesh, the Mekong delta of Vietnam and the Central Valley of California, but the new paper provides the most direct evidence so far.

“Our findings challenge a widely held view, namely that impermeable clay layers necessarily protect an aquifer from perturbation,” said Alexander van Geen, a research professor at Columbia University’s Lamont-Doherty Earth Observatory who has been studying arsenic contamination of drinking water for two decades. “In this context, we show from several different angles — failed attempts to lower local exposure, high-resolution drilling, monitoring, and groundwater dating — that this is actually not the case for groundwater arsenic, because distant municipal pumping can trigger remotely the release of arsenic below such a clay layer.”

The researchers were inspired to conduct the study after two manually pumped community wells drilled to intermediate depths in the vicinity of Dhaka, the capital of Bangladesh, suddenly failed, producing water with elevated concentrations of arsenic after having generated clean water for many months.

Most sand contains arsenic, but it is not a problem until the arsenic is released into drinking water in some way, typically through response to reactive carbon. The sources of this reactive carbon remain poorly understood, despite decades of study. One possibility is that it travels into the sediment with the downward flowing of surface waters, but the researchers showed with groundwater dating that such flow was not responsible in the case of their study area. Another is that reactive carbon is released as plant matter breaks down underground. The third theory, demonstrated for the first time in the new paper, is that excessive municipal pumping can compress the clay layers, squeezing out reactive carbon, which then releases arsenic from local sediments.

Indeed, the researchers found that the recent changes in arsenic near Dhaka were the result of pumping from deeper aquifers to satisfy the municipal supply of the city. Because of this deep municipal pumping, water levels under Dhaka itself are a hundred meters below what they would naturally be — the aquifer just doesn’t refill fast enough. This depressed area is called the Dhaka “cone of depression,” and it extends approximately 20 kilometers around the city.

“In Dhaka, the pumping probably accelerated the release of arsenic and allowed us to document the changes within a decade,” said van Geen. “We wouldn’t have figured this out without having been there monitoring wells for at least 10 years. Monitoring is not very exciting, but because of the monitoring we discovered something fascinating.” 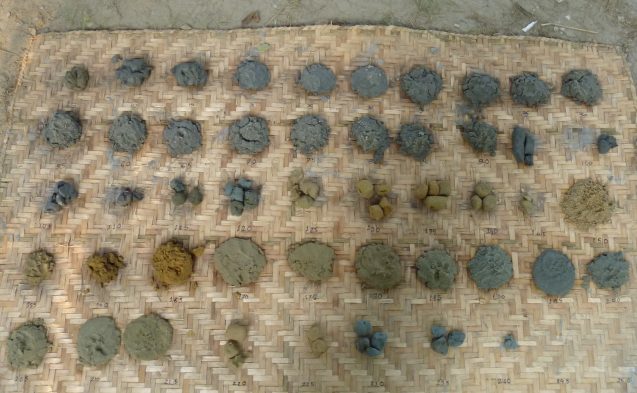 The research team’s findings are especially worrisome for local households on the outskirts of Dhaka that have been privately re-installing wells to access relatively shallow aquifers beneath the impermeable clay layer.

Even in the absence of deep pumping for municipal needs, long-term diffusion of dissolved organic carbon from clay layers could explain why private wells screened just below a clay layer in other sedimentary aquifers are more likely to be contaminated with arsenic than deeper wells, according to the paper.

While the geochemical conditions surrounding every aquifer are different, the problem of arsenic and other contaminants leaking into deep aquifer groundwater is not unique to Dhaka. “It’s a warning and it means that in some areas you need to probably test wells more frequently than others,” said van Geen.

The problem is not unique to Bangladesh, either. With groundwater pumping from aquifers expected to continue throughout the world, more global monitoring for contamination by arsenic from compacting clay layers may be necessary, according to the paper’s authors.