With the western United States and northern Mexico suffering an ever-lengthening string of dry years starting in 2000, scientists have been warning for some time that climate change may be pushing the region toward an extreme long-term drought worse than any in recorded history. A new study says the time has arrived: a megadrought as bad or worse than anything even from known prehistory is very likely in progress, and warming climate is playing a key role. The study, based on modern weather observations, 1,200 years of tree-ring data and dozens of climate models, appears this week in the leading journal Science.

“Earlier studies were largely model projections of the future,” said lead author Park Williams, a bioclimatologist at Columbia University’s Lamont-Doherty Earth Observatory. “We’re no longer looking at projections, but at where we are now. We now have enough observations of current drought and tree-ring records of past drought to say that we’re on the same trajectory as the worst prehistoric droughts.”

Using rings from many thousands of trees, the researchers charted dozens of droughts across the region, starting in 800 AD

Reliable modern observations date only to about 1900, but tree rings have allowed scientists to infer yearly soil moisture for centuries before humans began influencing climate. Among other things, previous research has tied catastrophic naturally driven droughts recorded in tree rings to upheavals among indigenous Medieval-era civilizations in the Southwest. The new study is the most up-to-date and comprehensive long-term analysis. It covers an area stretching across nine U.S. states from Oregon and Montana down through California and New Mexico, and part of northern Mexico. 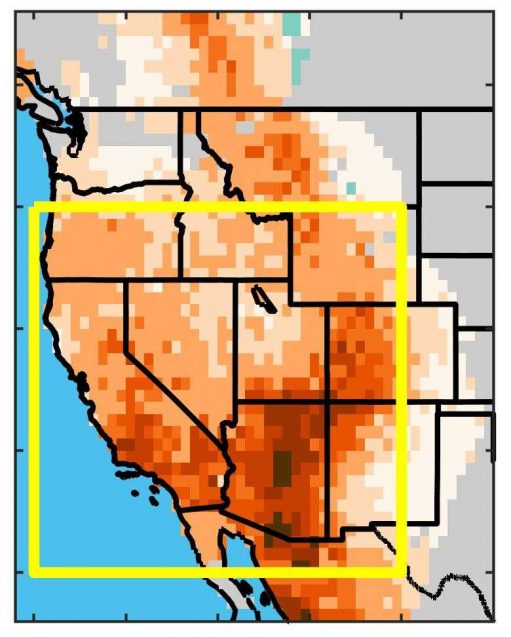 Using rings from many thousands of trees, the researchers charted dozens of droughts across the region, starting in 800 AD. Four stand out as so-called megadroughts, with extreme aridity lasting decades: the late 800s, mid-1100s, the 1200s, and the late 1500s. After 1600, there were other droughts, but none on this scale.

The team then compared the ancient megadroughts to soil moisture records calculated from observed weather in the 19 years from 2000 to 2018. Their conclusion: as measured against the worst 19-year increments within the previous episodes, the current drought is already outdoing the three earliest ones. The fourth, which spanned 1575 to 1603, may have been the worst of all — but the difference is slight enough to be within the range of uncertainty. Furthermore, the current drought is affecting wider areas more consistently than any of the earlier ones — a fingerprint of global warming, say the researchers. All of the ancient droughts lasted longer than 19 years — the one that started in the 1200s ran nearly a century — but all began on a similar path to to what is showing up now, they say.

A megadrought as bad or worse than anything even from known prehistory is very likely in progress, and warming climate is playing a key role

Nature drove the ancient droughts, and still plays a strong role today. A study last year led by Lamont’s Nathan Steiger showed that among other things, unusually cool periodic conditions over the tropical Pacific Ocean (commonly called La Niña) during the previous megadroughts pushed storm tracks further north, and starved the region of precipitation. Such conditions, and possibly other natural factors, appear to have also cut precipitation in recent years. However, with global warming proceeding, the authors say that average temperatures since 2000 have been pushed 1.2 degrees C (2.2 F) above what they would have been otherwise. Because hotter air tends to hold more moisture, that moisture is being pulled from the ground. This has intensified drying of soils already starved of precipitation.

All told, the researchers say that rising temperatures are responsible for about half the pace and severity of the current drought. If this overall warming were subtracted from the equation, the current drought would rank as the 11th worst detected — bad, but nowhere near what it has developed into.

“It doesn’t matter if this is exactly the worst drought ever,” said coauthor Benjamin Cook, who is affiliated with Lamont and the Goddard Institute for Space Studies. “What matters is that it has been made much worse than it would have been because of climate change.” Since temperatures are projected to keep rising, it is likely the drought will continue for the foreseeable future; or fade briefly only to return, say the researchers.

“Because the background is getting warmer, the dice are increasingly loaded toward longer and more severe droughts,” said Williams. “We may get lucky, and natural variability will bring more precipitation for a while. But going forward, we’ll need more and more good luck to break out of drought, and less and less bad luck to go back into drought.” Williams said it is conceivable the region could stay arid for centuries. “That’s not my prediction right now, but it’s possible,” he said.

Lamont climatologist Richard Seager was one of the first to predict, in a 2007 paper, that climate change might eventually push the region into a more arid climate during the 21st century; he speculated at the time that the process might already be underway. By 2015, when 11 of the past 14 years had seen drought, Benjamin Cook led a followup study projecting that warming climate would cause the catastrophic natural droughts of prehistory to be repeated by the latter 21st century. A 2016 study coauthored by several Lamont scientist reinforced those findings. Now, says Cook, it looks like they may have underestimated. “It’s already happening,” he said.

The effects are palpable. The mighty reservoirs of Lake Mead and Lake Powell along the Colorado River, which supply agriculture around the region, have shrunk dramatically. Insect outbreaks are ravaging dried-out forests. Wildfires in California and across wider areas of the U.S. West are growing in area. While 2019 was a relatively wet year, leading to hope that things might be easing up, early indications show that 2020 is already on a track for resumed aridity.

In the Catalina Mountains in southern Arizona, forests struggle to keep up with recent increases in drought and wildfire activity, which are expected to continue due to human-caused climate change. (Park Williams/Lamont-Doherty Earth Observatory)

“There is no reason to believe that the sort of natural variability documented in the paleoclimatic record will not continue into the future, but the difference is that droughts will occur under warmer temperatures,” said Connie Woodhouse, a climate scientist at the University of Arizona who was not involved in the study. “These warmer conditions will exacerbate droughts, making them more severe, longer, and more widespread than they would have been otherwise.”

Angeline Pendergrass, a staff scientist at the U.S. National Center for Atmospheric Research, said that she thinks it is too early to say whether the region is at the cusp of a true megadrought, because the study confirms that natural weather swings are still playing a strong role. That said, “even though natural variability will always play a large role in drought, climate change makes it worse,” she said.

Tucked into the researchers’ data: the 20th century was the wettest century in the entire 1200-year record. It was during that time that population boomed, and that has continued. “The 20th century gave us an overly optimistic view of how much water is potentially available,” said Cook. “It goes to show that studies like this are not just about ancient history. They’re about problems that are already here.”

Without adaptation to climate change, 25% of global crop yields at risk
END_OF_DOCUMENT_TOKEN_TO_BE_REPLACED