The U.S. Federal Emergency Management Agency (FEMA) estimates that around 13 million Americans are living within a 100-year flood zone. But over the last few years, researchers have found that the government’s estimates are far lower than the ground realities.

A 2018 study published in the journal Environmental Research Letters states that, taking into account the risk of flooding from rivers, about 41 million people are exposed to flood risk. That roughly equals three times more than FEMA’s estimates of residents who live in areas with a 1 percent chance of floods striking during any year.

A calculation in mid-2020 estimated that at least 14.6 million properties are located in the 100-year flood zone, according to First Street Foundation, a group of New York-based academics and experts.

The threat of frequent flood events is growing, thanks to climate change. And the number of people and properties at risk from climate change-related disasters — not just flooding — is growing, too. During a recent webinar hosted by the Earth Institute’s Initiative on Communication and Sustainability, researchers explored why. State of the Planet followed up with some of the panel participants as well as other experts to learn more.

Stuck in a vicious cycle

“In America, we tend to say people should not have been living in these zones in the first place,” said Alexander de Sherbinin, a senior research scientist at the Earth Institute’s Center for International Earth Science Information Network. “I don’t think we can blame people who live in flood plains or those who moved to remote areas in forests that are at high risk of wildfire. That’s too simplistic.”

For instance, de Sherbinin said, his friend (who is not a scientist) always wanted to live in a coastal area. So, she bought a bay-side house in New Jersey that was separated from the water only by a narrow strip of land. She was aware that it had flooded during Hurricane Sandy and that the house was likely to get flooded again. But she was assured that it would only cost $15,000 to build stilts that would elevate the house from the ground and reduce the risk of flooding.

“Houses are sold out of self-interest. This is the kind of thing that’s happening in countless communities,” said de Sherbinin. “The issue of transparency regarding flood risk is a critical one.”

In some cases, wealthy people can exert influence to resist risk-mapping that would negatively impact their property values. In addition, town planners and mayors may be hesitant to declare large areas of their town off-limits to further construction, said de Sherbinin. After all, that lowers their tax base.

To make matters worse for homeowners, the cost of federal flood insurance is rising as climate change increases damages to homes. That means homeowner insurance payments may go from $600 a year to up to $3,000 to $6,000 by 2022. “That is going to affect low-income people particularly hard. They could potentially be at risk of losing their property,” says de Sherbinin.

The need for more transparency and regulations

In the past 20 years, flood-related disasters have cost the United States more than $845 billion in damages to homes, offices, and other infrastructure.

While in many cases, FEMA-funded home-buyout programs are the only way to help vulnerable communities move further inland, experts say there is also a need for more reliable and data and jargon-free flood risk information for buyers.

Yet, real-estate websites like Zillow, Redfin, and Trulia, have refused to share information about flood risk with users, according to NPR. But in August 2020, Realtor.com became the first site to let users know about every home’s flood risk and how climate change could increase that risk in the next few decades.

“This is because models are getting more accurate in terms of which areas are most likely to be at flood risk,” said de Sherbinin.

The threat of frequent flood events is growing, thanks to climate change

Some city governments are leading the way in creating and implementing such regulations. In Fort Collins, Colorado, city officials decided to pass stringent regulations in 2000 that prohibited construction in the Cache la Poudre River’s flood plain.

City officials made this decision after heavy rainfall in 1997 caused flash floods resulting in damages of more than $200 million. The disaster also claimed the lives of five residents.

The resulting regulations prohibited residential construction in 100-year flood plains, and non-residential developments were permitted only if they were at least two feet above the projected flood levels. Those interventions proved to be effective. In September 2013, while floods wreaked havoc in many other parts of Colorado, the new policy protected Fort Collins from any major structural damages or casualties. Out of the 14,000 structures that were built since the 1997 flood, only eight were damaged. 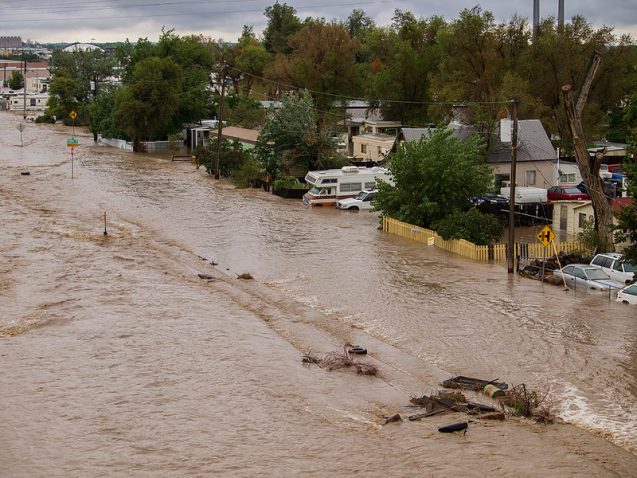 In 2004, the city of Brevard, North Carolina, also enforced strong regulations against construction in their flood plain after hurricanes Frances and Ivan in 2004.

“Such proactive initiatives are important because they send a message to the larger development community,” says Lightbody.

Why the growing threat of wildfires in the U.S. is challenging to tackle

In a study published in the journal Land Use Policy, researchers estimated that by 2050, the number of houses in high-risk wildfire zones might increase by nearly one million in California alone.

As populations grow and spread, the risk to people and property grows, creating an “expanding bull’s eye effect,” Stephen Strader, an assistant professor in the department of geography and the environment at Villanova University, said during the webinar. 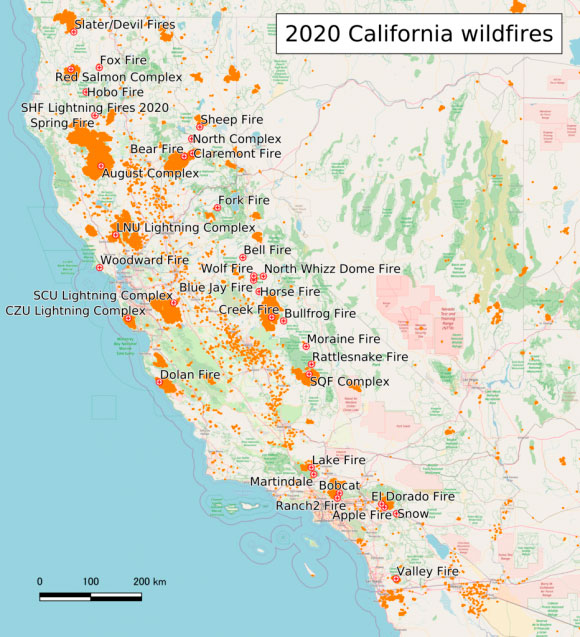 Map of wildfires in California in 2020. Image: Phoenix7777 on Wikimedia Commons

In 2020, 57,000 wildfires burned more than 10.3 million acres of land across California, Oregon, Washington State, and Idaho. In California, 31 people lost their lives and 10,500 structures were damaged.

Lisa Dale, a researcher who focuses on climate change adaptation policies at the Earth Institute, said that in the western parts of the U.S., trying to understand the gradations of risk is challenging. That is because everyone who lives outside of cities is likely in a wildfire risk zone.

“By definition, a forest is flammable. The biggest challenge for researchers and policymakers alike is to meaningfully assign gradations of risk to the millions of residents across the West. And also, to the many millions of acres of private property still available for sale in these areas,” she added.

In the past 20 years, flood-related disasters have cost the United States more than $845 billion in damages to homes, offices, and other infrastructure

Before Dale joined the Earth Institute, she worked with the State of Colorado to address wildfire risks among communities. She found that there was pushback from the real estate sector when the legislature considered more rigorous disclosure requirements so that a person buying a new house could be informed about that property’s wildfire risk.

To make the disclosure policy effective, Dale said they would have needed data specific to each property, which is “expensive, time-consuming, and potentially also a violation of privacy for homeowners.”

That is because it requires someone to knock on doors and ask for permission to assess the property in order to estimate the relative density of the forest close to the house, and then consider historical fire behavior, terrain, landscaping work done in the neighborhood, recent fires in the area, and other factors that contribute to wildfire risk.

“Wildfires are confounding and can take on a life of their own,” said Dale. “They are defying our historic models that allowed us to forecast risk. Once a crown fire — one that travels from treetop to treetop — gains strength, there is little that can be done on the ground to stop it.” 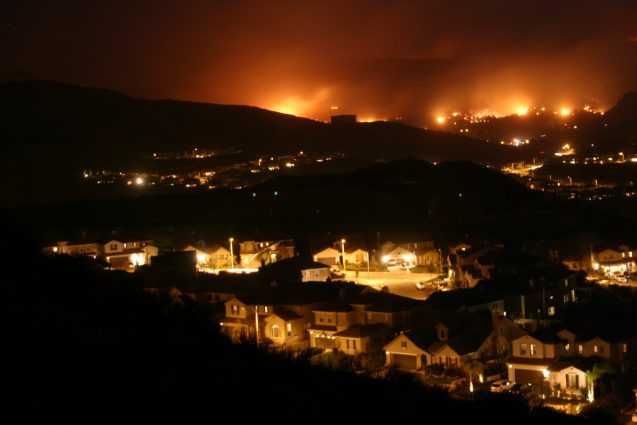 One of the biggest challenges, said Dale, is ginning up enough concern at the neighborhood level so that communities come together to devise neighborhood-wide wildfire risk-reduction strategies.

In some instances, entire neighborhoods may be eligible to apply for funding to reduce wildfire fuel across multiple parcels of private property in that community, she added.

Speaking with the State of the Planet, Carolynne Hultquist, a postdoctoral research scientist at Columbia University’s Center for International Earth Science Information Network and an affiliate with the International Research Institute for Climate and Society, said, “Scientists are also becoming more aware and realizing that it is not enough to just do good science. It is also important for us to engage with communities and stakeholders to try to tackle extreme weather events.”