Mars has lost most of its once plentiful water, with small amounts remaining in the planet’s atmosphere. ESA’s Mars Express now reveals more about where this water has gone, showing that its escape to space is accelerated by dust storms and the planet’s proximity to the Sun, and suggesting that some water may have retreated underground.

Although arid today, Mars was likely once a water-covered world like our own. Evidence of this is seen in images of vast, flood-formed outflow channels, river valleys and deltas carved into the planet’s surface, as well as in radar observations of liquid water reservoirs locked up beneath the ice and dust of Mars’ south pole.

Water can now only exist on Mars in the form of ice or gas due to the low atmospheric pressure on the planet, which is less than 1% that of Earth. Mars has lost much of its former water to space over the past few billion years, and is still leaking water from its atmosphere today.

Two new studies, led by Anna Fedorova of the Space Research Institute of the Russian Academy of Sciences and Jean-Yves Chaufray of the Laboratoire Atmospheres Observations Spatiales, France, now clarify how water moves through and leaves Mars’ atmosphere. They reveal that this process is affected by the planet’s distance from the Sun and changes in its climate and weather, including the massive global dust storms often seen on the planet.

Both studies used extensive, multi-year datasets obtained by the orbiter’s SPICAM instrument (Spectroscopy for the Investigation of the Characteristics of the Atmosphere of Mars).

“The atmosphere is the link between surface and space, and so has much to tell us about how Mars has lost its water,” says Anna. “We studied the water vapour in the atmosphere from the ground up to 100 km in altitude, a region that had yet to be explored, over eight martian years.” 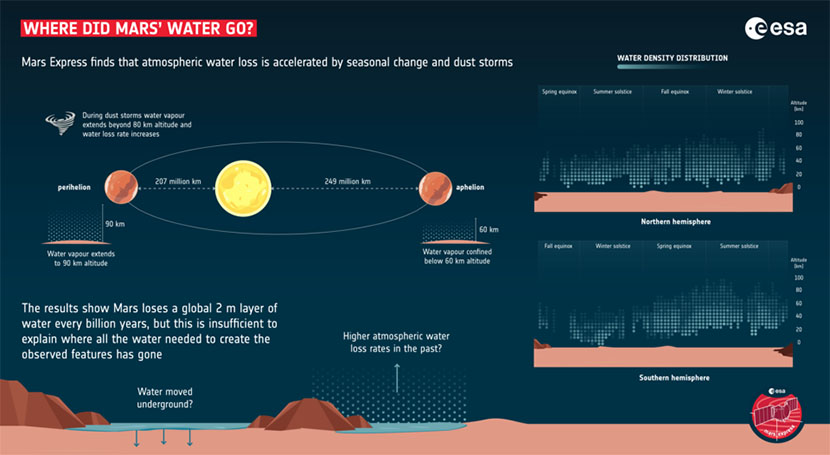 Anna and colleagues found that water vapour remained confined to below 60 km when Mars was far from the Sun but extended up to 90 km in altitude when Mars was closest to the Sun. Across a full orbit, the distance between the Sun and the Red Planet ranges from 207 million to 249 million km.

Near the Sun, the warmer temperatures and more intensive circulation in the atmosphere prevented water from freezing out at a certain altitude. “Then, the upper atmosphere becomes moistened and saturated with water, explaining why water escape rates speed up during this season – water is carried higher, aiding its escape to space,” adds Anna.

In years when Mars experienced a global dust storm the upper atmosphere became even wetter, accumulating water in excess at altitudes of over 80 km.

“This confirms that dust storms, which are known to warm and disrupt Mars’ atmosphere, also deliver water to high altitudes,” says Anna. “Thanks to Mars Express’ continuous monitoring, we were able to analyse the last two global dust storms, in 2007 and 2018, and compare what we found to storm-free years to identify how the storms affected water escape from Mars.”

This finding is supported by research led by Jean-Yves, which modelled the density of hydrogen atoms in Mars’ upper atmosphere over two years and explored how this related to water escape.

“We compared our results to SPICAM data and found good agreement – except during the dusty season, when our model underestimated just how much hydrogen was present,” says Jean-Yves. “Far more water escapes through the atmosphere during disturbed conditions than the model predicted.”

Across two martian years, one of which experienced a dust storm, Jean-Yves and colleagues estimated that the rate of water loss varied by a factor of about 100, highlighting the significant effect that dust storms can have on Mars’ rates of water loss.

The findings show that Mars loses the equivalent of a global two-metre-deep layer of water every billion years. However, even accumulated over Mars’ four-billion-year history, this amount is insufficient to explain where all of Mars’ water has gone.

“A significant amount must have once existed on the planet to explain the water-created features we see,” says Jean-Yves. “As it hasn’t all been lost to space, our results suggest that either this water has moved underground, or that water escape rates were far higher in the past.”

The results from Anna, Jean-Yves and colleagues complement recent findings by the ESA-Roscosmos ExoMars Trace Gas Orbiter (TGO), which, since 2018 and alongside Mars Express, has monitored the distribution of water by altitude in Mars’ atmosphere. These findings suggested that Mars’ rate of water loss may be linked to seasonal changes.

Mars Express’ work to determine Mars’ water loss is also supported by NASA’s MAVEN (Mars Atmosphere and Volatile Evolution) mission, which is systematically measuring the chemical composition of the martian atmosphere (specifically, the levels of atomic hydrogen and deuterium, a heavy isotope of hydrogen). Such multi-mission data will help constrain not only how water is currently behaving but also the cumulative water loss over martian history – vital to figure out whether Mars’ water has gone underground or to space.

“Two key themes in our ongoing exploration of Mars are the planet’s evolution and water loss, and the role of dust storms in shaping the martian climate and atmosphere,” says Dmitrij Titov, ESA’s Mars Express project scientist.

“These findings help us understand the longer-term processes behind Mars’ water loss and paint a picture of not only its present-day climatology, but how its climate has changed throughout history. For such studies we need the kind of high-quality datasets provided by SPICAM and also the instruments aboard ExoMars’ TGO. Together, these and other advanced missions will continue to unveil the mysteries of Mars.”

Mars Express launched on 2 June 2003, and has spent over 17 years in orbit at Mars carefully monitoring the properties of the planet’s atmosphere.