Climate change |
Water security
In recent times, extreme weather events do not seem to have spared any part of the world. A ‘one in a thousand year flood’ has just hit Australia’s southeast coast, forcing tens of thousands to evacuate. The disaster has raised questions about how prepared the country was for being at the forefront of severe climate change. Unprecedented flooding made headlines last year in Western Europe with worst-affected areas in Germany and Belgium, causing 238 deaths and over USD 20 billion of damage in Germany alone. Extreme rainfalls caused flash floods in Henan Province in China with over 200mm of rainfall per hour, causing 302 deaths and economic losses of USD 17 billion when buildings, roads, and subways were flooded.
At the other extreme is drought. Droughts usually get less media attention because they develop slowly over time. But like floods, their impacts are severe, costing many lives, causing economic harm, and often affecting the stability of countries and regions. Severe droughts are occurring in Eastern Africa and particularly in Madagascar, causing a severe famine with over 1 million people affected. In the western United States, a drought that started in 2000 is now the driest two decades in 1,200 years.
On Monday, the U.N.’s Intergovernmental Panel on Climate Change (IPCC) released a detailed report, Climate Change 2022: Impacts, Adaptation and Vulnerability, which reported with ‘high confidence’, that increasing weather and climate extreme events have exposed millions of people to reduced water security with the largest impacts in Africa, Asia, and Central and South America. Between 2010 and 2020, floods, droughts, and storms killed 15 times as many people in those regions than in rich ones. 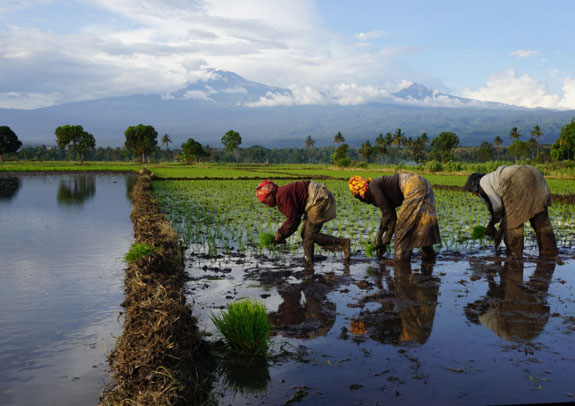 Tanzania - Uhakika wa Maji! Citizen-action, accountability monitoring and advocacy for water and climate security in Africa. Credit: GWP Water ChangeMaker Awards
After every extreme event, debates begin as to whether climate change is at fault. For many, such as the drought in western North America, the answer is yes. For others, in places such as South Sudan, Afghanistan, and Madagascar, the link between drought and climate change is less provable. If only climate hazards are present, the food insecurity level might be 2 or 3. If you add political conflict, war, internal population movements, and socio-economic factors such as market disruptions due to COVID, food insecurity levels can reach 4 or even 5 (famine disaster).
The IPCC reports confirms that climate change has caused and is projected to increasingly cause irreversible losses freshwater ecosystems. Roughly half the world’s population experiences severe water scarcity for at least some part of the year due to climatic and non-climatic drivers. In the 36-page summary for policymakers, water is cited nearly 70 times. Climate change and its impacts are regularly debated at annual U.N. Climate Conferences, the latest of which was held in Glasgow. Known as ‘COP 26’, its outcome might be called “good COP, bad COP.”

“Bad COP”, because each of the extreme events above should have urged governments to commit to serious and drastic emission reductions to mitigate the climate risks. However, this was done only partially and the world is off track to reach the 1.5° goal of the Paris agreement, steering instead toward a 2.6°C world. In that world, you might want to prepare to move – extreme weather events will leave many regions uninhabitable.
“Good COP”, because the conference finally recognized that reducing emissions (mitigation) on the one side and building resilience (adaptation) on the other side are equally important to reduce loss of life, destruction of livelihoods and economies, and environmental devastation. 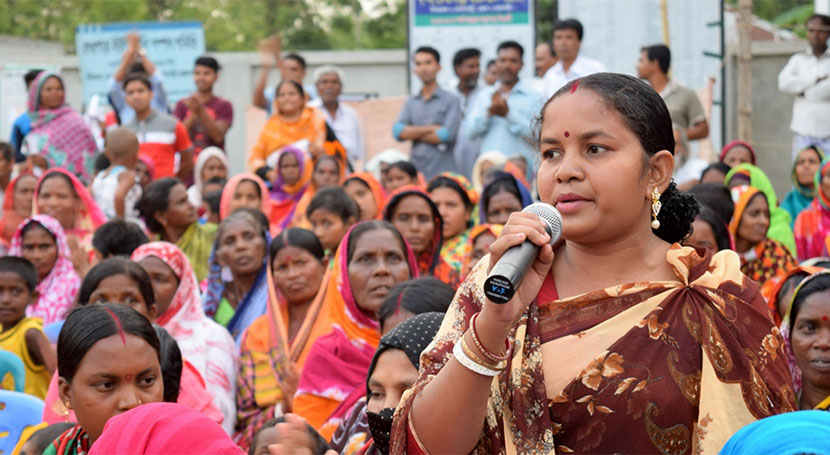 Mothers Parliament, Bangladesh. Credit: GWP
We know extreme weather events are going to happen so, instead of being reactive, waiting to provide relief after the event, we can plan preventative measures. For example, the Volta Basin in West Africa has been affected by flood and drought, generating social, economic, and environmental losses affecting almost two million people over the last 20 years. Currently there is a project being implemented to design a large-scale early warning system to alert civil protection services before disaster strikes, to reduce vulnerability, and to increase the capacity of communities in the basin to adapt to the new reality of worsening floods and droughts.
In Thailand and Laos, a community-based approach was applied in a project in four communities to develop flood preparedness capacities such as risk assessments, early warning systems, institutional preparedness and coordination, risk maps, and emergency response training to enhance community preparedness and resilience.
Of course, these projects need massive investment to scale them up to cover larger areas that are under threat. Other measures, such as dams or reservoirs and land-use planning, need to be financed to further reduce the impacts from future flood events.
So we know what to do. It is within our power to prevent extreme weather events from becoming catastrophes that lead to loss of life and economic disaster. Governments need to invest in early warning and monitoring systems, develop smart flood and drought policies with anticipatory actions, and plan institutional responses to protect vulnerable communities.
Darío Soto-Abril is the Executive Secretary of Global Water Partnership (GWP). Valentin Aich, GWP’s
Senior Water and Climate Specialist contributed to this piece and works with the Integrated Drought Management Programme and the Associated Programme on Flood Management