Climate risk and decarbonization: What every mining CEO needs to know

McKinsey & Company
We help organizations across the private, public, and social sectors create Change that Matters. With exceptional people in 65 countries, we combine global expertise and local insight to help you turn your ambitious goals into reality.
TwitterFacebookLinkedInYoutubeWeb

In the mining industry, the impact of climate change and how the industry can respond to it has increasingly been a topic of discussion over the past decade.

Mining is no stranger to harsh climates; much of the industry already operates in inhospitable conditions. But forecasts of hazards such as heavy precipitation, drought, and heat indicate these effects will get more frequent and intense, increasing the physical challenges to mining operations.

Under the 2015 Paris Agreement, 195 countries pledged to limit global warming to well below 2.0°C, and ideally not more than 1.5°C above preindustrial levels. That target, if pursued, would manifest in decarbonization across industries, creating major shifts in commodity demand for the mining industry and likely resulting in declining global mining revenue pools. Mining-portfolio evaluation must now account for potential decarbonization of other sectors.

Water-stress hot spots are expected to worsen in the coming decades. In Chile, 80 percent of copper production is already located in extremely high water-stressed and arid areas; by 2040, it will be 100 percent

The mining sector itself will also face pressure from governments, investors, and society to reduce emissions. Mining is currently responsible for 4 to 7 percent of greenhouse-gas (GHG) emissions globally. Scope 1 and Scope 2 CO2 emissions from the sector (those incurred through mining operations and power consumption, respectively) amount to 1 percent, and fugitive-methane emissions from coal mining are estimated at 3 to 6 percent. A significant share of global emissions—28 percent—would be considered Scope 3 (indirect) emissions, including the combustion of coal.

The mining industry has only just begun to set emission-reduction goals. Current targets published by mining companies range from 0 to 30 percent by 2030, far below the Paris Agreement goals. Mines theoretically can fully decarbonize (excluding fugitive methane) through operational efficiency, electrification, and renewable-energy use. Capital investments are required to achieve most of the decarbonization potential, but certain measures, such as the adoption of renewables, electrification, and operational efficiency, are economical today for many mines.

To address climate risk for miners, we examine three questions in this article: Which mining assets are most at risk from physical climate change? How could decarbonization shift demand for key minerals? And how can mining companies decarbonize their own operations? We then lay out the operational, investment, and portfolio options that mining executives can use to create an actionable climate strategy and set ambitious targets.

Despite changing climate conditions, options exist to improve the resiliency of mining assets to certain physical effects. We evaluated the impact of water stress and flooding in detail and suggest how operators might mitigate these risks.

Climate change is expected to cause more frequent droughts and floods, altering the supply of water to mining sites and disrupting operations. We recently ran and analyzed a water-stress and flooding scenario using McKinsey’s MineSpans database on copper, gold, iron ore, and zinc

We found that today, 30 to 50 percent of production of these four commodities is concentrated in areas where water stress is already high. In 2017, these sites accounted for roughly $150 billion in total annual revenues and were clustered into seven water-stress hot spots for mining: Central Asia, the Chilean coast, eastern Australia, the Middle East, southern Africa, western Australia, and a large zone in western North America. 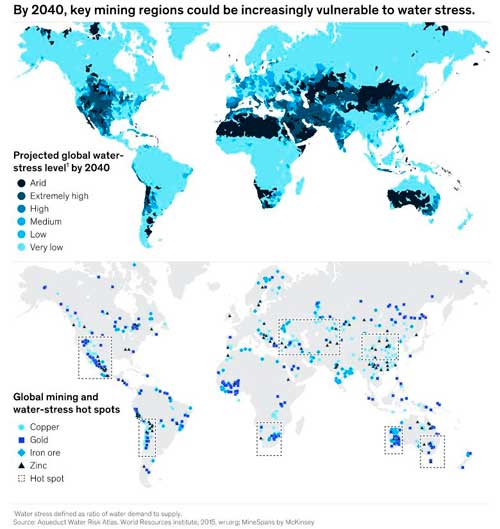 Climate science indicates that these hot spots will worsen in the coming decades. In Chile, 80 percent of copper production is already located in extremely high water-stressed and arid areas; by 2040, it will be 100 percent. In Russia, 40 percent of the nation’s iron ore production, currently located in high water-stressed areas, is likely to move to extreme water stress by 2040.

In the long term, more capital-intensive approaches are also possible. New water infrastructure, such as dams and desalination plants, is expensive but sometimes necessary

Mining executives in these regions are acutely aware of the water issue. For instance, Leagold Mining recently shut down its RDM gold mine in Brazil for two months because of drought conditions, even though it had built a dam and a water pipeline. Even in areas with low water stress, certain water-intensive mining processes are jeopardized. In Germany—not a country known for being vulnerable to drought—a potash miner was forced to close two locations because of severe water shortages in the summer of 2018, losing nearly $2 million a day per site. The frequency and severity of these conditions are expected to increase along with the current climate trajectory.

Since water stress is likely to increase at different rates from place to place, mining executives will need to look at local water-stress projections for their individual sites and determine where the worst effects are likely to occur.

To improve resiliency, companies can reduce the water intensity of their mining processes. They can also recycle used water and reduce water loss from evaporation, leaks, and waste. Anglo American improved evaporation monitoring at its Drayton mine dam in Australia, for example. Mining companies can prevent evaporation by putting covers on small and medium dams.

In the long term, more capital-intensive approaches are also possible. New water infrastructure, such as dams and desalination plants, is expensive but sometimes necessary. Companies can also rely on so-called natural capital, like wetland areas, to improve groundwater drainage.

The option of securing water rights is becoming harder and can take years of engagement because of increased competition for natural resources and tensions between operators and local communities. Basin and regional planning with regulatory and civic groups is an important strategy but cannot alone solve the underlying problem of water stress.

Flooding from extreme rains can also cause operational disruptions, including mine closure, washed-out roads, and unsafe water levels in tailing dams. At one open-pit coal mine, we observed 10 percent annual production losses from wet weather. Flooding affects some commodities more than others, based on their location; in our analysis, iron ore and zinc are the most exposed to extremely high flood occurrence, at 50 percent and 40 percent of global volume, respectively.

To address high-water concerns, companies can adopt flood-proof mine designs that improve drainage and pumping techniques. They can adapt roads (such as by using hard metal or crusted rock for speed drying) or build sheeted haul roads, as First Quantum Minerals did at its Sentinel copper mine in Zambia. They can also use conveying methods that don’t rely on trucking (such as by creating a full in-pit crushing and conveying system).