In cities growing in both size and thirst across the globe, sustainability is constrained by the gray of dams and water treatment facilities.  In this week’s Nature Sustainability, research by Michigan State University scientists advocate going green to ensure water supplies.

The scientists took novel approaches to scrutinizing how 317 cities worldwide get freshwater and other adjacent and distant ecosystem services. Turns out high-profile built infrastructure – human-made ways of moving water can reduce water quality and damage water supplies at their source.

To sustainability scientist Jianguo “Jack” Liu, the study is another example of the need to balance human needs and impacts of nature. This paper sheds light on the delicate balance between built and green infrastructure and providing policymakers with ways to address the needs of both.

“Supplying adequate water to rapidly growing cities in a time already marked by water insecurities and climate change requires a holistic coupled human and natural system approach,” said Liu, the MSU Rachel Carson Chair in Sustainability and director of the Center for Systems Integration and Sustainability. “It’s not enough just to engineer ways to move water. You have to also understand how nature reacts and what it can provide.”

Cities are imposing human will on water supplies not only with dams and treatment facilities, but with “impervious surfaces” which are hard areas like streets, roofs and parking lots that don’t allow water to seep into the ground. When water finds its way into storm drains and rivers, it has picked up pollutants. The group deployed the metacoupling framework, a new integrated tool for researchers to systematically understand human-nature interactions nearby and far away. This framework expands sustainability science from a focus on specific places separately to human-nature interactions across adjacent and distant places.

That’s particularly important with water, since often cities are drawing from areas far away, and sometimes imposing hardships in the process that can damage the very supplies they covet.

Since the early 20th century, almost 90% of watersheds providing water to cities have experienced a reduction in water quality, which directly affects water for drinking and recreation in cities.

“These relationships between built infrastructure and natural infrastructure become more complicated as cities are increasingly reliant not only on surrounding watersheds but also on distant watersheds as more infrastructure like dams and aqueducts are built,” added Chung recently received hi PhD at MSU and is a postdoctoral researcher at University of California, Merced.

Since the early 20th century, almost 90% of watersheds providing water to cities have experienced a reduction in water quality

Besides freshwater for drinking and recreation, natural infrastructure also provides many other ecosystem services associated with freshwater, such as sediment regulation, flood mitigation and hydropower production.

The work can help guide policymakers to effectively integrate the greens of forests and watersheds across water’s supply chain, as well as bring more green to cities by way of parks and green roofs. 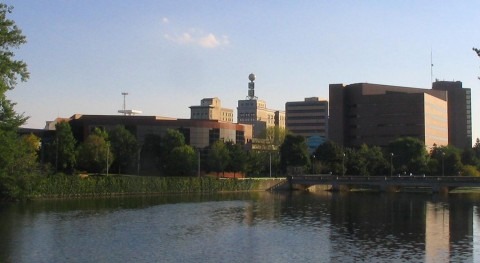