NASA satellite data continues to provide a look at the smoke and aerosols generated by the massive fires in Australia. Although rain fell on parts of the fire-ravaged areas in New South Wales and Victoria, Australia (and in some areas the rain was torrential), officials are already warning residents that the fires (and resultant smoke and aerosols) will return to their former state with a vengeance by Thursday when hot, dry weather and winds return.  The next misery facing Australia is the chance that fires will soon merge creating mega-fires to fight in the already devastated areas. Rains should do nothing more than give residents a moment to regroup before the fires regain their former wrath. Even with the respite from the rain, the haze and smoke in the area remains in the hazardous range. NOAA-NASA captured this stunning satellite image of the areas affected by the fire and smoke on January 04, 2020. The rains did not come in to affect the fires until Jan. 05-06.  In this satellite image, the smoke coming off the fires can be clearly as billowing clouds of brown-gray in three separate plumes from north to south. 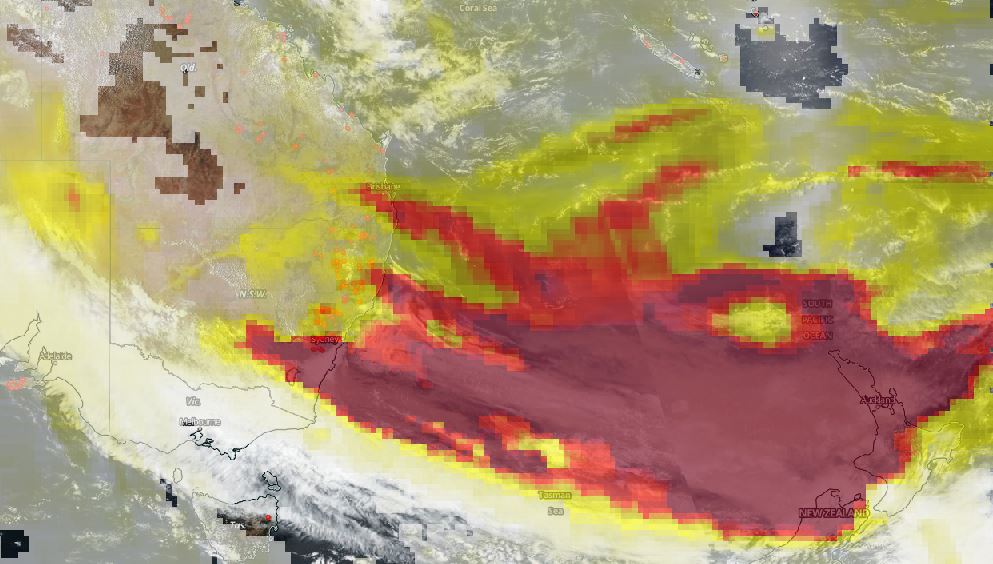 This Suomi-NPP satellite image from Jan. 04, 2020 shows the aerosols within the smoke plumes from the fires in Australia. The deeper the red in the image, the higher amount of aerosols are present in the smoke. The Aerosol Index layer is useful for identifying and tracking the long-range transport of volcanic ash from volcanic eruptions, smoke from wildfires or biomass burning events and dust from desert dust storms, even tracking over clouds and areas of snow and ice. Credits: NOAA/NASA

The image above shows the massive amounts of particles within the smoke that are rising into the atmosphere.  These particles consist of soot, dust, and other dangerous inhalants which can affect human health. Aerosols compromise human health when inhaled by people with asthma or other respiratory illnesses. Aerosols also have an affect on the weather and climate. The Suomi NPP satellite OMPS (Ozone Mapper and Profiler Suite) instrument onboard found that the majority of the smoke spewing from the fires have aerosols at or above the highest levels that can be measured by the instrument. The deep red color is indicative of the highest amount of aerosols within the smoke plumes. As the colors back off from deep red to red, orange, yellow and lighter yellow the aerosols lessen within the smoke. 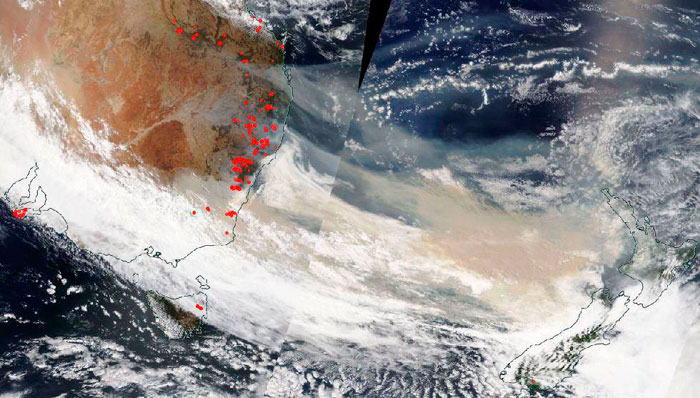 The image above is just a reminder that smoke does not stay in one place. Looking at Australia from a farther distance in this Aqua satellite image taken on Jan. 05, 2020, it is evident that the smoke plumes coming off the fires are traveling on wind currents and are heading for the neighboring country of New Zealand which is just over a thousand miles away. The skies over New Zealand, once clear, are now turning a very dangerous orange hue and by Sunday, Jan. 05, the sun had been blotted out in Auckland, New Zealand. Beyond coloring the sky an angry orange, dirty orange-brown soot can now be found on the glaciers in South Island, New Zealand.

NASA’s satellite instruments are often the first to detect wildfires burning in remote regions, and the locations of new fires are sent directly to land managers worldwide within hours of the satellite overpass. Together, NASA instruments detect actively burning fires, track the transport of smoke from fires, provide information for fire management, and map the extent of changes to ecosystems, based on the extent and severity of burn scars. NASA has a fleet of Earth-observing instruments, many of which contribute to our understanding of fire in the Earth system. Satellites in orbit around the poles provide observations of the entire planet several times per day, whereas satellites in a geostationary orbit provide coarse-resolution imagery of fires, smoke and clouds every five to 15 minutes. For more information visit: https://www.nasa.gov/mission_pages/fires/main/missions/index.html