Seven Earth-sized planets orbit the star TRAPPIST-1 in near-perfect harmony, and U.S. and European researchers have used that harmony to determine how much physical abuse the planets could have withstood in their infancy.

“After rocky planets form, things bash into them,” said astrophysicist Sean Raymond of the University of Bordeaux in France. “It’s called bombardment , or late accretion, and we care about it, in part, because these impacts can be an important source of water and volatile elements that foster life.”

In a study available online today in Nature Astronomy, Raymond and colleagues from Rice University’s NASA-funded CLEVER Planets project and seven other institutions used a computer model of the bombardment phase of planetary formation in TRAPPIST-1 to explore the impacts its planets could have withstood without getting knocked out of harmony.

Deciphering the impact history of planets is difficult in our solar system and might seem like a hopeless task in systems light-years away, Raymond said.

“On Earth, we can measure certain types of elements and compare them with meteorites,” Raymond said. “That’s what we do to try to figure out how much stuff bashed into the Earth after it was mostly formed.”

But those tools don’t exist for studying bombardment on exoplanets.

“We'll never get rocks from them,” he said. “We're never going to see craters on them. So what can we do? This is where the special orbital configuration of TRAPPIST-1 comes in. It’s a kind of a lever we can pull on to put limits on this.”

TRAPPIST-1, about 40 light-years away, is far smaller and cooler than our sun. Its planets are named alphabetically from b to h in order of their distance from the star. The time needed to complete one orbit around the star – equivalent to one year on Earth – is 1.5 days on planet b and 19 days on planet h. Remarkably, their orbital periods form near-perfect ratios , a resonant arrangement reminiscent of harmonious musical notes . For example, for every eight “years” on planet b, five pass on planet c, three on planet d, two on planet e and so on. 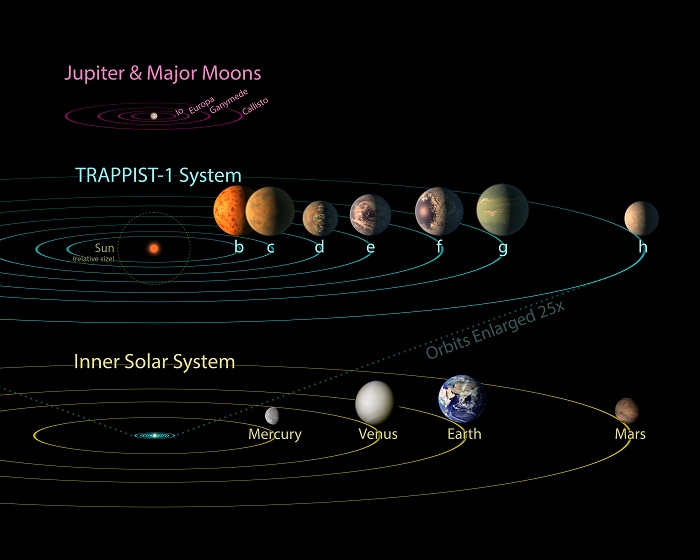 TRAPPIST-1’s planets compared to Jupiter’s moons and planets in the solar system. (Image courtesy of NASA/JPL-Caltech)

“We can’t say exactly how much stuff bashed into any of these planets, but because of this special resonant configuration, we can put an upper limit on it,” Raymond said. “We can say, ‘It can't have been more than this.’ And it turns out that that upper limit is actually fairly small.

“We figured out that after these planets formed, they weren't bombarded by more than a very small amount of stuff,” he said. “That's kind of cool. It's interesting information when we're thinking about other aspects of the planets in the system.”

Planets grow within protoplanetary disks of gas and dust around newly formed stars. These disks only last a few million years, and Raymond said previous research has shown that resonant chains of planets like TRAPPIST-1’s form when young planets migrate closer to their star before the disk disappears. Computer models have shown disks can shepherd planets into resonance. Raymond said it’s believed that resonant chains like TRAPPIST-1’s must be set before their disks disappear.

The upshot is TRAPPIST-1’s planets formed fast, in about one-tenth the time it took Earth to form, said Rice study co-author Andre Izidoro, an astrophysicist and CLEVER Planets postdoctoral fellow.

CLEVER Planets, led by study co-author Rajdeep Dasgupta, the Maurice Ewing Professor of Earth Systems Science at Rice, is exploring the ways planets might acquire the necessary elements to support life. In previous studies, Dasgupta and colleagues at CLEVER Planets have shown a significant portion of Earth’s volatile elements came from the impact that formed the moon.

“If a planet forms early and it is too small, like the mass of the moon or Mars, it cannot accrete a lot of gas from the disk,” Dasgupta said. “Such a planet also has much less opportunity to gain life-essential volatile elements through late bombardments.”

Izidoro said that would have been the case for Earth, which gained most of its mass relatively late, including about 1% from impacts after the moon-forming collision.

“We know Earth had at least one giant impact after the gas (in the protoplanetary disk) was gone,” he said. “That was the moon-forming event.

“For the TRAPPIST-1 system, we have these Earth-mass planets that formed early,” he said. “So one potential difference, compared to the Earth's formation, is that they could have, from the beginning, some hydrogen atmosphere and have never experienced a late giant impact. And this might change a lot of the evolution in terms of the interior of the planet, outgassing, volatile loss and other things that have implications for habitability.”

Raymond said this week’s study has implications not only for the study of other resonant planetary systems, but for far more common exoplanet systems that were believed to have begun as resonant systems.

“Super-Earths and sub-Neptunes are very abundant around other stars, and the predominant idea is that they migrated inward during that gas-disk phase and then possibly had a late phase of collisions,” Raymond said. “But during that early phase, where they were migrating inward, we think that they pretty much – universally maybe – had a phase where they were resonant chain structures like TRAPPIST-1. They just didn't survive. They ended up going unstable later on.”

“We have some constraints today on the composition of these planets, like how much water they can have,” Izidoro said of planets that form in a resonant, migration phase. “But we have very big error bars.”

In the future, observations will better constrain the interior composition of exoplanets, and knowing the late bombardment history of resonant planets could be extremely useful.

“For instance, if one of these planets has a lot of water, let's say 20% mass fraction, the water must have been incorporated into the planets early, during the gaseous phase,” he said. “So you will have to understand what kind of process could bring this water to this planet.”