SciDev.Net
SciDev.Net is the world’s leading source of reliable and authoritative news, views and analysis about science and technology for global development.
TwitterFacebookLinkedInYoutubeWeb

High levels of antibiotic residues, other medicines and chemicals present in Bangladesh’s ponds, canals, lakes, rivers and other surface waters are contributing to a spike in antibiotic resistance in the country, says a new study.

Antibiotic resistance results from microorganisms (such as bacteria, fungi, viruses and parasites) mutating when exposed to antimicrobial drugs that become ineffective in the prevention, treatment and spread of infectious diseases, according to the WHO.

Factors that make low- and middle-income countries like Bangladesh vulnerable to increased emergence and spread of anti-microbial resistance in the environment include poor regulation of antimicrobial drug use, high volume of antimicrobials used in human medicine and agricultural production and poor wastewater management, the study noted.

Published 10 April in Science of the Total Environment, the study found concentrations of ciprofloxacin and clarithromycin to be the highest. Other antibiotics found in the surface waters of rural and urban Bangladesh include amoxicillin, clindamycin, lincomycin, linezolid, metronidazole, moxifloxacin, nalidixic acid and sulfapyridine.

The study findings were based on an analytical technique (chromatography-mass spectrometric analysis) that measures the mass-to-charge ratio of ions. A total of 17 water samples were taken from ponds, canals, lakes, rivers, household hand pumps and sites near submersible pumps and wastewater treatment plants from April to May 2019.

“Because these waters are key sources of consumption for humans, animals and irrigation purposes, dumping of antibiotic residues has become a leading cause for enhanced multi-drug resistance in bacteria that cause diseases in humans, animals and agriculture crops,” says Luisa Angeles, lead study author and research scholar at the State University of New York.

According to Angeles, antibiotic residues are continuously released into the natural aquatic environment from hospital wastewater outlet pipes and wastewater treatment plants.

Non-antibiotic drugs and other micro-pollutants are adding to antibiotic-resistance, the study found. For example, the anti-depressant fluoxetine has been found to promote bacterial mutation, which leads to multiple resistance of Escherichia coli to antibiotics such as fluoroquinolones, β–lactams, aminoglycosides, tetracycline, and chloramphenicol.

“The assessment led to the discovery that five agricultural fungicide compounds — namely hexaconazole, imidacloprid, propiconazol, tebuconazole and tricyclazole — were prominently present in the water samples, showing their largescale use to kill farm pests,” Angeles tells SciDev.Net.

“Ubiquity of antifungal agents in urban and rural waters is of grave worry, as it may be contributing to the alarming rise of multi-drug resistant fungal diseases (such as Candida auris) recently seen in humans throughout the world,” the study said.

Despite elevated risks and growing cases of antibiotic resistance in the country, there is a lack of information about the types, quantity and scale of antibiotics prevalence in surface waters that hampers action to mitigate the risks, says Hanan Balkhy, assistant director-general for antimicrobial resistance at WHO, Geneva.

He suggests that Bangladesh build a system-wide health-care strategy to promote sane and responsible use of antibiotics in humans, farm animals and crops through evidence-based interventions and actions at the individual and national levels. 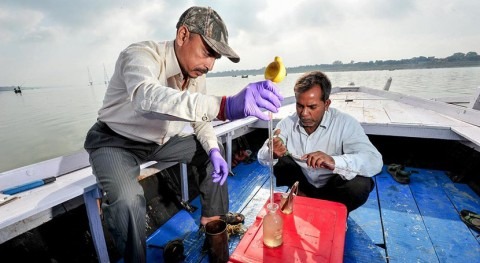