In south-central Nepal's Palpa district, which spans from the country's hillsides to its southern lowlands, farmers can grow a huge range of crops, from coffee to paddy rice, lychees to wheat.

But none of the crops grow without water - and that is increasingly in short supply in Palpa, as climate change brings more weather extremes.

"Scarcity of water for irrigation in many parts of Palpa has become a major hurdle to realise the agriculture potential of the district," said Ashok Kumar Shahi, mayor of Tansen, the district's main municipality.

But a government-led effort to help farmers build plastic-lined storage ponds to catch more water at wet times of the year, and save it for dry periods, is now making life easier for many formerly water-short farmers.

"Rainfall patterns have become erratic, resulting in a very heavy rainfall at one time and drought conditions at the other," Shahi said.

"Water harvesting can be a crucial technology for farmers at such times," he added. 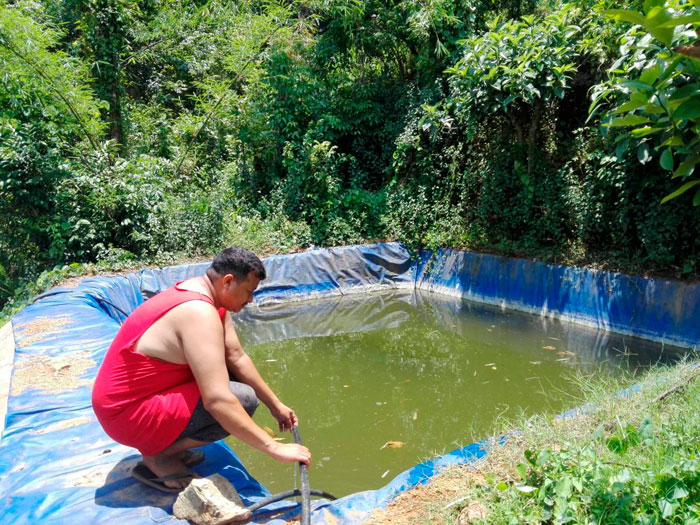 Madan Gharti Chhetri built one of the ponds two years ago, after returning from working abroad when his first son was born.

"In earlier years natural reserves were filled sufficiently all year round but we have to struggle for water these days," said the farmer in Madanpokhara, a village near Tansen.

But the 60,000-litre pond - which holds enough water to fill about 400 bathtubs - now gives him a reliable source of irrigation water, he said.

The storage pond catches runoff from a nearby natural spring at wet times of year and keeps it from draining away.

The retained water then can be used to irrigate crops using what Gharti Chhetri called "modern methods of irrigation, such as sprinkle and drip". Under a 10-year government programme to promote construction of such plastic-lined ponds, farmers can get plastic sheeting with an 85 percent subsidy through a government irrigation project.

Last year, about 150 farmers received the lining under the programme, which began in 2016, said Ram Parsad Pandey, a senior agriculture officer with the Prime Minister Agriculture Modernization Project.

This year the government has allocated 5 million rupees ($36,000) to the project, he said.

"One of the major benefits ... is a switch from cereal crops to high value vegetables," Pandey said.

Some farmers are feeding their water storage ponds with rainwater captured in roof gutters on their home and directed to the ponds, they said. 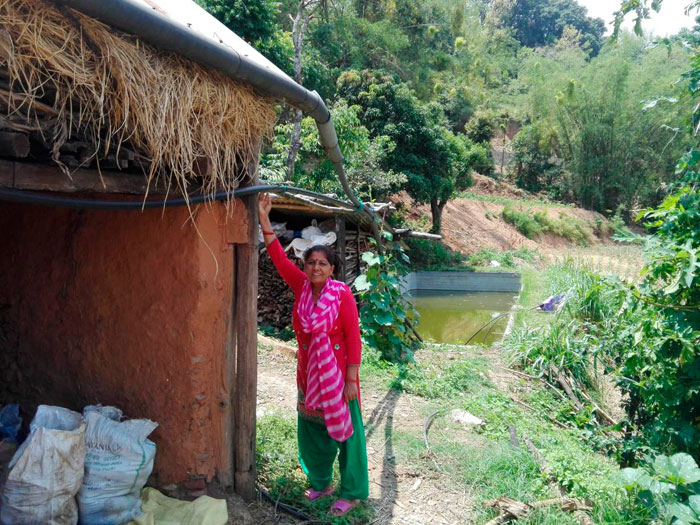 Kamala Ghimire stands below gutters that direct the rainwater that falls on her roof to her concrete-lined storage pond in Madanpokhara, Nepal, June 8, 2019. Thomson Reuters Foundation/Aadesh Subedi

Kamala Ghimire, a farmer in Madanpokhara who has put in place a concrete-lined water pond, said having stored water at home is a huge time saver.

"Earlier I used to walk about 20 minutes to carry water and it is impossible to farm on a larger scale carrying water to irrigate each plant," she said.

Shahi, the mayor of Tansen, said that to adapt to fast-changing climatic conditions, farmers also need access to crop varieties resistant to both drought and flooding - something they do not yet have.