In a good year, farmer and mother-of-four Zahra Tawakole can produce enough potatoes from her hectare of land in the small Afghan village of Raquel to get her family through to the next harvest.

Over the past two decades, however, weather patterns have become more extreme, Tawakole said, with flooding and dry spells devastating farms in central Afghanistan's Bamiyan province that rely on rainfall and seasonal snowmelt rivers for irrigation.

"Many farmer families have already left, saying life has become too difficult. They move either to cities like Kabul, or even to neighbouring countries like Iran," Tawakole said.

This year, the farmers in Raquel are entrusting the success of their crops to a new system of concrete irrigation canals that will divert water from a small snowmelt river 6km (3.7 miles) away to more than 200 hectares (494 acres) of farmland.

Similar structures are being constructed or rehabilitated throughout the country, as climate change-induced flooding, reduced snowfall and poor irrigation infrastructure make it increasingly difficult for farmers to find enough water.

"Climate change has seen this resource dwindle, affecting the entire nation, which depends on the rivers that irrigate many provinces," said Rajendra Aryal, the country representative for the U.N.'s Food and Agriculture Organization (FAO).

But locals and officials say measures to help Afghanistan's struggling farmers get reliable, adequate access to water could also exacerbate rising tensions between the country and its neighbours, who also depend on Afghanistan's water supplies.

The biggest source of tension is the Helmand River, which both Afghanistan and Iran depend on for agriculture and drinking water.

The river constitutes more than 40% of Afghanistan's surface water, say water experts, and runs about 1,125km (700 miles) southwest from the Hindu Kush mountains into Iran.

"Afghanistan and Iran both share a hot climate in summer and depend on water, but there isn't enough. We're increasingly fighting over water," said Sheer Agha Noorzai, a farmer in the southern Nimroz province. 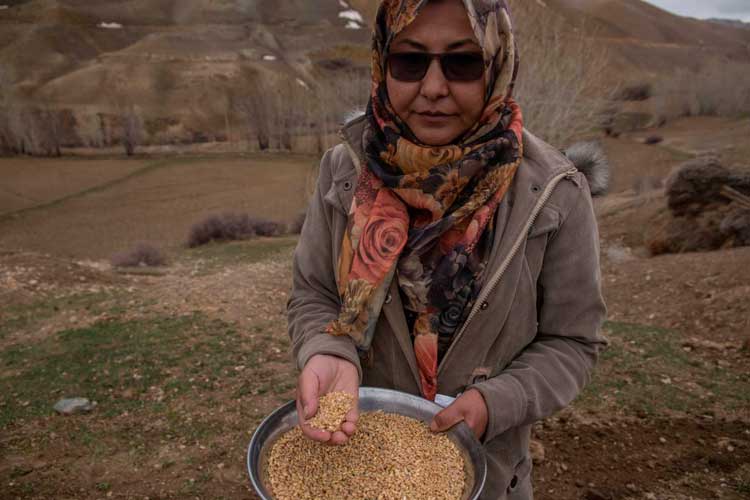 Zahra Tawakole, 38, a mother of four and farmer from Raquel village, explained that, over the past decades, she’s seen weather patterns of either raging meltwater floods destroying her family’s crops, or warm winters and limited snowfall yielding little irrigation help in the spring’s planting season on April 12, 2020. Thomson Reuters Foundation/Stefanie Glinski

The central highlands, where Bamiyan is located, are the source of nearly all of Afghanistan's water, filling the majority of the country's river systems.

With some of the country's largest water reserves - made up of rainwater and snowmelt coming down the Hindu Kush mountains - and crop-friendly temperatures, agricultural experts say Bamiyan could become a breadbasket for the nation.

"Bamiyan has huge potential to grow more diverse crops if irrigation can be regulated," said Aryal.

Currently, he noted, farmers are cultivating about 75,000 hectares (185,300 acres) of land in Bamiyan, nearly a quarter of it dependent on rain for water.

With proper irrigation another 137,000 hectares (338,500 acres) of uncultivated land - an area slightly smaller than Greater London - could be utilised, he said.

Now, however, about half of the water coming from the mountains ends up either seeping into the ground or flowing directly into rivers like the Helmand River and isn't used to irrigate farmland, explained Bamiyan's former governor Tahir Zuhair.

At the same time, hotter temperatures and increasingly frequent droughts are leading to less rain and snowfall and driving more evaporation from water sources, according to the Ministry of Energy and Water.

The combination of those factors has caused water levels to drop by 10 billion cubic metres over the past few years, it said in 2018.

"Saving water through new canals is not only important for Bamiyan, but has implications for the whole country," Zuhair told the Thomson Reuters Foundation.

Much of the melting snow in Afghanistan's central highlands makes its way to rivers that cross the country's borders into neighbouring nations such as Iran and Pakistan, and disputes over access to those waters are long-running.

Noorzai's farm is on the Iran border, about 1,000km (620 miles) from Bamiyan, and relies on the Helmand for irrigation.

A 1973 water agreement was supposed to share resources equitably, but both sides say the other is using more than its fair share.

Afghanistan has said that Iran is taking more than the 26 cubic metres of water per second that it was allocated, funnelling it out of the Hamoun wetlands - where the Helmand empties out - and into man-made lakes.

Iran says Afghanistan is holding back more water than it is entitled to, pointing to the two hydroelectric dams that Afghanistan has built across the Helmand, with another in construction in Nimroz.

"The hardest part of our work in Nimroz is to control the border," explained the province's governor Sayed Sultan.

"Because of the war, Iran has taken more water than agreed to. Part of the problem is that the exact amount was never measured," Sultan said.

Forty years of war have made it impossible for Afghanistan to properly measure how much water is crossing its borders, he added. 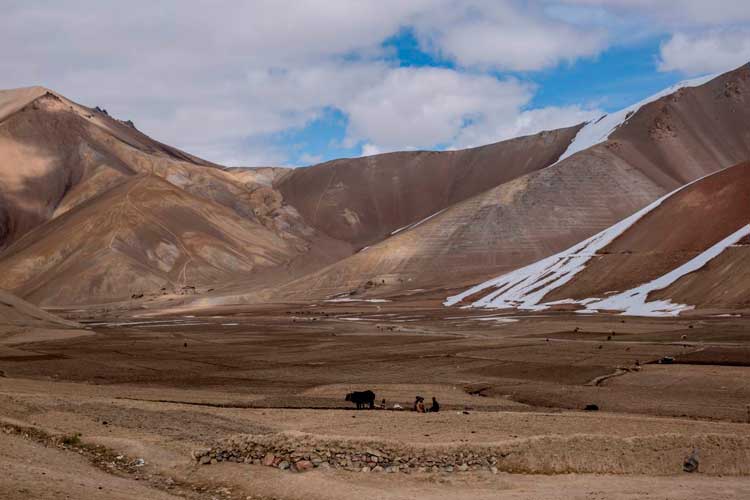 "We are merely receiving seasonal floodwater from the Helmand," he said, adding that dams on the Afghan side were damaging the environment.

Decreasing water levels in the Helmand and other rivers that run out of Afghanistan will eventually reduce the volume of water flowing into Iran, explained Martina Klimes, advisor for Water and Peace at the Stockholm International Water Institute.

"This will affect both countries severely, but can also possibly worsen their bilateral relations on water issues as some might be under the impression that Afghanistan's dams have caused the decreased flow," she noted.

Both countries are now working together to set up a new water measurement station at the border where the Helmand crosses into Iran, that will determine how much water actually flows over the border.

Food shortages give an added urgency to Afghanistan's struggle to secure and manage its water supplies.

The Integrated Food Security Phase Classification (IPC) issued in May said that about 10.9 million people in Afghanistan - roughly a third of the population - are considered acutely food insecure.

Non-profits and officials hope that building better irrigation canals in Bamiyan can help farmers in the area grow enough to boost food security for the wider region.

Asim Farid, the governor for Yawkalang district in Bamiyan, said the 6km (3.7 miles) of cement canals, due to be completed in the spring, could yield 30% more water than the unlined canals that farmers build themselves.

The system will also include large basins to capture flood water, simultaneously stopping it from destroying crops and storing the water for use in dry weather, he said.

In Raquel, farmer Zahra Tawakole believes the new canals will help the village for the time being, but she worries about the increasingly warming winters.

"Improved irrigation canals are an option for now, but we will need to be able to adapt to the long-term consequences of climate change," she said.