“Jack and Jill went up the hill to fetch a pail of water.” It’s a silly rhyme, but one that highlights a simple fact: Humans have long relied on wells — such as the one on the hill visited by Jack and Jill — for their primary drinking water supply.

Although the number of people who draw their water by pail is declining as pumps become ever more widespread, groundwater wells still supply drinking water to more than half of the world’s population and sustain over 40% of irrigated agriculture. But this vital resource underfoot often gets overlooked.

“We analyzed construction records for tens of millions of groundwater wells around the world,” said Jasechko, of the university’s Bren School of Environmental Science & Management, “and the big take home is that many wells are at risk of running dry.” Up to one in five wells in their survey, to be exact. 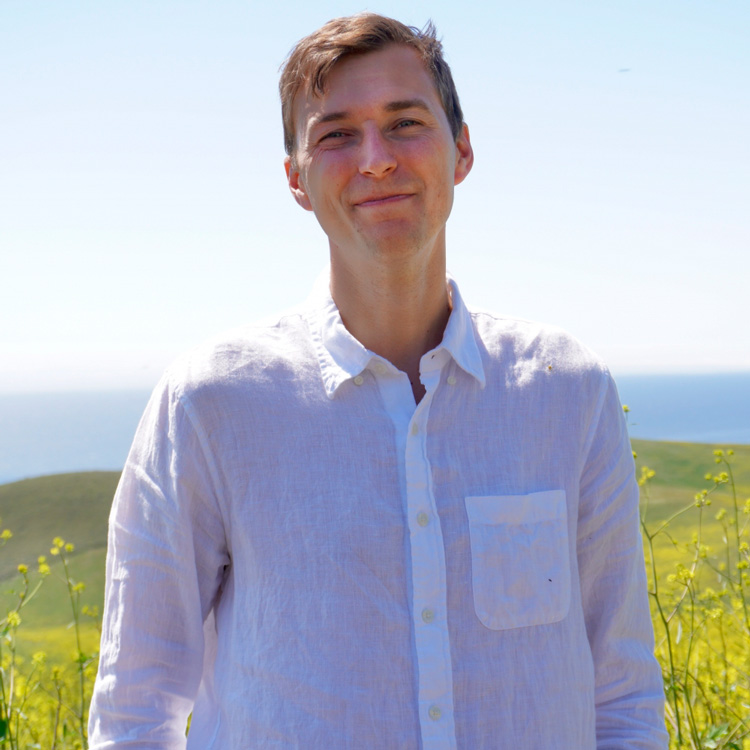 “These groundwater wells are used to withdraw water for household use or irrigation,” added Perrone, a faculty member in the Environmental Studies Program. “Our study is the first time that groundwater wells and water level observations have been stitched together like this, providing local insights at the global scale.”

Reaching these conclusions required the better part of six years’ work by Perrone and Jasechko. The researchers culled their data from more than 100 unique databases around the world, sometimes in different formats and languages.

The first step involved compiling roughly 39 million records of functional groundwater wells that included depth, purpose, location and construction date. Rather than delegate processing the data to an algorithm or AI, the researchers carefully went through tidying it up manually. “We wanted to be sure we understood the limitations and nuances for each database we analyzed,” Jasechko said.

With the data sorted, the authors compared the depths of local water tables against well depths. They found that 6 to 20% of the wells in their global sample were at risk of running dry if water levels continue to decline by just a few meters. They sought to find trends in the depths of new wells compared to existing wells in a given area from 1950 through 2015. While newer wells tended to be deeper than older ones, the trend was not ubiquitous, they said. Functional wells were not getting substantially deeper in many of the areas they surveyed.

The researchers then pulled data from roughly 1.1 million monitoring wells, which provide measurements of groundwater levels and conditions. These records supplied not only an account of where the water table lay, but also how much it fluctuated over the course of the year. Seasonal variation, they found, was typically within one meter.

By comparing depth trends to measurements from nearby monitoring wells, Perrone and Jasechko could also deduce how close functional wells were to drying out. They found that in many areas groundwater levels are declining, yet new wells are not being drilled deeper to keep pace with the falling water table. Since wells aren’t getting substantially deeper in many areas, newer wells are at least as vulnerable as older wells should groundwater levels continue to decline. 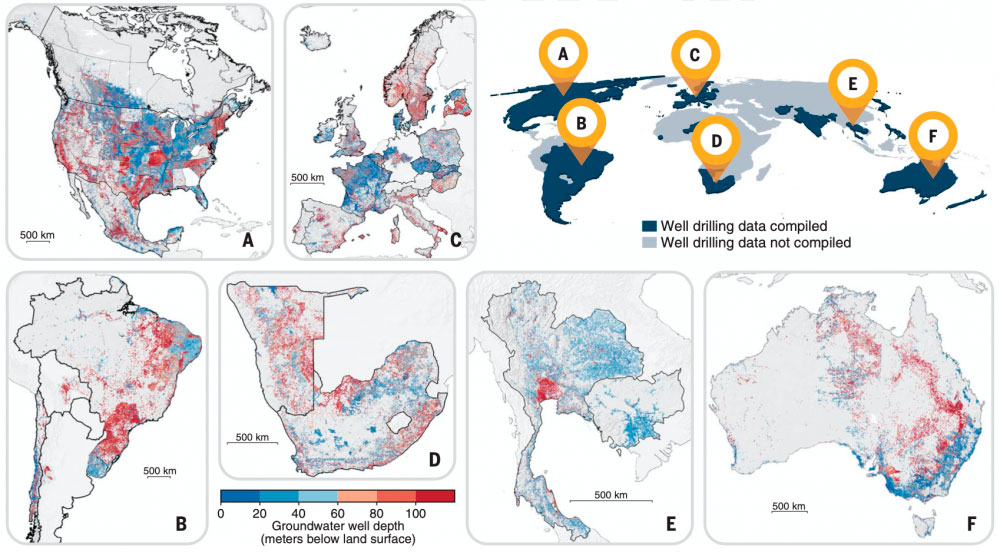 The two researchers also availed themselves of data from NASA’s GRACE mission. The pair of GRACE satellites detect small differences in the Earth’s gravitational field as they orbit the planet. This provided Perrone and Jasechko with information about groundwater reserves for regions where data from monitoring wells is limited.

“We only have groundwater level monitoring data for a few dozen countries,” Jasechko said, “but GRACE data allows us to explore changes in water storage around the globe.” While the resolution was coarse, the additional information confirmed the disconnect between declining groundwater and the construction of deeper wells.

There are many reasons not to drill deeper. It’s much more expensive in terms of drilling and operational costs. The quality of groundwater can also decrease at depth, often becoming more saline toward the bottom of an aquifer.

“Drilling wells is expensive,” Jasechko remarked. “Even if fresh water exists deep underground, not every individual or household has the capital to drill a new well to access it, which raises concerns about equity when wells run dry.”

The pair hope to expand the coverage of their dataset, especially to countries like China, Iran and Pakistan, three major users of groundwater that the researchers could not obtain records from. They also plan to investigate the extent of groundwater decline in future research, looking for information on how quickly water tables are dropping and where the trend is accelerating. 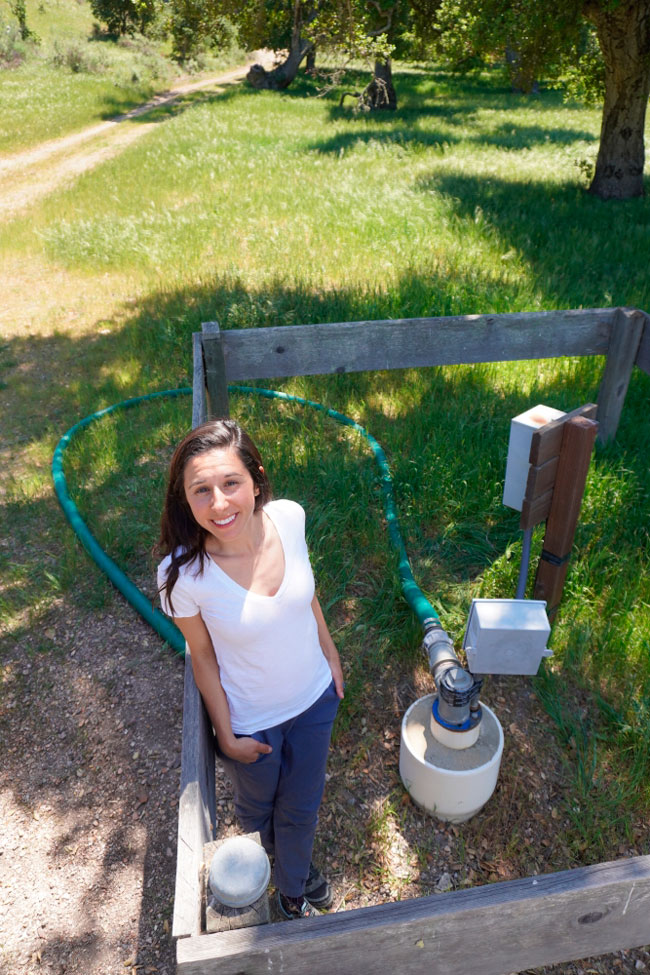 Perrone stands next to a groundwater well used to monitor natural conditions at the Jack and Laura Dangermond Preserve.

Perrone and Jasechko have made a name for themselves in the field of groundwater research by approaching the topic with enormous datasets like this one. The global study comes on the heels of another paper published in Nature on groundwater resources across the United States. There, they revealed the extent to which rivers across the country are losing flow to aquifers, in part due to pumping.

Together, the findings paint a broad picture not just of wells in danger, but of dwindling groundwater resources as a whole. While pumping may have the most direct impact on aquifers, the authors note, human activity has many indirect effects on groundwater quality and levels. Industrial activity, water diversion and even pavement and runoff affect the water beneath our feet. Climate change may exert the greatest influence over the long term, as it alters the distribution and intensity of precipitation and evapotranspiration from plants and soils worldwide.

“These findings highlight the importance of groundwater resources and groundwater management to the global community,” Perrone said. “Putting all the data together reveals that declining groundwater levels threaten wells in many places across the world.”

Groundwater sustainability is a complex issue with a lot of considerations and tradeoffs, the authors acknowledged. Deciding on a course of action won’t be easy, but compiling and analyzing large datasets like this are a critical first-step in tackling the challenge. “With these data, we can make more informed management decisions to help us use groundwater sustainably,” Perrone said.