Mining involves moving a lot of rock, so some mess is expected. However, mining operations can continue to affect ecosystems long after activity has ended. Heavy metals and corrosive substances leach into the environment, preventing wildlife and vegetation from returning to the area.

Fortunately, this damage can be reversed. A team of scientists, including UC Santa Barbara’s Dave Herbst, investigated how river ecosystems respond to remediation efforts. The team combined decades of data from four watersheds polluted by abandoned mines. It took creative thinking to simplify the complex dynamics of nearly a dozen toxins on the myriad species in each river.

Ultimately, the team’s clever methodology showed that restoration can improve some of the biggest problems of mining contamination. Their findings, published in the journal Freshwater Science(link is external), revealed strategies that worked well as recovery patterns across the four waterways. The results also suggest that regulations need to consider all contaminants together, rather than establish standards on an individual basis.

“There is a big problem that we have with legacy mine sites, not only in the U.S. but worldwide,” said Herbst, a research biologist at the university’s Sierra Nevada Aquatic Research Laboratory (SNARL) in Mammoth Lakes. “They are widespread, persistent and long-lasting problems. But the good news is that, with the investment and effort of programs like CERCLA Superfund, we can fix those problems.”

Herbst’s work focused on Leviathan Creek, a Sierran stream 25 miles southeast of Lake Tahoe which is the site of a restoration effort under CERCLA (the Comprehensive Environmental Response, Compensation, and Liability Act), also known also as Superfund. The area was mined not for precious metals, but to extract sulfur for making sulfuric acid to process minerals from other sites. The presence of sulfur-bearing minerals made for water that was naturally a bit acidic, but open-pit mining exposed these minerals to the elements. The result was stronger acid that leached trace metals like aluminum, cobalt and iron from the rock into the environment. The combined effects of increased acidity and toxic metals devastated the local aquatic ecosystem.

Each mining site produces a unique blend of pollutants. What’s more, different rivers harbor different species of aquatic invertebrate, with hundreds of different types in each stream, Herbst said. This variability made comparisons a challenge.

So the researchers set to work establishing standards and benchmarks. They decided to track the effect of pollution and remediation on mayflies, stoneflies and caddisflies. These groups are critical to the aquatic food web and display a variety of tolerances to different toxins. Rather than compare closely related species, the scientists grouped together animals with shared characteristics — like physical traits and life histories.

Next the team had to make sense of all the pollutants. They quickly realized it wouldn’t be enough to track the toxicity of individual metals separately, as is often done in the lab. It’s the combined impact that actually affects the ecosystem. Furthermore, scientists often measure toxicity based on a lethal dosage. And yet pollution can devastate ecology at much lower concentrations, Herbst explained. Chronic effects, like reduced growth and reproduction, can eliminate species from an area over time without actually killing any individuals.

Given the variety of toxins, the researchers decided on another standard for toxicity: the criterion unit. They defined 1 criterion unit (CU) as the concentration of a toxin that produced adverse effects on growth and reproduction of test organisms. Although the variety of responses makes the CU an approximation, it proved to be a surprisingly robust metric.

This approach enabled the scientists to compare and combine the effects of completely different toxins, providing a validation of how total toxicity would be expected to occur in nature

The concentration in 1 CU varies from substance to substance. For instance, the researchers used a value of 7.1 micrograms of cobalt per liter of water as a toxic threshold for aquatic life. So, 7.1 µg/L equals 1 CU of cobalt. Meanwhile, 150 µg/L of arsenic kept invertebrates from living their best lives, so 150 µg/L was set as 1 CU of arsenic.

This approach enabled the scientists to compare and combine the effects of completely different toxins, providing a validation of how total toxicity would be expected to occur in nature. So, 7.1 µg/L of cobalt by itself, or 150 µg/L of arsenic by itself, or even a combination of 3.55 µg/L of cobalt plus 75 µg/L of arsenic all produce a cumulative criteria unit (CCU) of 1, which spells similar problems for aquatic critters however it is reached.

This combined effect proved critical to understanding the real-world implications of mining pollution because animals are exposed to many toxins at once. “You need to consider these metals together, not individually, when evaluating the toxicity threshold in a field setting,” Herbst said.

So despite the variety of metals at different locations, by expressing toxicity in cumulative criteria units, the scientists could compare across rivers. When total toxicity tops 1 CCU, invertebrate diversity unravels.

The team now had their subjects (aquatic invertebrates) and a simple way to measure pollution (the cumulative criteria unit). They also had over 20 years of field data from four watersheds where Superfund clean-ups have been underway. They used unpolluted streams near each river as a baseline to judge how well restoration was proceeding.

The authors found these projects were able to restore rivers to near natural conditions in 10 to 15 years. It was a wonderful surprise. “Regardless of the fact that there were different mining pollutants, different ways of remediating the problem and different sizes of stream, all the projects came to successful outcomes,” Herbst said.

Much of the recovery happened in the first few years of treatment, he added. Since conditions are at their worst in the beginning, even a small effort will make a big difference.

“The other surprising part was the degree of commonality in the responses despite differing contaminants and remediation practices,” Herbst said. The rate of recovery, order in which species returned (based on shared traits), and even the long-term timeframe was similar across all four rivers. These promising results and shared paths suggest that even daunting environmental problems can be solved with proper effort and investment.

Remediation at the four sites in California, Colorado, Idaho and Montana is ongoing. Many interventions, like treating acidic water with lime, require continuous attention. However, efforts like replacing contaminated soil, setting up microbial bioreactors and revegetating excavated and riparian areas will hopefully make remediation self-sustaining.

And a self-sustaining solution is the goal, because these sites can become inaccessible at certain times of year, leading to variable levels of pollution. For instance, snow prevents access to the Leviathan mine in winter, so remediation can occur only between spring and fall. The spring snowmelt also dissolves more metals, creating worse conditions than during drier times at the beginning of autumn.

Herbst plans to revisit the seasonal aspects of remediation in future research. As for now, he thinks that other abandoned mines should implement remediation and monitoring practices to evaluate the success of restoration.

Remediation at the four sites in California, Colorado, Idaho and Montana is ongoing

These exciting discoveries would have been impossible without long-term monitoring at the four locations. “You seldom get monitoring studies of restoration projects that last more than a couple of years,” Herbst said, “which is really a shame because most of them don’t show any kind of response over that short a period of time.”

And the only reason Herbst and his colleagues had these datasets was because they invested the time and resources themselves. “A lot of it is due to the dedication of individual researchers to these projects,” he said. “There are other players that come and go along the way, but as long as there’s some dedicated researcher collecting this data then it will be there in the future for us to base decisions on.”

Aside from the importance of long-term monitoring, the message Herbst hopes the EPA and industry embrace is that we can’t apply water quality standards for toxic metals individually. “We must be applying them collectively according to how they’re acting together,” he said.

Even if individual contaminants are under the required limits, their combined effect could be well over what wildlife can handle. The concept of cumulative criteria units provides a really simple way to account for this: If eight toxins in a stream are all at half of their CU value, they still add up to 4 CCUs.

Bottom line: There is reason to celebrate. “We’re able to demonstrate through this research that these programs can be successful even for the biggest of problems,” Herbst said, “which is exactly what Superfund projects are intended to fix.” 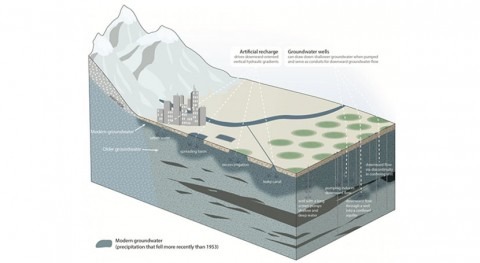