Not a school, not a home, not a woman without proper sanitation

We Are Water Foundation
We are a non-profit organisation, set up in 2010 with the aim of contributing to the resolution of problems derived from the lack of water and sanitation in the world.
TwitterFacebookYoutubeWeb
· 47
1 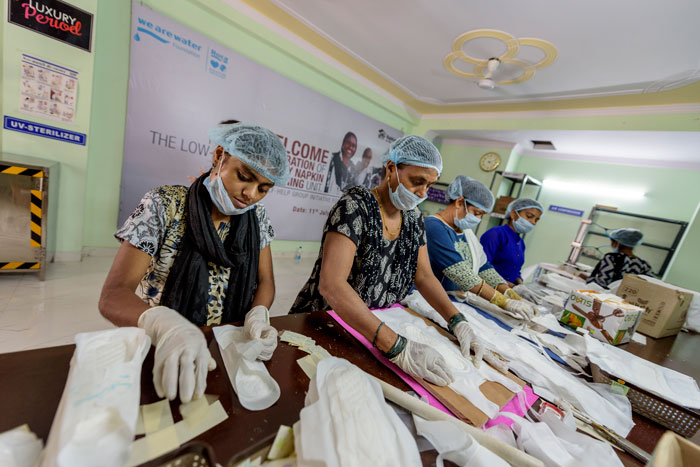 ©Carlos Garriga/ We Are Water Foundation

Women in Haiderpur, in the Indian state of Haryana, have an opportunity for empowerment with respect to one of the great taboos that still plague the rural Indian community: menstruation. Providing them with the opportunity to make their own sanitary towels from materials within their reach and be able to market them is one of the objectives of the project developed by the We Are Water Foundation in collaboration with Habitat for Humanity India.

This is not a minor goal, as millions of women in India have never known clean water, toilets or intimate hygiene. On the other hand, the exclusion some of these women experience when they have their period is deeply rooted in many areas of the country, causing women not to talk about it and leading to a lack of information at a physiological and hygienic level.

The situation worsens for girls as only half of Indian schools have gender-separated toilets, so the shame caused by menstruation is added to the lack of privacy to wash. This is one of the reasons why 113 million girls drop out of school at puberty, mostly in poorer areas and lower castes, where adolescence often coincides with the need to take care of the family, fetch water and do household chores. 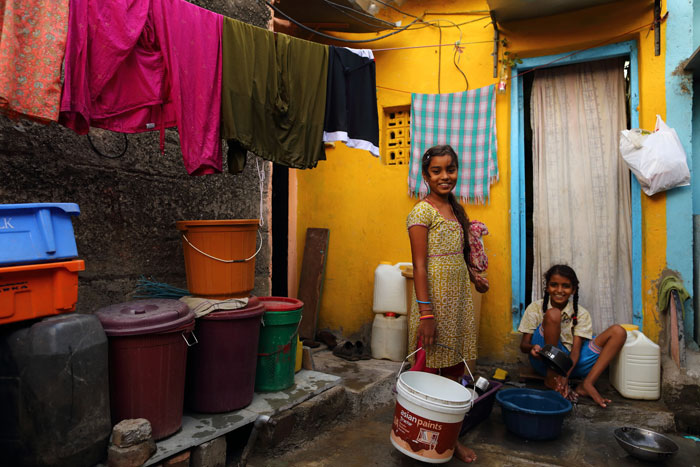 The menstrual hygiene problem worsens due to the fact that sanitary towels are an unaffordable luxury for these women: only 12% of Indian women use sanitary towels due to their high price and their use is practically nonexistent in lower castes. In these cases they usually resort to unhygienic and unhealthy measures to contain their losses: wood shavings, hay, newsprint, etc. In some cases they use old rags, cloths that are not washed periodically, for shame of showing the results of the menstruation when they are doing their laundry, or they are washed with polluted water, so that this garment becomes a new element of the transmission of diseases.

The taboos and the lack of education result in most women in rural areas not washing their vaginas properly. Others wash it with leaves or pieces of paper, or with polluted water. Diseases, such as vaginal infections or sexually transmitted diseases have a high incidence in rural India.

This project is designed to promote not only menstrual hygiene, but also to provide economic empowerment to women through business opportunities, such as the production of sanitary pads and the promotion of the proper management of menstrual hygiene.

Through this program, a group of at least 10-15 women is being trained to create self-help groups to learn how to make low-cost sanitary pads made from cotton waste and other raw materials in different parts of Delhi.

The scope of the project reaches around 50,000 women in slum areas of the New Delhi region, educating and raising awareness among them of sanitation and hygiene. In this way, women talk about how to manage their menstrual hygiene and thus break taboos in their families and in their social environment by overcoming their shame. They also have access to information to understand the physiology of the menstrual cycle and to disposable sanitary cloths or towels in facilities for recycling.

Support for the Swachh Bharat program 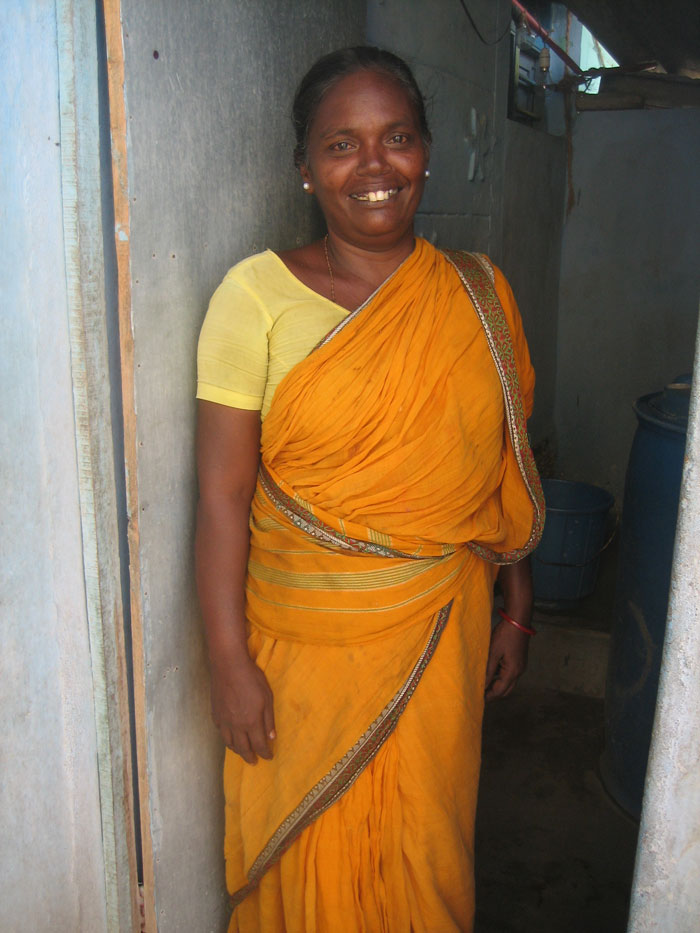 On World Toilet Day, the We Are Water Foundation culminated another of its most significant projects in India by handing over the keys to 200 individual household latrines, known in India by their acronym IHHL (Individual House Hold Latrine), to the 200 beneficiary families in the town of Bhiwadi in the state of Rajasthan. The project, carried out in collaboration with Habitat for Humanity India was based on the construction of 200 toilets to prevent open defecation due to the scarcity of financial resources and the capacity and lack of knowledge of healthy practices. The Foundation provided technical assistance, and created work groups to train, educate and monitor the activities. The project is based on the program Swachh Bharat (Clean India) and was carried out in close cooperation with the local government.

Also in the state of Rajasthan, on World Toilet Day, the Foundation announced another project in collaboration with the Gramya Foundation. This is the launch of the school sanitation unit built by the Foundation in Rewari, also in Rajasthan, which will benefit more than 2,000 schoolchildren. The Foundation is fully engaged in supporting adequate sanitation in schools, another major challenge in India whose focus can be seen in the project of school sanitation facilities for girls in Alwar, Chennai, Ranipet and Vellore, in collaboration with World Vision India which will benefit more than 1,500 schoolchildren.

In this project it is clear that building toilets in schools is relatively easy, but making them functional and usable always requires a change in the mentality and behavior of schoolchildren, and the commitment of school teachers.

A huge challenge that is being met step by step 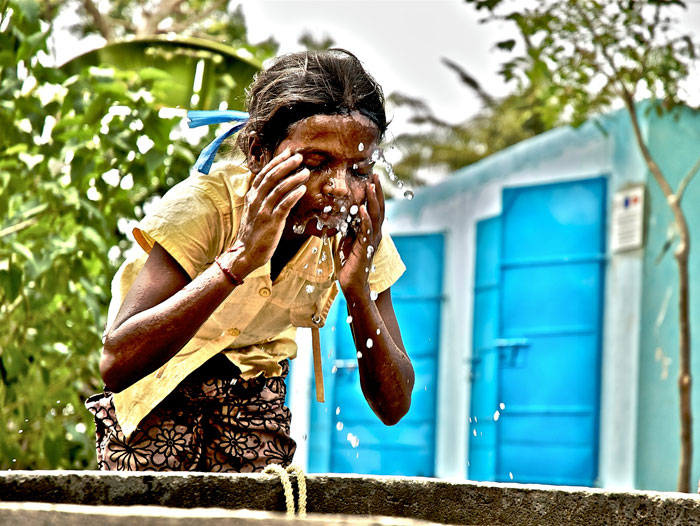 “Sanitation is more important than independence”, this was said by Mahatma Gandhi at the dawn of the creation of the greatest democracy on Earth. More than 70 years later, access to sanitation, despite visible progress, remains India's most important challenge, perhaps the country with the world's greatest growth potential, but one that must succeed in eradicating this scourge that hampers its economic and social progress and affects the sustainability of life on Earth.

It is the goal of the Swachh Bharat program: to end open defecation by 2019 and for every household and community to have efficient and dignified toilets and washbasins. The year coincides with the 150th anniversary of Gandhi's birth and the prospects for doing so are encouraging. This is what UN Secretary General António Guterres said last October in New Delhi in front of the more than 50 leaders of countries fighting for the achievement of decent sanitation gathered at the Mahatma Gandhi International Sanitation Convention. Guterres welcomed the advance of Swachh Bharat promoted by the government of Narendra Modi: “The example of India is very welcome because it is of vital importance to the rest of the planet.”