Yesterday We are Water Foundation, in collaboration with Roca Lisboa Gallery and Give a Shit Project, organised the webinar “Valuing toilets beyond visible”, part of global efforts to raise awareness of global sanitation issues on the occasion of #WorldToiletDay, celebrated on November 19. The audience heard from experts that presented on-the-ground case studies from different countries, where solutions have been implemented to provide answers to local sanitation problems.

The virtual event was moderated by Laura Korčulanin, founder of the international project Give a Shit and researcher at IADE-EU. She introduced the three invited speakers and explained how the webinar would unfold. "Sanitation and safe drinking water are basic human rights", she started. Even though defecation is one of the fundamental parts of our life, no matter where we are from, she noted, sanitation and toilets are still overlooked because it is awkward to speak about them. 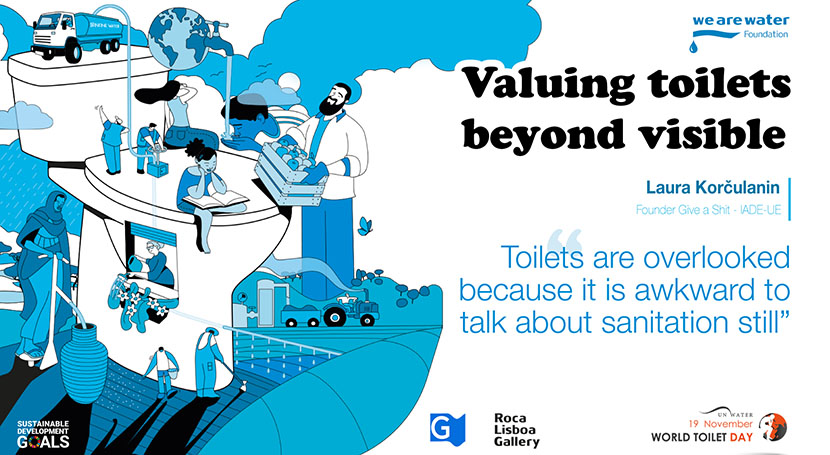 Laura mentioned we need a “new paradigm for toilets”, and raised the question of why we are not innovating enough in sanitation, and being more inclusive. It is something essential, as “every day, over 700 children under five years old die of diarrhea.” Next, she introduced three experts on the topic of sanitation from different areas, to start discussions on what can be done and how it can be done.

Sanitation and safe drinking water are basic human rights - Laura Korčulanin, founder of the international project Give a Shit

The first guest speaker was Carlos Garriga, director of the We Are Water Foundation. The We Are Water Foundation was launched 11 years ago by the Roca company. “About 3 billion people worldwide lack adequate facilities to safely wash their hands at home", he pointed out, and he presented some highlights of projects the Foundation is involved in, in different countries, including Madagascar, Morocco, and Burkina Faso. "In terms of projects, we work in three different areas: reservoirs, infrastructure and education", he explained. 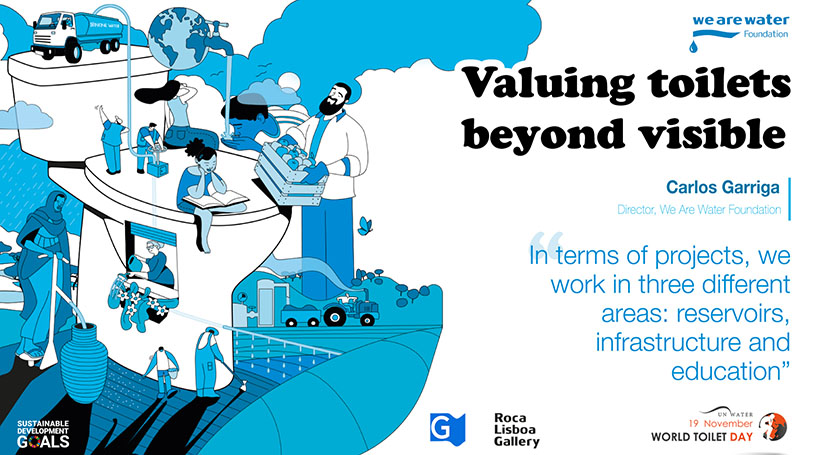 Concerning education, he said that half of the schools in developing countries do not have spaces for children to wash their hands. Since the pandemic started, the lack of handwashing facilities has been an even greater source of concern: “The lack of hygiene is essential to stop the spread of the Coronavirus. Without water, washing our hands is impossible.” Carlos Garriga explained the foundation has been working with UNICEF and the government of Burkina Faso to deal with open defecation, including the provision of water and sanitation facilities in schools, promoting hygiene and preventing COVID transmission with anti-COVID kits.

About 3 billion people worldwide lack adequate facilities to safely wash their hands at home - Carlos Garriga, director of the We Are Water Foundation

The next speaker was Mona Mijthab, a social entrepreneur and founder of Mosan Sanitation Solutions, which work to improve the living conditions of communities by providing access to sanitation services. She presented her solution, the Mosan idea, which was inspired by looking at people’s living conditions: “We are all together in this. It all affects us and this is why it is important to tackle the sanitation crisis together”. Mona said they are adapting the Mosan solution, an attractive, off grid solution that puts people first, to the local context in Guatemala.

The Mosan system is based on a circular regenerative system. It can work without water and without chemicals, it is based on containers. The community in Guatemala where they are working does not have roads, so they use manual transportation for waste. The system uses pyrolysis to dry the faecal matter and in a second step the materials are moved into a reactor where propane is used to heat the materials to 300-400 degrees Celsius; the materials carbonize, and they are sterile and safe for reuse. They have partnered with the Ministry of Agriculture of Guatemala to scale the technology, for national roll-out. A key challenge is finding a way to make the project financially sustainable; one possible way is families would pay a small fee per month. 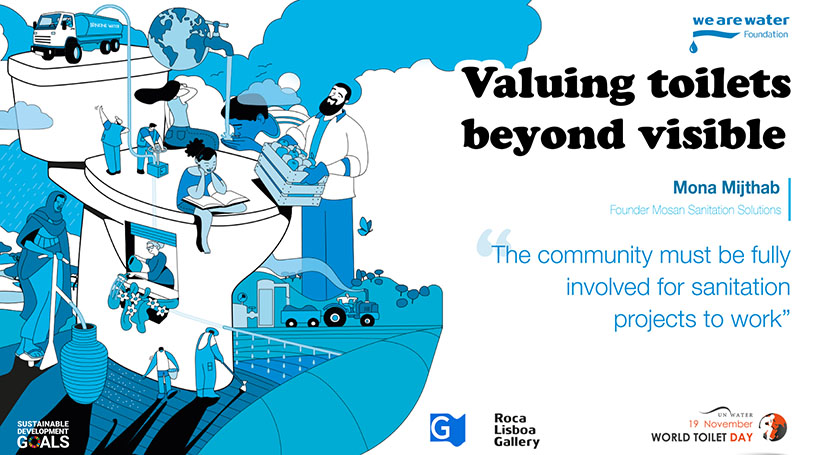 The benefits of the solution are many: “we can actually make sanitation climate positive”, said Mona, noting that biochar fertilizer development is very important, as it allows bringing the nutrients back to agriculture, where they are useful. She emphasized that “the community must be fully involved for sanitation projects to work”, and so they intend to create community led services, where the community has full ownership and power over the solution in the long term.

The community must be fully involved for sanitation projects to work - Mona Mijthab,  founder of Mosan Sanitation Solutions

The third and final guest speaker was Dr Graham Alabaster, Head of the UN-Habitat office in Geneva, who discussed sanitation issues in urban slums, where “it is very difficult to physically provide services”. He underlined that providing water and sanitation services “is about understanding the community and providing services that fit in with their customs”. As an example, he presented a case study where they used water and sanitation as an entry point to upgrade slums in Nairobi. Looking at how they could work with the community to upgrade slums, they learned that the community was interested in having a road into the slum, as well as communal facilities, because of space issues. 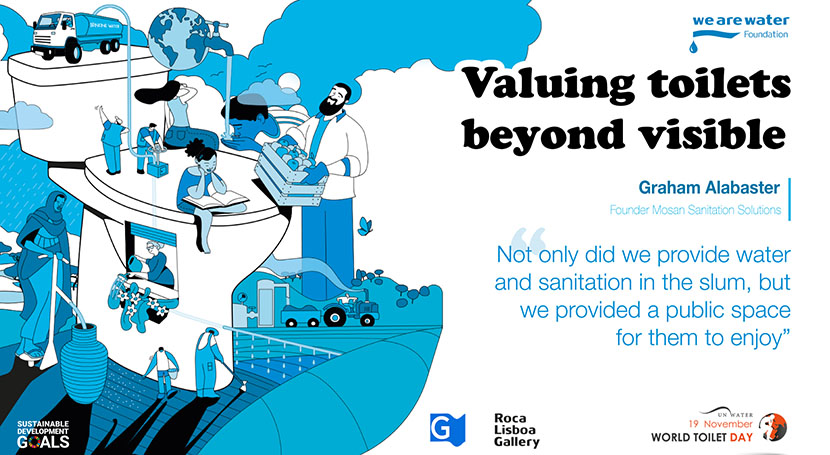 The moderator thanked the three speakers for presenting their unique projects and experiences. She remarked the new paradigm for sanitation has to do with working with communities, and ecological sanitation. Laura then opened a question period, and asked the speakers about the way forward: how to achieve a systemic change beyond toilets, innovate faster, empowering communities, while also furthering developments in ecological sanitation. Talking about the involvement of governments, Carlos Garriga noted that is impossible to find a solution without governments, and Dr Graham Alabaster highlighted the importance of finding champions within local government, at the city level.

Some key messages were that working on education, raising awareness, and engaging with the community, are key in the way forward. The challenges mentioned by practitioners working on projects on the ground may not be widely known, so hearing about the case studies presented in this webinar highlighted the need for more discussion: on what is possible, on what can be done in terms of collaboration between different actors, and how we can be creative to tackle sanitation issues across the world. Happy World Toilet Day!