When life is measured in drops

General3
We Are Water Foundation
We are a non-profit organisation, set up in 2010 with the aim of contributing to the resolution of problems derived from the lack of water and sanitation in the world.
TwitterFacebookYoutubeWeb
· 24
1

A water drop lost in the irrigation process is a treasure lost in the soil. The farmers with an increasingly menaced future due to drought cannot stand still while the little water they have left evaporates: without it they are bound to extreme poverty. The drip irrigation systems avoid the evaporation of water and the misery of those who lose it. For all of them each drop is the treasure of a lifetime. 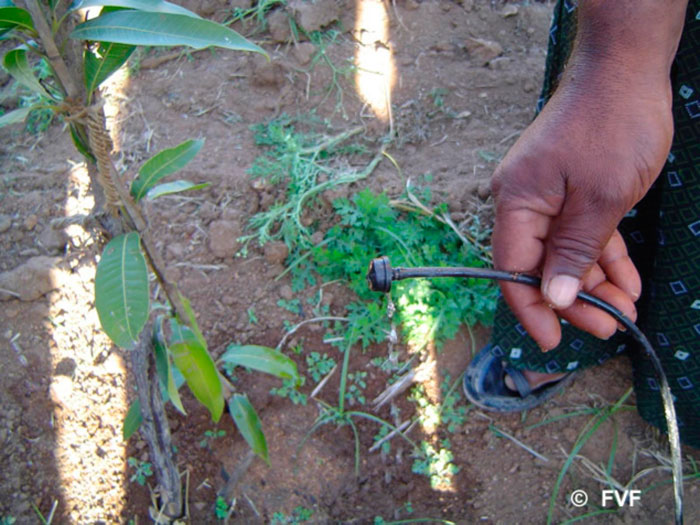 "Before having the drip irrigation system, I used to provide water for my crops manually. Nowadays I have 228 fruit trees and peanut plants. We still have to wait two more years to obtain any yield from the mango plants, right now the peanut is the source of our income.”  These were the words of Ganganna, a farmer from the village of P. Kothakota in 2012, after finishing the installation of the drip irrigation system in his land, one of the goals of the project carried out by the We Are Water Foundation in collaboration with the RDT in India.As most of the farmers in the area, Ganganna was destined to the peanut monoculture, and the possibility of growing mangos and vegetables has been the first step to attain self-sufficiency.

These installations have also benefitted the family of Upendrachari, a farmer of the village of Venkatagaripalyam. For years he has had to walk 450 metres every day to transport the water he collected from a well, in order to irrigate his land: “It is very difficult to do this in summer due to the lack of power supply. My daughter had to struggle to water it and we lost plenty of water. Now these problems have been solved as we only need to start the drip irrigation system.”

Both Gangana and Upendrachari were menaced by the extreme poverty caused by rising droughts, which have led many of their neighbours to migrate to the slums of the cities in India. In a climate situation of increasingly devastating droughts, mainly in the centre and south regions of India, the Anantapur district, in the state of Andhra Pradesh, is one of the areas which has been most affected by the agricultural impoverishment. 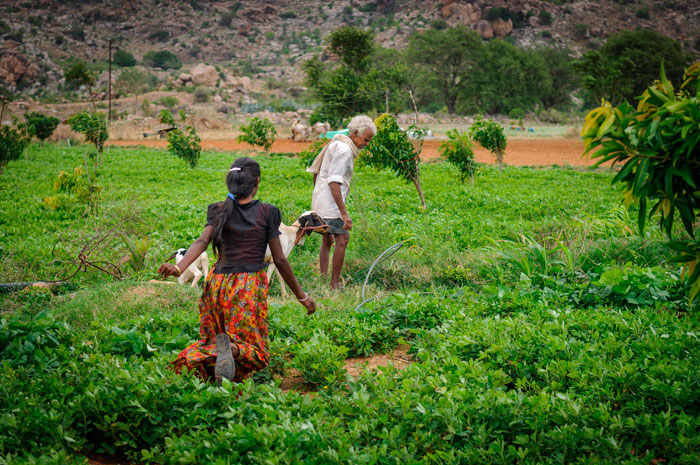 This is one of the greatest menaces to the socioeconomic growth of India, the second most populated country on Earth with over 300 million inhabitants making a living from agriculture. The losses due to water evaporation in the arable lands are very high, mainly in those regions with high temperatures such as Anantapur, which is the second driest area in India after the Thar Desert.

The drip irrigation system is a method consisting of taking water to the plant by means of small pipes and applying it drop by drop close to the root. This system reduces the loss of water due to filtration or evaporation and ensures a much more efficient use of fertilizers: instead of placing them on the ground near the plant, they are mixed with water and supplied on the rootwith each drop, achieving far better results in the quality of crops.

The implementation of drip irrigation systems allows the farmers in Anantapur to save up to 75% of water, an improvement in their development prospects which is the first step to overcome poverty. Compared to sprinkling or manual irrigation systems, the drip irrigation system notably improves the survival of plants that grow regularly and are much less vulnerable to plagues; as explained by Ganganna: "In 2010 the RDT provided me with 300 mango plants, but I lost 72 plants due to a plague. Now my family and I are happy with the drip irrigation system; we use less water and our plants grow in a uniform manner and are healthy.”

The drops injected by small pipes into the bowels of the modest land of the families of Gangana and Upendrachari allow them to prosper and visualize a climate-resilient future while staying in their own land.

Crisis & Change, are we ready for an industry transformation?
END_OF_DOCUMENT_TOKEN_TO_BE_REPLACED