Over the past 50 years, more than 11,000 disasters have been attributed to weather, climate and water-related hazards, involving 2 million deaths and US$ 3.6 trillion in economic losses. While the average number of deaths recorded for each disaster has fallen by a third during this period, the number of recorded disasters has increased five times and the economic losses have increased by a factor of seven, according to a new multi-agency report.

Extreme weather and climate events have increased in frequency, intensity and severity as result of climate change and hit vulnerable communities disproportionately hard.  Yet one in three people are still not adequately covered by early warning systems, according to the 2020 State of Climate Services report released on the International Day for Disaster Risk Reduction on 13 October.

In 2018, globally, around 108 million people required help from the international humanitarian system as a result of storms, floods, droughts and wildfires. By 2030, it is estimated that this number could increase by almost 50% at a cost of around US$ 20 billion a year, it says.

The report, produced by 16 international agencies and financing institutions, identifies where and how governments can invest in effective early warning systems that strengthen countries’ resilience to multiple weather, climate and water-related hazards and provides successful examples.

“Early warning systems (EWS) constitute a prerequisite for effective disaster risk reduction and climate change adaptation. Being prepared and able to react at the right time, in the right place, can save many lives and protect the livelihoods of communities everywhere,” said World Meteorological Organization (WMO) Secretary-General Professor Petteri Taalas.

“While COVID-19 generated a large international health and economic crisis from which it will take years to recover, it is crucial to remember that climate change will continue to pose an on-going and increasing threat to human lives, ecosystems, economies and societies for centuries to come,“ he said.

“Recovery from the COVID-19 pandemic is an opportunity to move forward along a more sustainable path towards resilience and adaptation in the light of anthropogenic climate change,” Professor Taalas said in a foreword to the report.

The 2020 State of Climate Services report provides a basis for understanding how to strengthen protection for the most vulnerable, including through mechanisms such as the Climate Risk and Early Warning Systems (CREWS) initiative, which together with l’Agence Francaise de Développement, provided funding for the report. 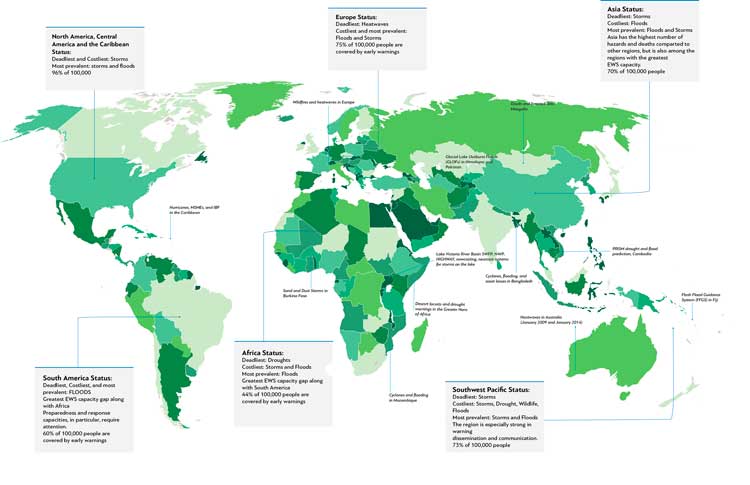 Nearly 90 percent of Least Developed Countries and Small Island Developing States have identified early warning systems as a top priority in their Nationally Determined Contributions on climate change. However, many of them lack the necessary capacity and financial investment is not always flowing into the areas where investment is most needed.

Data provided by 138 WMO Members shows that just 40% of them have Multi-Hazard Early Warning Systems (MHEWS). This means that globally on average one in three people is still not covered by early warnings. Currently, only 75 WMO Members (39%) indicated that they provide impact-based forecasting services.

Dissemination of warnings is weak in many developing countries, and advances in communication technologies are not being fully exploited to reach out to people at risk, especially in LDCs.

There is insufficient capacity worldwide to translate early warning into early action – especially in LDCs. Africa faces the largest gaps in capacity. Across this vast continent, while capacity is good in terms of risk knowledge and forecasting, just 44,000 of people in 100,000 are covered by early warnings, in countries where data is available.

All weather and climate services rely on data from systematic observations. However, observing networks are often inadequate, particularly across Africa where, in 2019, just 26% of stations met WMO reporting requirements. 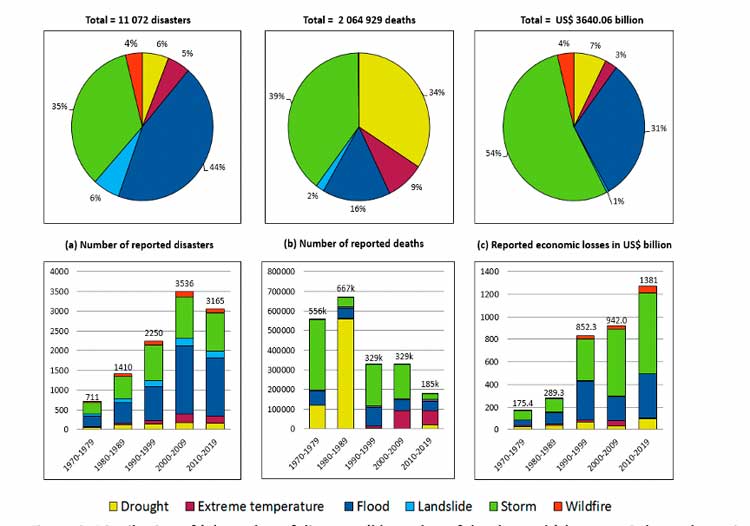 An increase in climate-related disasters indicates that upscaling of adaptation investment across the board is required, including specifically in reducing weather-water and climate-related risks through investments in improving access to risk information and multi-hazard early warning systems enhancement.

The good news is that climate finance has reached record levels, crossing the US$ half-trillion mark for the first time in 2017-18. Action still falls far short of what is needed under a 1.5˚C scenario, however. Estimates include that US$ 180 billion will be needed annually for the period 2020-2030, as suggested by the Global Commission on Adaptation.

And despite annual tracked climate finance reaching the half-trillion-dollar mark for the first time in 2018, adaptation finance is only a very small fraction (5%) and financing for risk information and early warning systems is only a fraction of that.