A weak La Niña event may re-emerge later in 2021 for the second consecutive year, with the risk that forecast precipitation patterns may exacerbate existing drought in some parts of the world and increase the risk of heavy rainfall and flooding in others. But despite La Niña’s cooling influence, temperatures over land areas are expected to be above average between September and November, especially in the northern hemisphere, according to the World Meteorological Organization.

La Niña refers to the large-scale cooling of the ocean surface temperatures in the central and eastern equatorial Pacific Ocean, coupled with changes in the tropical atmospheric circulation, namely winds, pressure and rainfall. It usually has the opposite impacts on weather and climate as El Niño, which is the warm phase of the so-called El Niño Southern Oscillation (ENSO).

“Human induced climate change amplifies the impacts of naturally occurring events like La Niña and is increasingly influencing our weather patterns, in particular through more intense heat and drought – and the associated risk of wildfires – as well as record-breaking deluges of rainfall and flooding,” said WMO Secretary-General Prof. Petteri Taalas.

“We have seen this with devastating and tragic effect in the past few months in nearly all regions of the world. Climate change is increasing the severity and frequency of disasters,” he said.

“Improved early warnings and disaster risk management means that we are better at saving lives, but the socio-economic and humanitarian impacts are spiralling in the form of worsening food insecurity, more displacement and migration and the potential for unrest,” said Prof. Taalas. 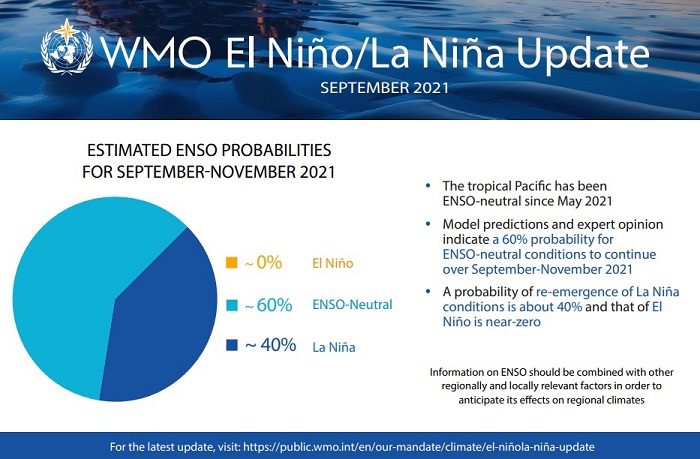 Prof. Taalas addressed a UN High-Level Humanitarian Event on Anticipatory Action on 9 September. The event is intended to galvanise a collective push to act ahead of weather and climate crises rather than responding when it is too late. Anticipatory Action schemes have pioneered the establishment of pre-arranged disaster financing mechanisms, which are triggered based on weather and climate forecast information.

This high-level event – to be opened by the United Nations Secretary-General – will showcase compelling examples of this anticipatory approach and generate signals of support to scale action. Leaders from Governments, international financial institutions, the United Nations and civil society will come together to demonstrate that the world is committed to act ahead of predictable crises.

WMO is stepping up its capacity to provide tailored support to the humanitarian sector. This includes offering support to facilitate access the most appropriate data, services and expertise from the WMO community to improve the development, design and operation of weather and climate forecast triggers.

Improved seasonal forecasts are pivotal in this because they help plan ahead and gain substantial socio-economic benefits in climate sensitive sectors like agriculture, food security, health and disaster risk reduction. A network of regional climate outlook forums now spans the globe, providing actionable climate information, for the forthcoming season, leveraging on inputs from global and regional producing centres and National Meteorological and Hydrological Services.

El Niño and La Niña are major – but not the only - drivers of the Earth’s climate system.

In addition to the long-established ENSO Update, WMO now also issues regular Global Seasonal Climate Updates (GSCU), which incorporate influences of all other major climate drivers such as the North Atlantic Oscillation, the Arctic Oscillation and the Indian Ocean Dipole.

The Global Seasonal Climate Update is based on forecasts from WMO Global Producing Centres of Long-Range Forecasts and is available to support governments, the United Nations, decision-makers and stakeholders in climate sensitive sectors to mobilize preparations and protect lives and livelihoods. 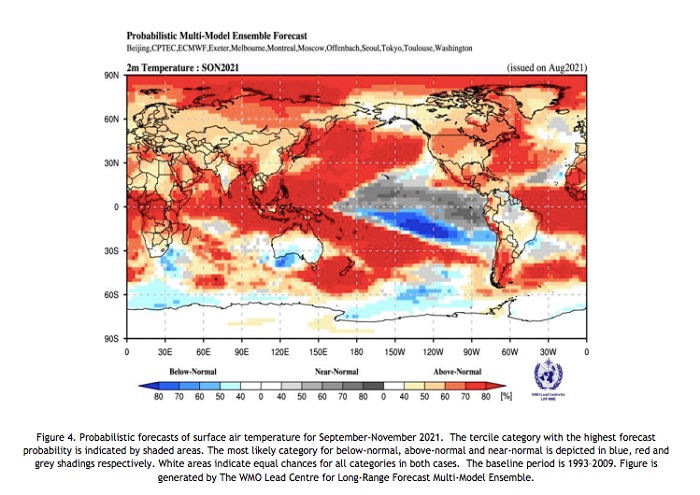 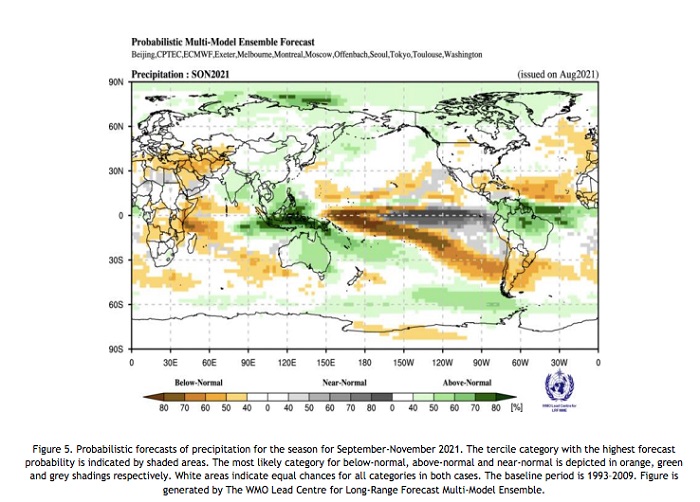 Regions with weakly increased probability for above-normal rainfall include the Indian subcontinent, Australia, eastern and southeast Asia. While enhanced probability for above-normal is predicted for extreme northern parts of Asia, South America north of 15°S, and from equatorial parts of the Indonesian Archipelago into the Southwest Pacific and up to an area northeast of New Zealand.

There are increased chances of unusually dry conditions near and west of the dateline, in parts of the South Pacific and unusually wet conditions to the west and south-west Pacific. Over the Caribbean there is a moderate to strong indication of below-normal rainfall, and an east-west band of above-normal rainfall immediately to the south and just to the north of the equator.

Regional perspective from monitoring and outlook

Observations of rainfall over the past months indicate that drier conditions dominate in many parts of central and southern East Africa and this situation is forecasted to continue until December 2021, according to the IGAD Climate Prediction and Adaptation Centre (ICPAC).  In particular, in Tanzania, Burundi, Rwanda, Kenya, southern, central, and north-western Somalia, southern and south-eastern Ethiopia, and the Red Sea coast of northern Eritrea.