As the planet warms, glaciers are retreating and causing changes in the world’s mountain water systems. For the first time, scientists at the University of Oxford and the University of Washington have directly linked human-induced climate change to the risk of flooding from a glacial lake known as one of the world’s greatest flood risks.

The study examined the case of Lake Palcacocha in the Peruvian Andes, which could cause flooding with devastating consequences for 120,000 residents in the city of Huaraz. The paper, published Feb. 4 in Nature Geoscience, provides new evidence for an ongoing legal case that hinges on the link between greenhouse gas emissions and particular climate change impacts.

“The scientific challenge was to provide the clearest and cleanest assessment of the physical linkages between climate change and the changing flood hazard,” said co-author Gerard Roe, a UW professor of Earth and space sciences.

In 2016, Roe and colleagues developed a method to determine whether an individual glacier’s retreat can be linked to human-induced climate change. The retreat of mountain glaciers has several consequences, including creating basins in the space left by the retreating glacier. Precipitation and meltwater collects in these basins to form glacial lakes. Recent work has shown a rapid worldwide growth in the number and size of high-elevation glacial lakes.

“We believe our study is the first to assess the full set of linkages between anthropogenic climate change and the changing glacial lake outburst flood hazard,” Roe said. “The methods used in our study can certainly be applied to other glacial lakes around the world.”

It finds that human activity is responsible for 95% of the observed 1 degree Celsius (1.8 degrees Fahrenheit) warming in this region since 1880

The new study first calculated the role of human emissions in the observed temperature increase since the start of the industrial era around Palcaraju Glacier. It finds that human activity is responsible for 95% of the observed 1 degree Celsius (1.8 degrees Fahrenheit) warming in this region since 1880. 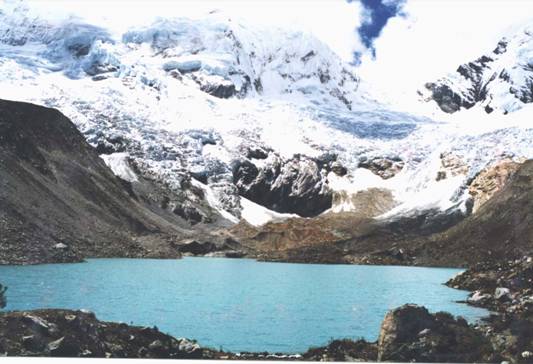 Lake Palcacocha last burst its banks in 1941, killing at least 1,800 people in the city of Huaraz. Known as one of the world’s most dangerous lakes, its water level has risen in recent years with the shrinking of Palcaraju Glacier, which lies directly to the north.Georg Kaser/Wikimedia

The authors then used the UW-developed technique to assess the relationship between these warming temperatures and the observed long-term retreat of the glacier that has caused Lake Palcacocha to expand. Results show it is virtually certain, with greater than 99% probability, that human-induced climate change has caused Palcaraju Glacier’s retreat.

Lead author Rupert Stuart-Smith, a doctoral student at Oxford, then used two methods to assess the hazard of glacial lake outburst flooding, in which an avalanche, landslide or rockfall induces a tsunami wave that overtops the lake’s banks, to pinpoint how Lake Palcacocha’s growth affects the flood risk faced by the city of Huaraz below.

Historical photographs (first three panels) and satellite images show how Lake Palcacocha has grown as the glacier has receded. The lake is now about 34 times its volume in 1970.Stuart-Smith et al./Nature Geoscience

“We found that human influence on climate — through greenhouse-gas emissions — is responsible for virtually all of the warming that has been observed in the region,” said Stuart-Smith, who spent the summer of 2019 at the UW. “The study shows that warming has caused the retreat of the Palcaraju Glacier, which in turn has greatly increased the flood risk.”

The study provides new evidence for an ongoing case in the German courts in which Saúl Luciano Lliuya, a farmer from Huaraz, has sued RWE, Germany’s largest electricity producer, for its role in creating global warming. The suit seeks reimbursement for current and future flood-risk reduction measures.

“Crucially, our findings establish a direct link between emissions and the need to implement protective measures now, as well as any damages caused by flooding in the future,” Stuart-Smith said.

This is not the first time Huaraz has been threatened by climate change. In 1941, an outburst flood from Lake Palcacocha, resulting from an ice and rock slide, killed at least 1,800 people. The study also found this flood to be influenced by human-induced climate change — making it one of the earliest identified fatal impacts of climate change.

The lake’s recent growth strains decades of engineering efforts since the 1970s to contain the lake’s water.

“Around the world, the retreat of mountain glaciers is one of the clearest indicators of climate change,” Roe said. “Outburst floods threaten communities in many mountainous regions, but this risk is particularly severe in Huaraz, as well as elsewhere in the Andes and in countries like Nepal and Bhutan, where vulnerable populations live in the path of the potential floodwaters.”