General92
WWF
The world’s leading conservation organization, WWF works in 100 countries and is supported by more than one million members in the United States and close to five million globally.
TwitterFacebookYoutubeWeb

It is official. Everything is on track for the establishment of the Three-Rivers-Source National Park (TRSNP) in China, which – as its name suggests – protects the source of three of Asia’s greatest rivers: the Yangtze, Yellow and Lancang-Mekong rivers.

Located in Qinghai province, the park will open at the end of 2020 after years of planning and preparation. WWF-China has been deeply involved in helping to protect this critical water source area for many years, dating back to a climate vulnerability assessment in 2008 and the High Altitude Wetland (HAW) project in 2015, as well as supporting the creation of the National Park.

Over the years, WWF’s work has in this area has reflected people’s changing understanding of high altitude wetlands and river systems, evolving from on site wetland management, to basin level impact, and eventually to a comprehensively managed national park.

While people have long been aware of the importance of protecting the sources of these hugely important rivers, WWF-China played a key role in demonstrating how best to conserve and manage the high altitude wetlands in what was then Longbao Nature Reserve in Qinghai Province. Supported largely by WWF-Netherlands, the project implemented many effective management methods in Longbao, including building the capacity of nature reserve staff, recruiting villagers as rangers, using more interactive communication channels with communities – all of which contributed to a number of successes, such as an increase in the breeding population of the iconic Black-necked crane. 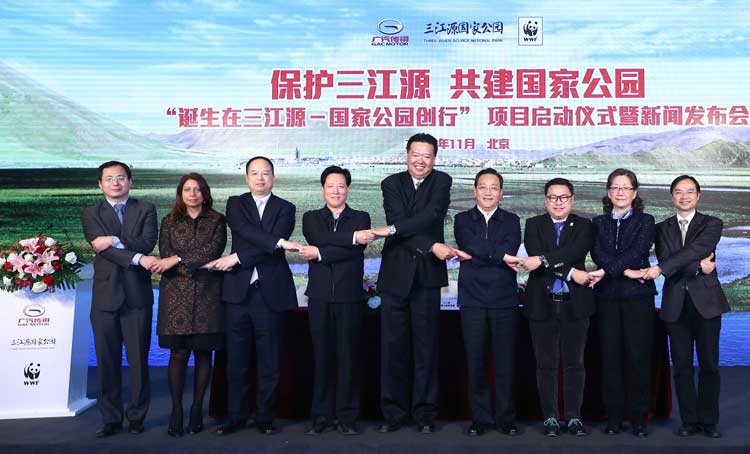 Following this pilot project, the provincial government adopted many of the practices and incorporated them into provincial legislation and policies, including government subsidies for villagers as rangers. These policies ensured long-term effective management in Qinghai, which includes the most populated areas of the Three-River-Source National Park.

WWF expanded its work in the area as part of its freshwater partnerships with HSBC and Coke, including it into broader efforts to enhance the health of the whole Yangtze Basin. The annual Wetland Ambassador Action, a signature WWF event for university students, was held in this area for several years in a row – boosting awareness of the area and government plans to create the national park among students throughout China.

The area was also the centre of substantial attention in 2018 when the first Black Wolf in China was spotted there during a WWF-organized waterbird survey.

And WWF continues to promote the importance of the area. Three Chinese celebrities participated in last year’s major Journey of Water campaign along the Yangtze – with one of them focused solely on high altitude wetlands around its source.

As plans for the national park gathered pace, an MOU was signed in 2016 between the government’s TRSNP Management Administration, GAC motor as a corporate sponsor, and WWF. Under this MOU, WWF-China provided comprehensive technical support on the management plan, on field surveys for waterbirds and snow leopards, and on the interpretation system. In addition, WWF helped to bring staff from the new national park to be trained in well established nature reserves in Shanghai and Hong Kong.

“WWF is proud of the support we have given to help conserve Qinghai’s high altitude wetlands over the past decade,” said Wenwei Ren, WWF-China Freshwater Lead.

“We believe that safeguarding the Three-Rivers-Source National Park will not only benefit people and nature in the area and China but also in Southeast Asian countries that depend on the Mekong,” Wenwei added.