Companies101
Molecor
The highest engineering capabilities, together with a proven experience, make of the Molecor technology an excellent, robust and reliable system. With its two business lines, pipe manufacturer and technology,
TwitterFacebookLinkedInYoutubeWeb

Installed pipes are one of the most important elements of the water network, therefore, the importance of the choice of the material to be used. At this point, it is very important to take into account the quality of the material, its durability and of course, its contribution to the environment. The environmental impact of a pipe system depends on its composition and on the application for which it is intended. The type of raw material used, the production process, the finish of the product, and its useful life are the main factors that determine efficiency and sustainability throughout its life cycle.

Among environmental management actions, water management should be based on the guarantee of its availability and quality, its efficient management, the enhancement of reclamation and reuse formulas, the creation of new resources, the modernization of water networks, and the incorporation of new technologies into productive processes. Targets should be set to promote savings and improve efficiency in water use as well as technology transfer to the pipeline sector; the use of alternative water resources is also necessary. In short, sustainable and environmentally friendly water networks must be built.

Installed pipes are one of the most important elements of the water network, therefore, the importance of the choice of the material to be used 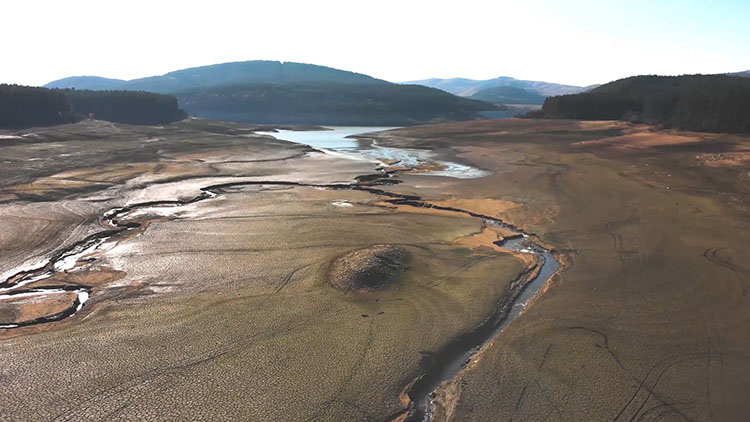 Within the context of extreme drought, absence of rain and a very low water level in the dam that supplied the city, Molecor completed a major project: that of supplying the Bulgarian city of Pernik with drinking water. This city suffered extreme drought since November 2019. This absence of rain and the very low water level in the Studena dam, with 25 million cubic meters of capacity, threatened to leave a population of 100,000 people without potable water.

In addition to the scarcity of flow from the Struma river that supplies the Studena dam, there were also enormous losses of water from the currently installed pipes, estimated in more than 75% by the Water and Sewerage Systems of the city. That is, until the installation of the new line with the TOM® PVC-O pipes of Molecor, three-quarters of the water extracted from the dam did not reach the inhabitants of Pernik. This situation, which put Pernik into the spotlight of all the Bulgarian national media and many international media, led the city authorities to implement extraordinary measures to ensure the supply to the population, which was already suffering severe daily water cuts, with 6 hours of water a day and 18 hours without supply.

From a technical perspective and its urgent installation, the Molecor Oriented PVC TOM® pipes met the high requirements of the project

These measures implied the installation in record time of a new drinking water supply line of 12,5 km in length, which would connect and reinforce, with a capacity of 300 l/sec, the supply of Pernik. After making the necessary calculations, it was confirmed that the city could be supplied from the Belmeken dam, which supplies the capital of the country, Sofia, which could absorb these needs while maintaining its water balance.

The commitment of the Bulgarian Prime Minister, Boyko Borisov, was to execute the project in record time. With that objective, the material selected by the technical managers was a Class 500 Oriented PVC pipe from the Spanish manufacturer Molecor Tecnología, with a diameter of 630 mm and a pressure range of 16, 20 and 25 bar.

The project officially started on the 29th of January, 2020. At a rate of installation of several kilometers a day and with the technical assistance of Molecor at all times, the project ended in record time, and on March 13 the supply line from Sofia to Pernik was already installed.

From a technical point of view and taking into account the urgency of the installation, the Molecor Oriented PVC TOM® pipes met with the very high requirements of this project, which included the manufacturing and supply capacity, at the required rate of five teams’ simultaneous installation, to complete the works in the indicated time of 37 days.

The Molecor Oriented PVC TOM® pipes met with the very high requirements of this project, which included the manufacturing and supply capacity

Trucks with 630 mm diameter pipes, to be installed onsite by Montagi AD, were progressively sent from Molecor's facilities, up to a total of 300, which satisfactorily met the project needs. The pipes should also be easy to handle, store, distribute and assemble onsite; characteristics such as the lightness of the Molecor TOM® pipes were essential during the development of the project.

This same lightness contributed to the connection system of the pipes, which is carried out by inserting the male end of the pipe into the socket of another in which an elastic joint is placed, and to a fast and effective installation, with minimal possibilities of failures during their connection. In addition, the Molecor connection system guaranteed total tightness of the joints, thanks to this elastic joint, made up of a polypropylene ring and a synthetic rubber lip that became an integral part of the pipe, preventing it from moving or from being rolled up during installation, thus eliminating losses from the former Pernik supply network, estimated at over 75%.

On the other hand, the installed pipeline, thanks to its higher hydraulic capacity, between 15% and 40% compared to pipes of other materials with the same external diameter, is capable of transporting a higher flow with optimal hydraulic behavior and a minimum pressure drop that leads to significant energy savings during pumping. This pumping, on the Sofia - Pernik line, involved transport from the catchment to a tank located at a height of 160 m; a tank from which the main connection to the supply network to Pernik is supplied by gravity.

The TOM® Oriented PVC pipes should also have excellent behavior in case of water hammer, sudden variations in flow and pressure, reducing and almost eliminating the possibility of breaks in the openings and closings of the network and in the starts of the supply, something that contributes to protecting all the elements of the network in a highly efficient way.

The absence of maintenance costs was also an important point in the new supply line to the city of Pernik, a characteristic that TOM® pipes also comply with. The long service life of the TOM® PVC-O pipes in the long term, over 75 years, implies enormous resource savings in the long term, thus optimizing the investment made. In addition, these pipes, certified in more than 10 countries and with several health certificates, guarantee the total quality of the transported water for consumption by the population of Pernik.

Molecor also provided technical assistance during the design and installation phases with its local staff and with Bulgaria's leading distribution partner, HTI Bulgaria, in addition to providing a very competitive final cost of installed pipe compared to alternative solutions.

Once the installation of the new supply line was completed, on March 13, and after having carried out all the necessary tests, the project was officially inaugurated by the Bulgarian Prime Minister, Boyko Borisov, on March 23, 2020. A project that has, once again demonstrated, that Molecor’s TOM® PVC-O pipes are the best solution for the conveyance of water under pressure. 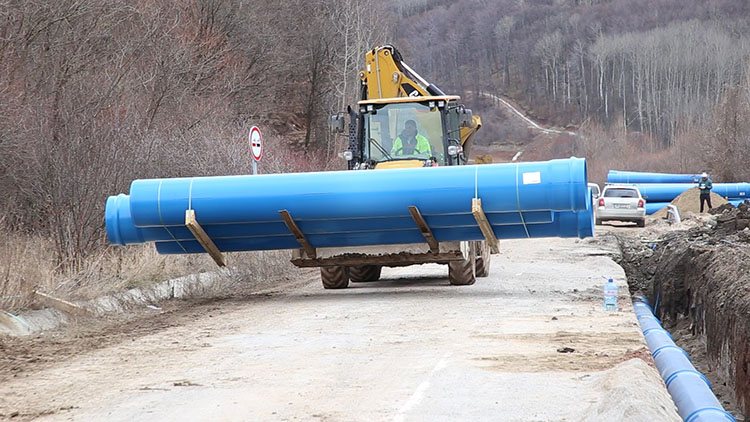 Development of the works of the pipeline Sofia Pernik. Credit: Molecor

The preservation of scarce natural water resources requires, among other actions, the avoidance of losses of piped water and the optimization of system hydraulics. Both their modernization and the choice of the material to be used in such pipelines are key factors for ensuring these challenges. Molecular Oriented pipes are increasingly used in pressure water pipeline works, being currently the highest efficiency solution for the management of hydraulic resources that demand modern infrastructure and those that have the best environmental performance.

The environmental impact of a piping system depends on its composition and application thereof. The factors determining the efficiency over the entire life cycle of a pipe are mainly: the type of raw material used, the production process, the product finish and its useful life.

Oil: Only 43% of the PVC composition depends on oil, so a higher efficiency is obtained compared to polyolefin pipes that are 100% made of oil.

Raw material: Oriented PVC (PVC-O) pipes are manufactured with a conventional extrusion process and subsequent molecular orientation, which significantly improves the mechanical properties of the product while keeping intact its chemical properties. Thus, with less raw material, pipes with better performance are obtained.

Energy: lower energy consumption during raw material extraction, the manufacturing process of the pipe, and the use of the networks. 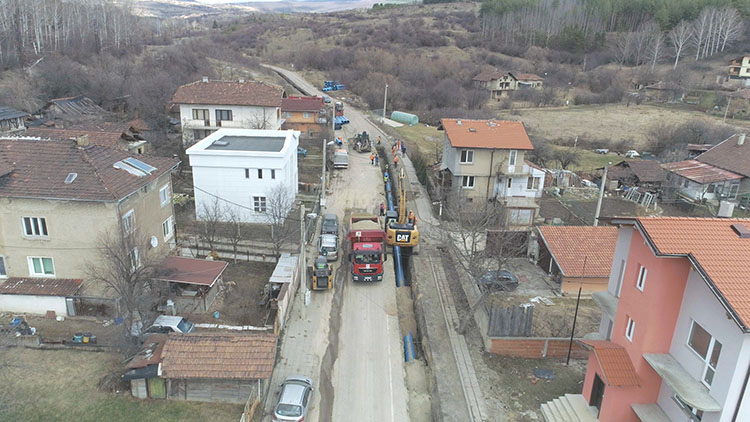 PVC is a 100% recyclable material that can be reused for the manufacture of other plastic applications with lower technical requirements. In this way, the consumption of raw materials and the volume of waste generated is reduced.

Thanks to the excellent mechanical properties, these pipes are very resistant, thus significantly minimizing breakages during handling and installation onsite, and also remaining unchanged for years, reducing the substitution of damaged or deteriorated pipes in the network, thereby saving economic resources. This resistance is particularly noticeable at low temperatures, compared to other materials that are very fragile.

The absence of maintenance costs was an important point in the new supply line to Pernik, a characteristic that TOM® pipes comply with

Thanks to the molecular orientation, PVC-O pipes include advantages applicable to both the quality of the product and its mechanical properties, as well as to an increased installation, performance and the minimization of energy costs during operation, achieving in this way very high-cost efficiency in the implementation of water networks.

They offer a better behavior in terms of respect for the environment, with a smaller environmental footprint than other materials, improving the contribution to the global sustainable development of the planet, and optimizing the consumption of natural resources.

New edition of the Technical Manual for Network Design and Use 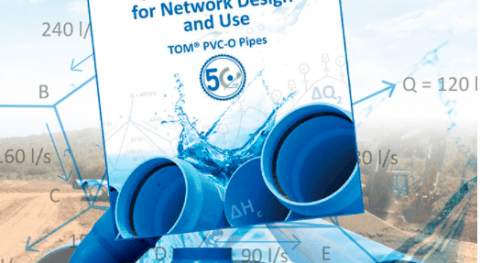 Molecor obtains certification of its "safe protocol against covid-19" 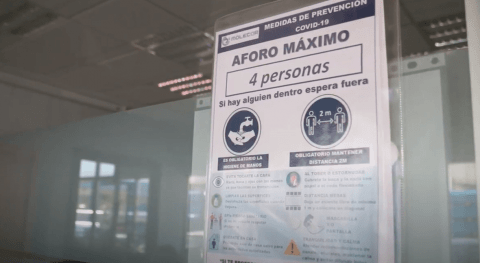 The importance of accessibility to water for Molecor 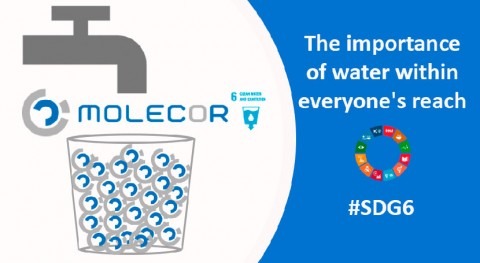 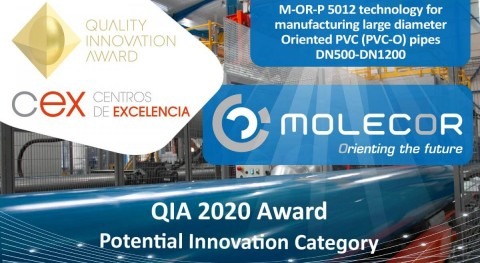 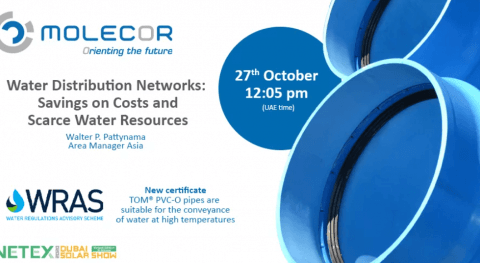 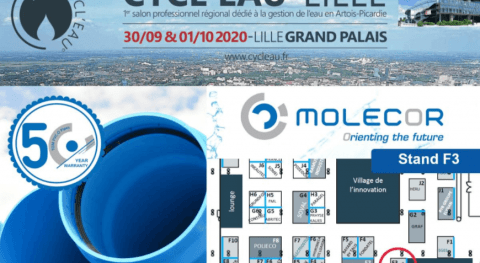 The first European standard, EN 17176, for PVC-O pressure pipes and fittings has been published 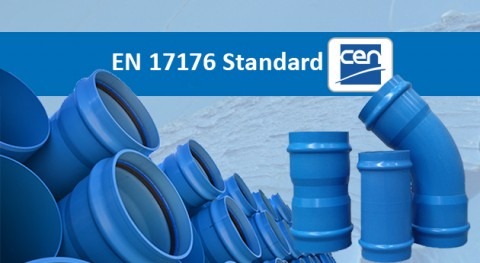 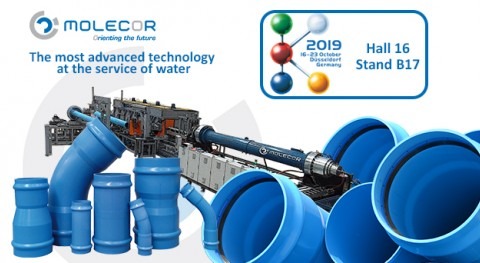 Molecor will be present at RES’EAU PRO 2019 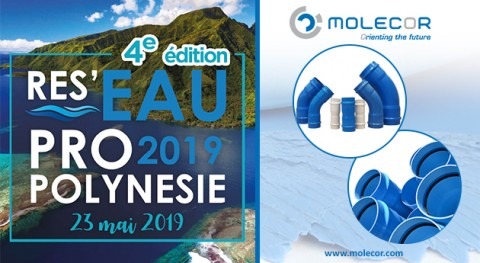 TOM® and ecoFITTOM® will be present at Utility Week Live 2019 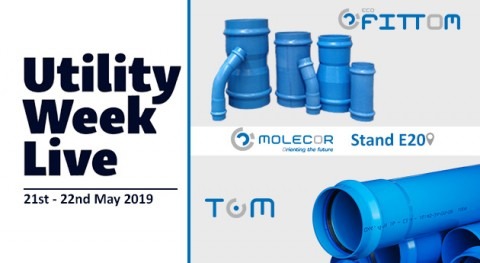 Molecor, sponsor and speaker at ISMAR10 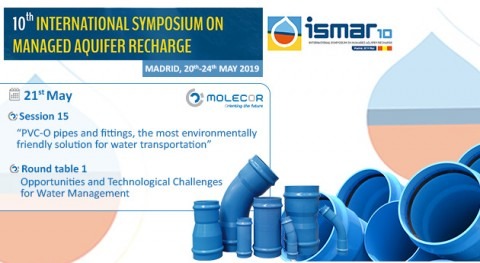 Molecor will participate at Vinyl India 2019 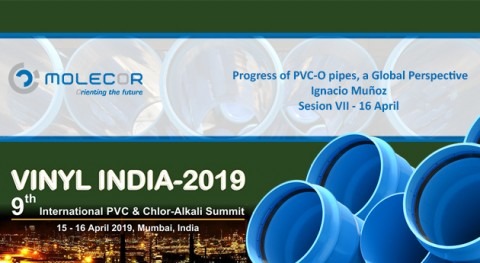 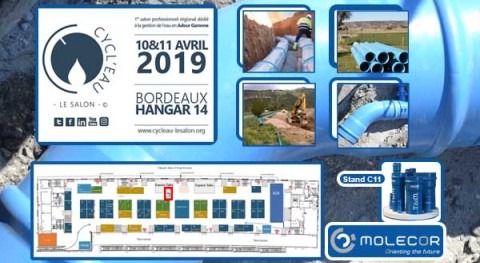 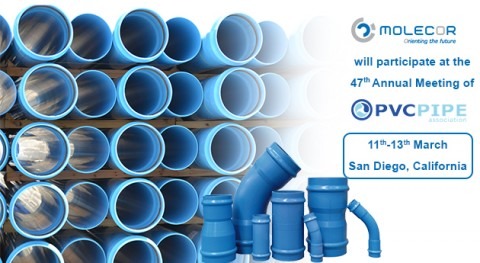