PUB, Singapore’s National Water Agency, has launched its annual water conservation campaign by shining a light on how Singapore’s water journey has advanced over the past decades, to drive home the importance of water and inspire the community to be more water conscious.

Singapore has come a long way from the early years of independence - a young, growing nation that faced challenges of poor sanitation, frequent floods, and water shortages. Today, Singaporeans enjoys modern sanitation and easy access to clean drinking water from their taps any time of the day. With continuous investments, we have built an extensive drainage system to better protect ourselves from the vagaries of the weather. ​​

More can be done to raise awareness on the efficient use of water in households. The study has found that a significant number of the households surveyed do not adopt good water practices for their daily activities such as food preparation and toilet washing:

“There is potential for households to use water more efficiently when doing their daily chores, simply by not letting water run needlessly from the tap or the hose. We are also exploring new ways to educate foreign domestic helpers to be more conscious about water use through engagement and training programmes, as they are the ones carrying out household chores,” said Mr Ridzuan Ismail, Director, Water Supply Network, PUB. ​​​​ 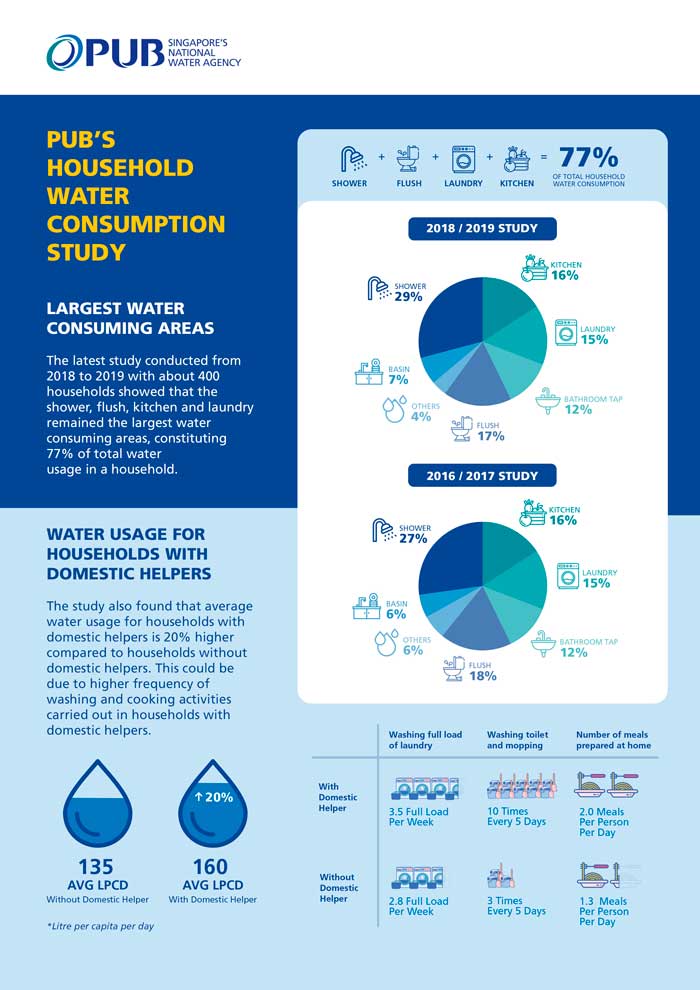 For this year’s water conservation campaign, PUB created a new TV commercial titled “We Have Come a Long Way”, with scenes specially recreated to show the water challenges Singapore faced in the early years of nationhood, juxtaposed against the various modern conveniences we enjoy today. The #GoBlue4SG movement will also return with communities and businesses coming on board to support the water cause.

As part of the movement, 38 retailers and businesses are offering blue deals and promotions in the month of March. #GoBlue4SG will culminate with the signature “City Turns Blue” event on 22 March, to coincide with World Water Day. More than 36 buildings along the Marina Bay city skyline and across the island will light up in blue to symbolise their commitment to water conservation. (Refer to Annex B for details of #GoBlue4SG retail promotions.)​​