The Mexican capital, situated in a high-altitude valley, relies mostly on water pumped from its underground aquifer and reservoirs dozens of kilometers away to meet water demand in its wider metropolitan area, home to more than 20 million people.

Reservoirs in the Cutzamala system provide one-quarter of the greater city's requirements, but by November after sparse rain, they were almost 18 percentage points below normal levels.

As levels dropped, authorities reduced flow from the reservoirs in the second half of 2020, disrupting tap water supplies and leaving some residents reliant on trucks and cisterns to meet their needs.

While it is hard to prove any single dry spell is caused by climate change, Rafael Carmona Paredes, director of the Water System of Mexico City (SACMEX), said broadly it was already having an effect.

"Climate change has definitely changed rainfall patterns," he told the Thomson Reuters Foundation. "We have to prepare ourselves in lots of ways to be able to cope with these variations in climate conditions."

Researchers have estimated natural water availability for the city could fall by 10-17% by 2050 as temperatures rise.

In response to this year's low rainfall, authorities cut Cutzamala's flow to the city by 10%, affecting 300,000 people in the mountainous southwest who normally have regular access.

Millions of others already suffer from intermittent supply. 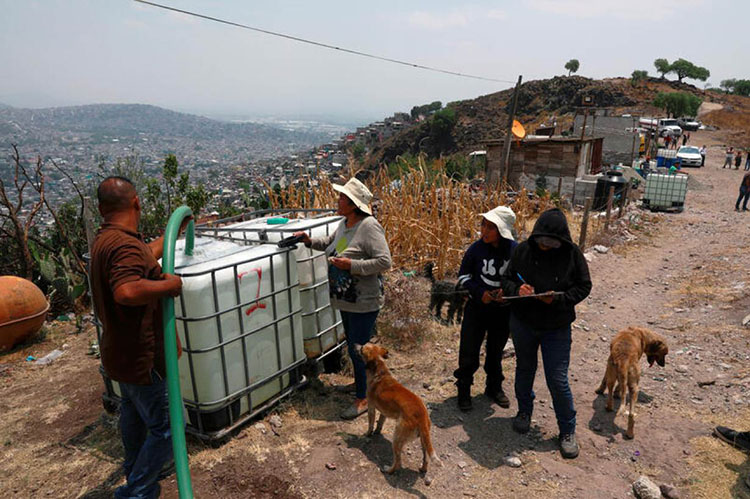 Residents look on beside a water truck as it distributes water outside houses as part of a local government effort in the Tablas del Pozo neighborhood, where water scarcity complicates attempts to sanitize the area amid the spread of the coronavirus disease (COVID-19), in Ecatepec, in the State of Mexico, Mexico, April 16, 2020. REUTERS/Henry Romero

The move is the latest in a series of partial stoppages in recent years - often for maintenance - which experts expect will continue until the city reduces leaks, saves on water use, and finds a new source either outside or by reusing more wastewater.

"Our water system in Mexico City is in bad health," said Manuel Perlo Cohen, an academic at the National Autonomous University of Mexico (UNAM). "If the problems remain, the system is going to be increasingly unsustainable."

For decades, Mexico City's metropolitan region has exemplified the challenges faced by megacities as fast population growth and creaky infrastructure are compounded by climate change.

Currently, more than half the water for the central city comes from its aquifer.

Less than half of what is extracted annually is replenished, according to the local government, and that over-exploitation has caused the city - built on a former lake-bed - to sink unevenly, wreaking havoc on drainage.

Researchers said global warming would also add multiple challenges - from lower and unpredictable rainfall, to potential algae problems in warmer reservoirs and higher demand for water because of a hotter climate.

Victor Javier Bourguett Ortiz, who runs the Valley of Mexico water basins for federal water commission CONAGUA, said the city was not yet close to a "day zero" situation where its water would run out - as nearly occurred in Cape Town in 2018.

But major efforts would be required to avoid that, he added.

"We have to work every day and quickly so that in 25 years we don't run out of water," he said. 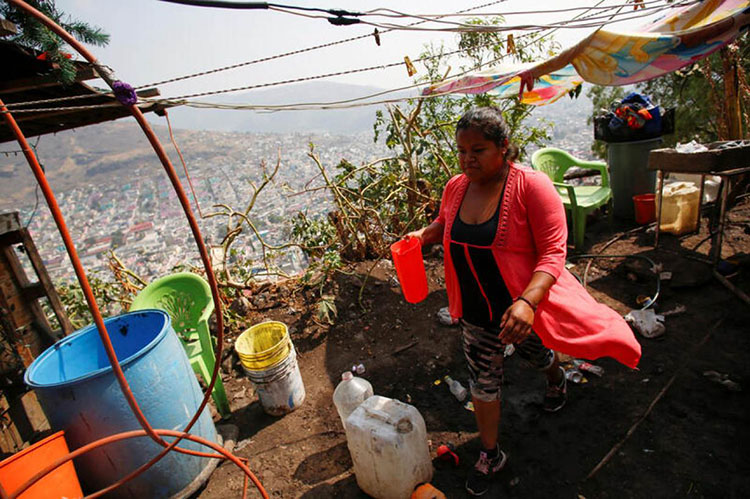 Elizabeth Orozco carries water for cooking outside her house in the Tablas del Pozo neighborhood of Ecatepec where water scarcity complicates efforts to sanitize, amid the spread of the coronavirus disease (COVID-19), in the state of Mexico, Mexico, April 21, 2020. REUTERS/Gustavo Graf

During the COVID-19 pandemic, hand-washing and sanitation have hiked water demand, meaning the Cutzamala reservoir system had a higher outflow of water earlier this year, Bourguett said.

But with reservoirs running low due to lack of rain, authorities made an initial reduction in flow to the city in August, then announced a further cut in November.

Three days a week for a total of 44 hours, up to mid-January when the reduction will be spread out more evenly, less water will be sent from Cutzamala to eke out reserves until the rainy season.

Residents in southwestern parts of the city will have to fill up cisterns or rely on water trucks the government plans to lay on.

"It's... very unequal because many of us are probably lucky enough to live in places with a cistern, where we can pay a water truck," said Ricardo Sandoval Minero, a private-sector water consultant.

"People who don't have those capabilities have to wait."

One-fifth of the city's residents lack daily access to water, according to a 2017 survey by statistics body INEGI.

Mariana, a 35-year-old resident of Ecatepec northeast of the city, said in parts of her neighborhood, tap water arrives only once every few weeks, when residents fill up cisterns and buckets to minimize their spending on water trucks.

Mariana, whose name has been changed, said on certain streets there was only enough tap water for half the houses, causing conflicts in an already violent area.

"The arguments start and even punches," said Mariana, who works for a local nonprofit.

The situation in Ecatepec has been so critical during the pandemic that CONAGUA and local authorities promised to dig new wells in the area. 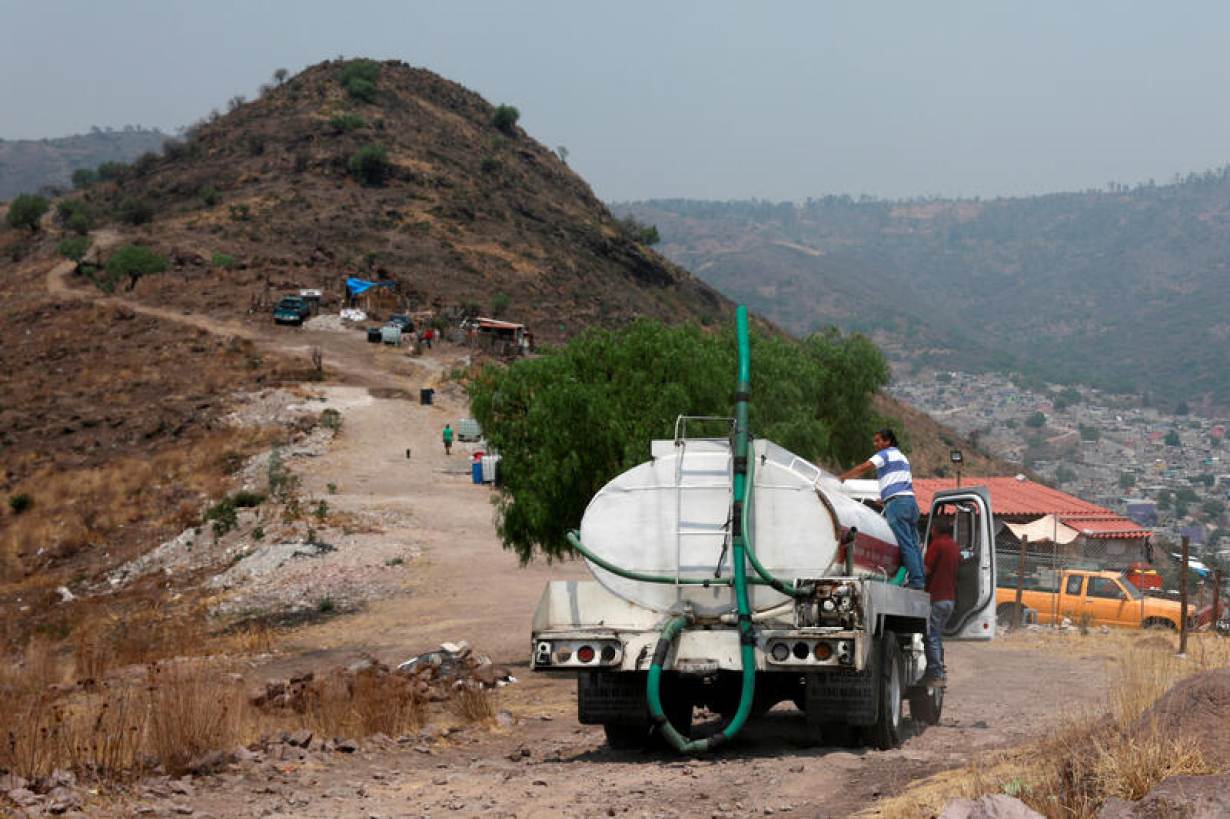 A water truck is pictured as it distributes free water to houses as part of a local government effort in the Tablas del Pozo neighborhood, where water scarcity complicates attempts to sanitize the area amid the spread of the coronavirus disease (COVID-19), in Ecatepec, in the State of Mexico, Mexico April 16, 2020. Picture taken April 16, 2020. REUTERS/Henry Romero

In the longer term though, adding wells, trucking in water and reducing reservoir flows are temporary fixes that cannot solve the bigger problem: the depleting aquifer.

Carmona said the government aimed to simultaneously ease the over-extraction of the aquifer and provide water to all homes every day of the week by the end of its term in 2024.

The goal is for sustainable use of the aquifer by 2040.

Near-term, reducing the leaks that cause up to 40% of the water supply to be lost is key to boosting supply, experts said.

"The cheapest thing is to repair the leaks," said Jose Daniel Rocha Guzman, executive director of UNAM's program of management, use and reuse of water.

The city government spent 300 million pesos ($15 million) in 2019 responding to more than 12,000 leaks, and is dividing the network into sections to help regulate pressure and stem losses.

Carmona said capture of rainwater was also being stepped up and the plan was to increase use of treated wastewater for activities like car-washing and watering plants.

Some experts believe a new external source of water will eventually be needed.

But any mega-projects would likely meet fierce resistance over the financial and social costs - and researchers like UNAM's Perlo believe there are more viable fixes.

"It's not about bringing more water in and flushing it out anymore, but instead trying to make the city a place that can integrate the water cycle," he said.