Mars may seem to be an alien world, but many of its features look eerily familiar – such as this ancient, dried-up river system that stretches out for nearly 700 kilometres across the surface, making it one of the longest valley networks on the planet.

The area of Mars shown in these new images from ESA’s Mars Express spacecraft lies just south of the planet’s equator, and is known to have been shaped by a mix of flowing water and impacts: events where rocks sped inwards from space to collide with the martian surface.

Both of these mechanisms are visible here: a number of impact craters, some large and some small, can be seen speckled across the ochre, caramel-hued surface, and a tree-like, forked channel cuts prominently through the centre of the frame.

This ancient valley system is named Nirgal Vallis, and was once filled with running water that spread across Mars. By exploring the characteristics of the surrounding craters, scientists estimate the system’s age to be between 3.5 and 4 billion years old.

The part of Nirgal Vallis captured in these images lies towards the western end of the river system, where it is slowly spreading out and dissipating; the eastern end is far less branched and more clearly defined as a single valley, and opens out into the large Uzboi Vallis – the suspected location of a large, ancient lake that has long since dried up.

Nirgal Vallis is a typical example of a feature known as an amphitheatre-headed valley. As the name suggests, rather than ending bluntly or sharply, the ends of these tributaries have the characteristic semi-circular, rounded shape of an Ancient Greek amphitheatre. Such valleys also typically have steep walls, smooth floors, and, if sliced through at a cross-section, adopt a ‘U’ shape. The valleys pictured here are about 200 m deep and 2 km wide, and their floors are covered in sandy dunes; the appearance of these dunes indicates that martian winds tend to blow roughly parallel to the valley walls. 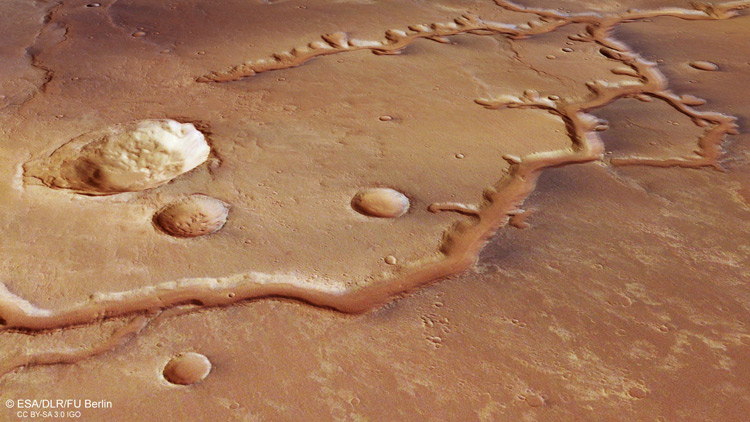 We see valleys like this often on Earth, including valleys found in the Chilean Atacama Desert, the Colorado Plateau, and on the islands of Hawaii. Mars also hosts a few of them, with Nanedi Valles and Echus Chasma joining Nirgal Vallis as clear examples of this intriguing feature. Both of these features also resemble terrestrial drainage systems, where meandering, steep-sided valleys – thought to have been formed by free-flowing water – have carved their way through hundreds of kilometres of martian rock, forging through old volcanic plains, lava flows, and material deposited by strong martian winds over time.

Valleys such as Nirgal Vallis are ubiquitous in the low-latitude regions surrounding the martian equator, indicating that these areas once experienced a far milder and more Earth-like climate. Despite the arid, hostile world we see today, Mars is thought to have once been a far warmer and wetter planet – and we see signs of this in the diverse mix of features and minerals found across its surface.

Scientists believe that Nirgal Vallis formed in a similar way to morphologically similar valleys we see on Earth. As there appear to be no branching, tree-like tributaries feeding into the main valley of Nirgal Vallis, it is likely that water was replenished on ancient Mars by a mix of precipitation and overland flow from the surrounding terrain. 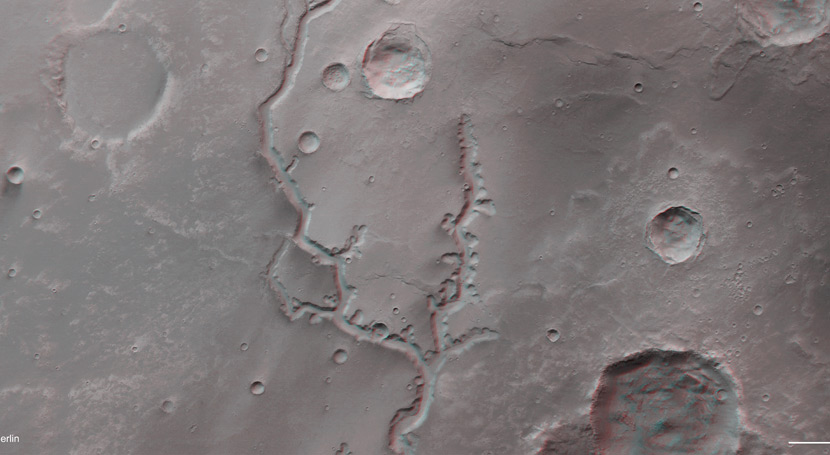 The system may also have its roots in a process known as groundwater sapping: when water struggles to travel vertically through a medium, and so instead continually seeps laterally through material in layers beneath the surface. We see this kind of mechanism on Earth in environments where surface material is very fine and loose and thus difficult for water to penetrate – largely silty, sandy, unconsolidated, and fine-grained environments, where lower layers of the surface are permeable and friendlier to water than those above.

The spacecraft captured these observations using its High Resolution Stereo Camera, an instrument that is mapping the whole surface Mars in full colour and at high resolution. Its aim – of characterising and understanding the Red Planet in its entirety – will be supported and continued by the ESA-Roscosmos ExoMars Trace Gas Orbiter, which arrived at Mars in 2016, and the ExoMars Rosalind Franklin rover and its accompanying surface science platform, which will arrive next year. Together, this ground-breaking fleet will help unlock the mysteries of Mars.