Hassan Abdel Salam knew he was wasting a lot of water every time he flooded his fields to irrigate his mango crop, but wasn't aware of any alternative.

Then the farmer from northern Egypt learned about drip irrigation - putting tiny amounts of water just where it's needed - through a new government scheme.

Now pipes with small holes snake around his 10-feddan (10-acre) farm, dripping water directly to the base of each plant.

Since adopting the method at the start of the year, the 53-year-old said his farm in the village of Mansouriya, near Giza, uses at least 25% less water, fertiliser and energy and his harvests have increased by nearly 20%.

"It was a difficult decision for me at first because I was not familiar with the new system," he told the Thomson Reuters Foundation.

"But, when I was told by other farmers that it has a lot of benefits, I started applying it and it turned out to be beneficial, as I was told."

Abel Salam is among hundreds of farmers in the country's north who have turned to water-saving sprinklers and drip irrigation in the latest phase of a government strategy to reduce water consumption and improve agricultural productivity.

Egypt suffers from significant water shortages, due to the combined effects of climate change, pollution and a growing population with increasing water demands, water and development experts say.

A new mega-dam upstream on the Nile River in Ethiopia also makes the country's access to river water - which it heavily depends on - less certain, officials say.

Negotiations have not yet resulted in an agreement on how much and when the hydropower dam can be filled and discharged.

According to Egypt's statistical agency, about 70% of the country's total water comes from its share of the Nile River, which amounts to 55.5 billion cubic meters a year based on a 1959 deal with upstream Sudan.

Egypt's farmers used more than 61 billion cubic meters of water in the fiscal year 2016/2017, making them by far the biggest water consumers, according to the agency.

But the 1959 deal isn't recognised by Ethiopia, which has now started filling the reservoir behind its new Grand Renaissance Dam. 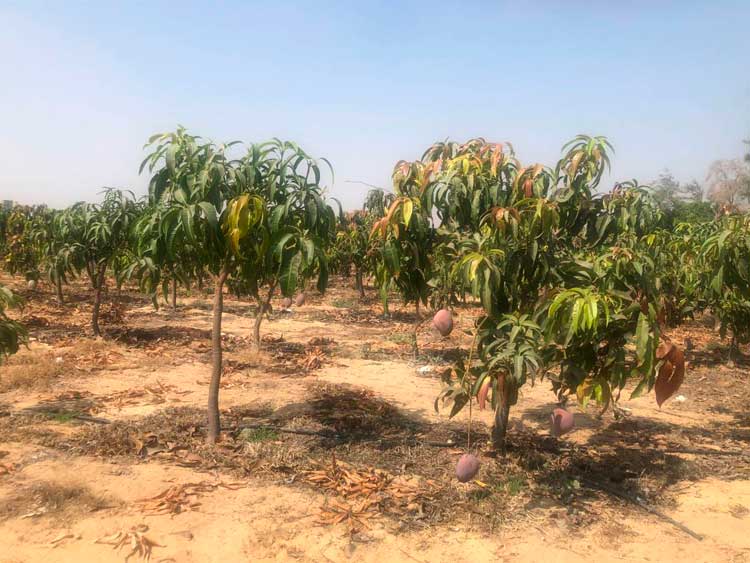 A drip irrigation system applies water to a mango field in the village of Mansouria, in Egypt’s Gize governate, on Aug. 24, 2020. Thomson Reuters Foundation/ Menna A. Farouk

The governments new irrigation initiative, launched in January, is part of a wider 20-year water management plan that started in 2017, said Mohamed el-Sebaei, a spokesman for the water ministry.

The aim is to convert 5 million feddans to drip and sprinkler irrigation, up from the 1 million currently using those methods, he told the Thomson Reuters Foundation.

The responsibility for paying for, overseeing and maintaining the switch to more modern irrigation systems falls to the farmers. But to help, the government is offering loans farmers can pay off in instalments, Sebaei said.

Farmers who adopt the new methods will also get smart cards that give access to subsidized fertilizers, pesticides and seeds, he added.

"Through this, we want to encourage farmers to do the transition and lower costs for them," the spokesman said.

Agriculture provides work for more than half of Egypt's population, according to the U.N.'s Food and Agriculture Organization.

Abbas Sharaky, an associate professor of economic geology at Cairo University, said the fixed amount of water provided in the now-imperiled water-sharing agreement with Sudan is one of the challenges Egypt faces as it tries to tackle its shortages.

With a booming population and generally inefficient water management, that volume of Nile water is no longer enough, he told the Thomson Reuters Foundation.

"The population is growing and demand is rising while at the same time the share is the same," he said.

The country currently has about 570 cubic meters (150,000 gallons) of water per person per year - just over half of the 1,000 cubic meters hydrologists say is the minimum to avoid water scarcity, according to the Ministry of Water Resources and Irrigation. 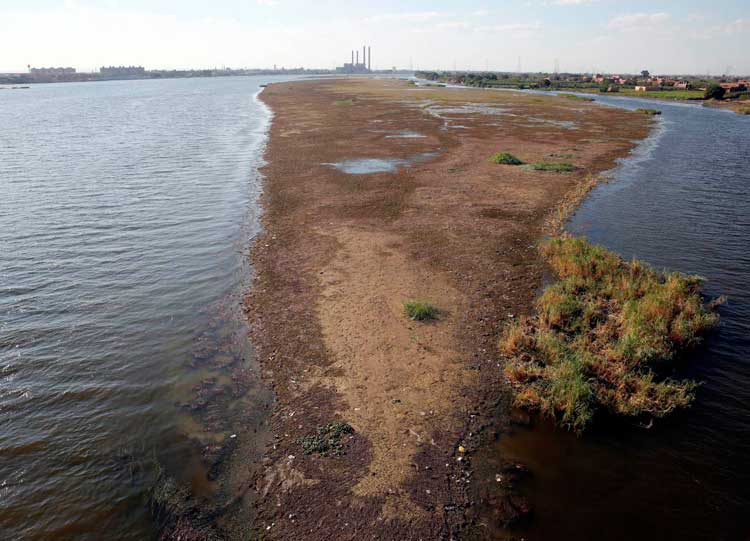 A piece of land is seen at low tide in the Nile River in Cairo, Egypt, November 23, 2017. REUTERS/Amr Abdallah Dalsh

'We have to be prepared'

To deal with the growing shortfall, the government is building seawater desalination plants and constructing wastewater recycling facilities, as well as promoting water-smart irrigation, Sebaei said.

Sharaky noted that while sprinklers and drip irrigation can lower water use for many farmers, the techniques cannot be used on farms growing popular crops like wheat and sugarcane.

"The new methods can only be applied to crops of fruits and vegetables...they will not work with other water-hungry crops," he said.

Another challenge, Sharaky added, is convincing farmers to pay to switch to the new irrigation methods.

"Farmers are already struggling financially and asking them to pay extra money would increase burdens on them," he said.

Sayyed el-Azagi, a tomato farmer in el-Kanater el-Khairia, a city a few kilometres east of the village of Mansouriya, has not made the switch yet, saying it is too expensive.

"Converting from flood irrigation to sprinkler or drip irrigation would cost a lot of money and I am already suffering financially as a farmer. I will never be able to afford that," he told the Thomson Reuters Foundation.

The government has given farmers who use older irrigation methods a one-year grace period to move to the new systems or face a fine of 3,600 Egyptian pounds ($230).

"The benefits of converting to these new methods are many and they are worth the money," he said.

Abdel Salam, the farmer who made the switch in Mansouriya, said he plans to spread the word to other farmers about how the method has transformed his farm.

"We do not know what tomorrow will bring. We have to be prepared," he said.