The evolution of rates in desalination (Part II)

As we mentioned in the first part of this article, desalination rates have reached historic lows in 2018, thanks to advances in technology, lower costs, the experience of companies and the liquidity of the market, surpassing the barrier of less than US$0.50 per desalinated cubic meter. In this second part, we would like to break down this rate and see which elements make it up, in order to better understand the selection of rates when a project is closed.

The price of desalinated water, reflected in the rate, is made up of different costs that could be grouped into three large blocks: Capex, opex and financial costs (debt and capital). There are also other components such as insurance and taxes, which vary widely depending on the project and the region, but that we will not go into here.

This is the total sum of the investment to be made, which may include, in addition to the construction of the desalination plant itself, the associated costs of the land where the plant will be built and the development expenses prior to the construction (feasibility studies, engineering, expenses incurred during the commercial development, etc.). The capex of a desalination plant ranges between 0.65 and 1.2 million US$ for each 100 m3/day, and depends on many factors such as the design, location, size, intake type or storage capacity. Capex has decreased progressively over the last 20 years, reaching competitive values in the last 2-3 years.

The opex or operating expenses includes the operating labor, costs to replace elements, cost of chemical products, and the most important of all, energy costs. 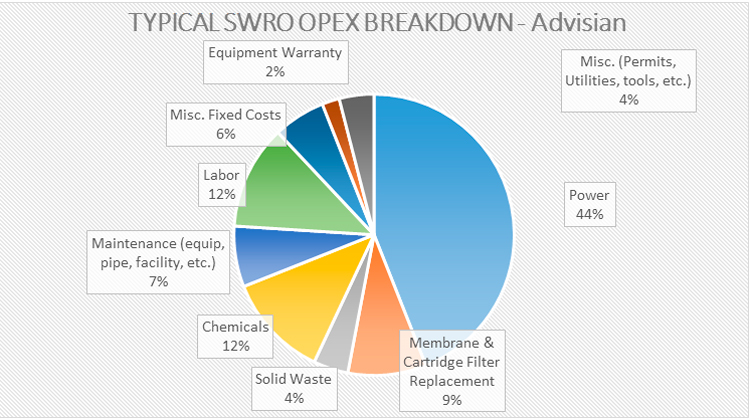 The latter factor has changed enormously since the 1990s. At the beginning of the 1990s, Pelton turbines were introduced into desalination as the standard energy recovery device. They decreased energy consumption from 8 and 10 kWh/m3 to 5-6 kWh/m3. Later, the next generation of recovery devices appeared, initially called “positive displacement systems” and today known as “isobaric devices” or “pressure exchangers”. Pressure exchangers use up to 95% of the energy that remains in the brine, although 1% is lost to facilitate the discharge of the depressurized brine. In parallel, to achieve greater energy savings, membrane manufacturers are building membranes that can operate at lower pressures without decreasing production, or even increasing it. The limit of 3 kWh/m3 of specific consumption in the reverse osmosis phase can be considered the objective to pursue to improve the existing systems, and the main plants are very close to it. There are already many plants that have been designed to work in the range of 3.2 kWh/m3.

In addition to the equipment component, another factor to be taken into account in the energy costs include the local energy prices, which vary widely from one country to another. Transmission distance, connection rates and possibly rates at the installation location play an important role in the price of supplying energy and therefore the operating costs. For large desalination plants, considering locating the facility next to a power plant may be beneficial due to the advantages that are inherent in this combination.

In addition to the equipment component, another factor to be taken into account in the energy costs include the local energy prices, which vary widely from one country to another

Another important point to optimize energy costs is how to choose the most suitable energy rates and the combination of production and storage. An adequate production management strategy could significantly reduce the cost of water.

And lastly, the large factor that will greatly advance optimization of rates is the combination of desalination with renewable energies. The offer of renewable energies as a primary energy source is exceeding the current prices of gas and oil, in addition to providing the advantage of zero CO2 emissions.

Financial costs represent an important part of the costs of desalination due to the large amounts that must be financed when a project is developed. These are normally distributed among private capital, which is provided by the developers themselves, and the debt, which is provided by financial institutions. The leverage between one and the other is configured based on the risk of the country, the risk of the project and the client’s flexibility, and normally ranges between 30/70 and 15/85 equity/debt. After the investment of this capital, the returns that are requested vary depending on the project risk, with the debt sometimes cheaper than the injection of private equity. The high degree of liquidity and maturity of the financial markets, combined with low interest on debt in recent years, have undoubtedly make desalination more competitive.

Due to all of these variables, the production costs of desalinated water may be very complex, and the differences between projects may not be directly comparable. The average production cost of 1 m3 of desalinated water for reverse osmosis projects has ranged widely, from 0.60 US$/m3 for large plants (325,000 m3/day) and 1.25 US$/m3 for small plants (10,000 m3/day). However, the costs may reach 3.20 US$/m3 for plants with very small capacities (less than 4,000 m3/day), due to the costly specific conditions of intake, discharge and transport for their locations. 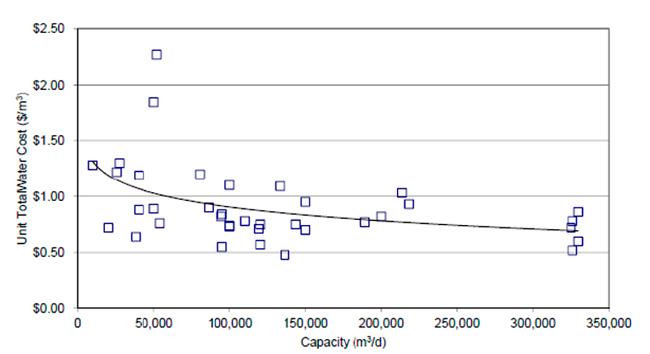 In addition, desalination projects, from their contextualization, encounter challenges such as demand studies, feasibility plans, the search for financing, environmental regulations in the country, and sometimes, the opposition of pressure groups, which significantly increase the time required for their development and financial closure (between 2 and 4 years). However, there is extensive liquidity and the markets are focusing on the water sector, due to the security of the economic and social returns of this type of project. According to the World Health Organization, investment in water and sewerage generate large economic benefits, including an estimated increase of 1.5% in world GDP and a return of US$4.3 for every dollar spent on these services.

In conclusion, we can say that desalination, with its current rates, in addition to being a mature and proven technique for obtaining drinking water with suitable quality and quantity, is encountering fewer and fewer economic and environmental barriers due to the improvements in its technology and processes, and is a sustainable and viable solution for fighting against the scarcity of water in all areas of the planet.

Non-conventional water resources to mitigate the impact of climate change 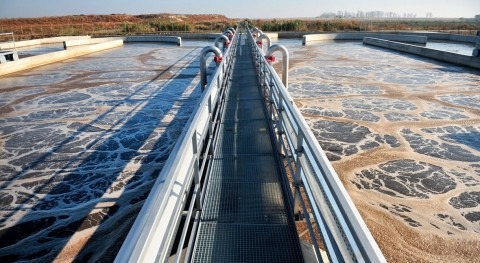 The evolution of rates in desalination (Part I) 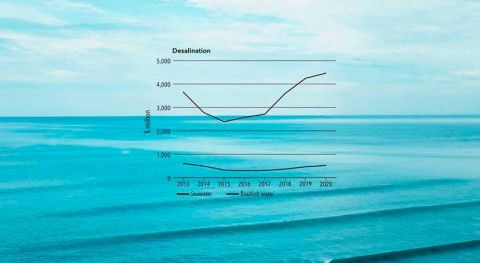