On the morning of the 12th October, the inhabitants of the northern shore of the Mar Menor, Europe’s largest saltwater lagoon, woke up to a nightmarish landscape: thousands of dead or dying fish lay on the beach or floated on the water. The waters of the peaceful 17,000-hectare lagoon had become lethal and the marine wildlife trying to survive was crowding its northern end. This terrible event took place in just 200 hectares in front of the Salinas and Arenales de San Pedro del Pinatar natural reserve. The images were all over the world.

Over three tons of smelly fish and all kinds of crustaceans were collected in two days from the beaches. Tests confirmed they had died of anoxia (lack of oxygen) and several explorations confirmed that an incalculable amount of them could be found at the bottom of the lagoon. The waters of the Mar Menor had become a “clinically” dying ecosystem and many ecologists called the disaster Europe’s worst environmental catastrophe. Many knew that the agony had begun many years ago.

The flood and much more 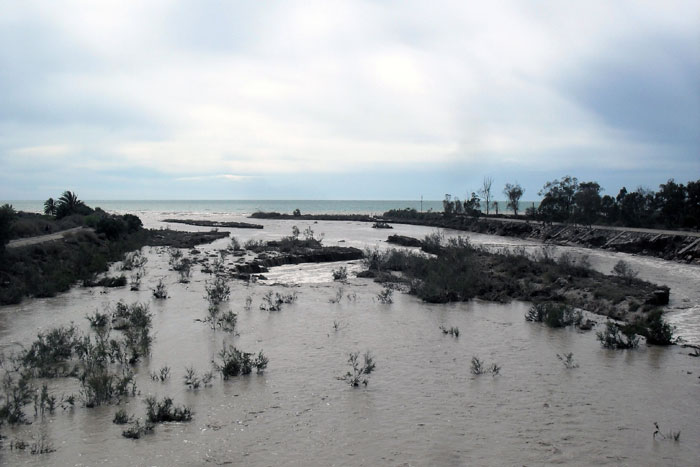 On the 12th and 13th September, rainfall of more than 450 liters per square meter caused floods towards the Mar Menor, triggering a catastrophe that had been developing for decades and had been repeatedly announced by scientists and environmentalists. © WATERLAT GOBACIT.

Just one month before, the population in the area, along with the rest of Murcia and the south of Alicante, had experienced one of the worst cold drop episodes of the last decades. On the 12th and 13th September, rainfall of over 450 liters per square meter was registered in southeastern Spain, between Murcia and Alicante, in just 48 hours. Floods were extremely violent, causing eight deaths, while more than 700 people had to be rescued.

Practically all streams and drains in Campo de Cartagena, the region covered by the Mar Menor, flow into the lagoon. According to the Spanish Institute of Oceanography (IEO in Spanish), the cold drop discharged 60 cubic hectometers of water that generated around 100,000 tons of entrained sediments. These fresh waters, in addition to soil, contained between 500 and 1,000 tons of nitrates, more than 100 tons of phosphate and 35 tons of ammonium and heavy metals from old abandoned mining exploitations, a polluting combination that was immediately considered to be the main cause of fish mortality.

As is often the case in natural disasters, the phenomenon itself tops the list of direct perpetrators of damage in official explanations. They sometimes tiptoe over the mistakes that have generated the exposure and vulnerability of people and ecosystems to the violence of nature. The Mar Menor disaster is an example of this.

The Mar Menor fishermen knew very well that in the 1987 floods there was one third more rain in the floods and there was no massive mortality of fish. Why this time? A few days later, science proved that the floods were the cause of a catastrophe that had been developing for decades and had been repeatedly announced by scientists and environmentalists.

When the Mar Menor waters received this polluting flood, they had already undergone an advanced eutrophication process, a process in which nitrates and phosphates, mainly originating from fertilizers and wastewater, fertilize algae and phytoplankton, which reproduce in an uncontrolled manner. This unbalances the environment and prevents light from reaching the bed of the lagoon, inhibiting the photosynthesis of seagrass, which ends up dying. The greenish color of excessively eutrophicated water is commonly known as “green soup”.

Being less dense than salt water, the fresh water from the floods remained in a stratified layer on the surface, and the organic matter from the bed of the lagoon, accumulated by eutrophication, started decomposing causing anoxia and generating very toxic compounds, such as sulfides. This situation remained stable for more than three weeks and the fish and crustaceans from the deep bottom fled towards the upper layer searching for oxygen. But on the 12th October, the east wind gathered force and swept the top layer of fresh water southwards, bringing the oxygen-free and toxic layer of water to the surface, killing every living thing in its path. The surviving wildlife fled to the shallow waters of the north and was trapped against the beach.

How did it come to this? Chronicle of a foretold disaster

Decades of errors have created this disaster. In 1979, the Tajo-Segura transfer changed the dry crops of Campo de Cartagena into irrigated land, a project already conceived in 1933 based on making the most of the exceptionally fertile land and the high degree of sunshine to develop intensive horticulture. The Segura basin became “Europe’s vegetable garden” in just a few years, with a high productivity and profitability. The agricultural transformation ended in 2011 with the disappearance of the old dryland terraces and the farming in terraces, practices that contributed to retaining water and therefore reducing the violence of floods.

The tourist industry also developed, paving large extensions of land and increasing the uncontrolled wastewater discharges. In 1973, to encourage sports sailing, one of the Manga del Mar Menor channels was widened, a fact that lowered the temperature and salinity of the water and led to the invasion of foreign species from the Mediterranean. Between 1986 and 2016, the urban surface increased by 6,000 hectares around the lagoon and it was not until 1992 that integral sanitation was addressed with an agreement between the Autonomous Region and the Ministry of Public Works for the construction of water treatment plants and sewer pipes. 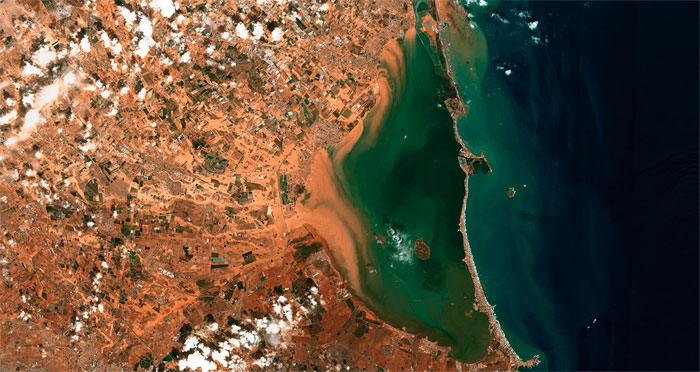 Image captured by the Sentinel-2 satellite on the 13th September 2019. The runoff produced by torrential rains in Campo de Cartagena can be seen, which flows into the Mar Menor. © ESA COPERNICUS

Water from the transfer did not prevent the progressive overexploitation of the aquifers in Campo de Cartagena. Illegal wells spread out of control and soon water in the deeper water tables was exhausted. The extraction then focused on the Cuaternario aquifer, the most superficial one. In this layer, water is abundant, but with a high degree of salinity as it is connected to the Mar Menor. For this reason, furtive desalination plants also began to proliferate in order to take advantage of the extracted water, which meant that the brine waste was dumped without any kind of control. These waters were increasingly laden with nitrates and therefore the discharges of the desalination plants were highly polluting.

The drought from 1991 to 1995 led the Segura River Basin (CHS in Spanish) to authorize the extraction of water from the Cuaternario aquifer to be desalinated and used for irrigation. A chaotic situation began, which tried to be stopped by the central government with a Royal Decree to regulate the desalination facilities. The granted licenses had a validity of five years and the CHS considered the collection of waste with a network of “brine pipelines” to transport it to a treatment plant and prevent it from ending in Mar Menor, thus reusing the water. But the network proved to be insufficient to assimilate all the brine produced by the new desalination plants. In view of this, the CHS did not renew the licenses, but neither the irrigators nor the number of desalination plants in operation were controlled.

The entity recently acknowledged the existence of more than 9,500 hectares of illegal irrigation in the Mar Menor area

From then on, the situation ended up out of control and the CHS estimated the number of wells that had been extracting water without a permit at around 1,000. The entity recently acknowledged the existence of more than 9,500 hectares of illegal irrigation in the Mar Menor area, although it was not aware of the exact amount of water being extracted by pumping.

The precursor to the disaster 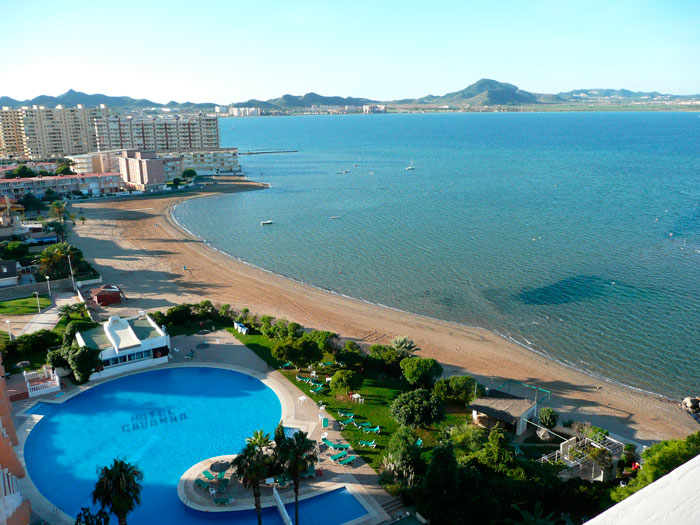 The ecological balance of the Mar Menor began to show clear signs of degradation in the late 1990s. Scientists and environmental groups repeatedly sounded the alarm, but it was not until 2016 that public opinion became aware of the dimension of the problem. In the summer of that year, the enormous growth of phytoplankton due to eutrophication generated a visible “green soup” that triggered the alarms. This episode led to the drafting of the project Solutions for the Objective of Zero Dumping in Mar Menor for the Ministry of Environmental Transition, with the participation of different administrations.

In 2018, the Regional Government of Murcia passed the Law on Urgent Measures for Mar Menor with the main goal of reducing nitrates in water. In the summer of that same year, the waters became temporarily transparent, generating false hopes of recovery that were denied by the members of the Scientific Committee of Mar Menor, created by the autonomous region. Timed proved science right again and in August 2019 a new rise in phytoplankton was evident. The time bomb was armed waiting for another great flood. It arrived in less than a month.

In 2018, the Regional Government of Murcia passed the Law on Urgent Measures for Mar Menor with the main goal of reducing nitrates in water

What has happened in the Mar Menor is an example of the perfect storm that triggers an environmental disaster: soil alteration, intensive agriculture based on fertilizers and hydric overexploitation, uncontrolled urban growth, plenty of illegal extractions and discharges and inefficient governance.

The Environmental Prosecutor’s Office of the Region of Murcia has opened an investigation and society is demanding that the administrations be held responsible for their failure to comply with the laws, and for ignoring the repeated alarms raised by science and society. Since the Water Law of 1985, the regulations of the European Directive 91/676/CEE and the Royal Decree 261/1996 for the protection of waters against pollution produced by nitrates used in agriculture, it seems that governance in the Mar Menor has been at a minimum.

Recovering the awareness and effectiveness of an Administration connected to reality and well-structured is the first step towards the difficult return of life to the Mar Menor. Science demands a revision of the development projects and models from the perspective of solutions based on nature which, disaster after disaster, is showing us the high cost of environmental deterioration. 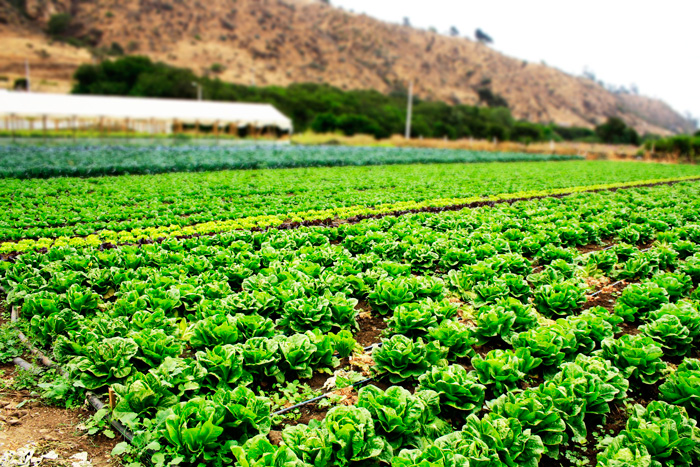