Do we eat sustainably? The meaning of this sentence is different for someone living in NYC, in Dhaka, or for a farmer in the French Burgundy, in Anantapur or in the African Sahel. The responses do not allow us to draw global conclusions either. The food challenge faced by mankind is enormous: in addition to the need of water and land there is now the carbon footprint. The climate crisis is present in the diet of those who have the privilege of eating breakfast, lunch and dinner every day. And what about all those who don’t? 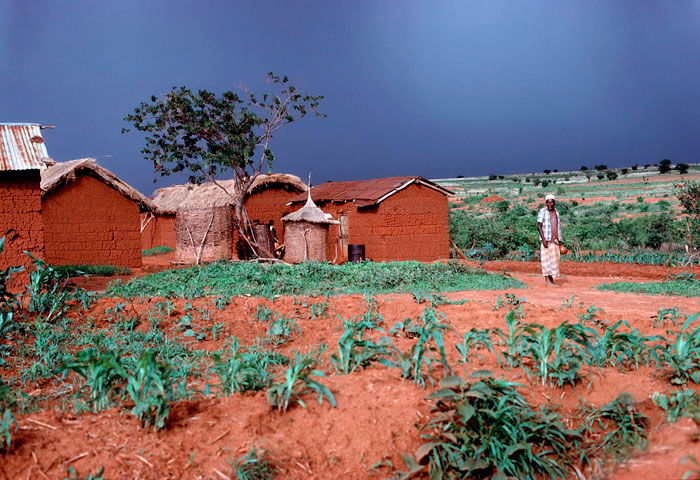 The global food security is threatened by pressure on natural resources such as water, a pressure that climate change will worsen in areas where water scarcity already exists. © UN Photo/Wolff

The climate crisis has reached our diet. At the COP 25 in Madrid, the IPCC has presented its Special report on Climate Change and Land published last August. It has been one of the documents with more repercussion in the media, probably because it directly affects our way of life.

The IPCC delves into the relationship between human nutrition and the emission of greenhouse gases (GHGs) and adds this factor to those of land use and water, so far the two elements used to assess food sustainability. In addition to the increase in the productivity of food and the reduction of waste, the IPCC fosters a global “balanced diet” to mitigate global warming; the goal is to reduce the carbon footprint of the production and commerce of food and to gain land for other non-food uses.

The document estimates that by 2050, adequate diet changes can reduce GHGs by 0.7-8 gigatons of carbon dioxide equivalent (GtCO2eq) each year, which is the sum of carbon dioxide, methane and nitrous oxide, the gases causing global warming. According to the IPCC, by that time, the adoption of these dietary habits could also free up several million km2 of land, promote more sustainable land use management, save water and combat desertification while improving public health. Both FAO and WHO subscribe to the conclusions of IPCC as key factors to attain the SDGs by 2030, in view of the dramatic population growth and the threat of climate uncertainty.

These proposed dietary changes are based on encouraging the consumption of products of plant origin, and on the reduction of those of animal origin, which also need to be produced with low emission methods. In the industrialized world, the report comes at a time in which the gastronomic and ethical aspects of food have reached media stardom. Concepts such as organoleptic and the respect for animals coexist with a growing concern for health in large sectors of the population, which has led to a notable increase in veganism and other diets that exclude processed foods or those not grown organically.

The world food problem is complex. This video by Carlos Mario Gómez (@camagogo), professor of Fundamentals of Economic Analysis and Environmental Economics at the University of Alcalá and researcher at IMDEA Water in the EU, summarizes it and puts us in front of the inevitable challenge we need to address to face the future:

The relationship between the food needs of the population and the use of the land and water resources has been in crisis for decades. According to the UN Department of Economic and Social Affairs, the world population, currently around 7.7 billion, will approach 9 billion by 2030. The UN has established that date for the attainment of the Sustainable Development Goals (SDGs) and food security, included in SDG 2, goes hand in hand with the attainment of the access to water, which is SDG 6.

The Food and Agriculture Organization of the United Nations (FAO) has warned for decades that the unequal distribution of productivity, the over-consumption in industrialized countries and the waste of food are the main reasons why adequate nutrition does not reach everyone.

At present, agricultural and livestock production to feed humans all around the world already takes up 43% of the available land, without including deserts or frozen territories. This land produces 3.7 million tons of food every day which, quantitatively, would be enough to guarantee food for the entire world population. This vital activity for mankind consumes 70% of all freshwater on the planet.

But this land and this water are still not capable of feeding everyone: in its 2017 report, The future of food and agriculture, FAO estimates that around 795 million people starve and over 2 billion people lack basic micronutrients in their diet, or suffer from disorders such as overfeeding; that is, they feed themselves in a way that is inadequate for their health, either by excess or by default. In that same report, it warns that global food security is threatened by pressure on natural resources such as water, a pressure that climate change will worsen in areas where water scarcity already exists.

Awareness of food's water footprint has also reached the haute cuisine. In this video, Josep Roca, from the restaurant Celler de Can Roca, in an interview with the We Are Water Foundation, explains this clearly:

The IPCC report adds gas emission data to define the sustainability goals of the current global food system: agriculture and the use of land represented over 25% of the annual emissions of GHG into the atmosphere between 2007 and 2016. But if the emissions linked to the food industry are added, this proportion can reach 37%.

Most concerning is that between 25% and 30% of all food produced in the world is thrown away, a waste that can reach 1.6 billion tons of food every year. The IPPC report adds that this loss is responsible for 8-10% of the greenhouse gas emissions generated by human activities (3.3 billion tons of CO2 equivalent per year) and involves an annual squander of 250 km3 of water, the equivalent to three times the volume of Lake Geneva in Switzerland.

Thus, the problem of the GHG is added to that of water: the equation of planetary sustainability in pursuit of the SDGs must connect the concepts of carbon footprint and water footprint. In this sense, the consumption of meat, questioned for decades due to its high water footprint, is increasingly questioned now due to its carbon footprint, affecting its sustainability. The FAO data, endorsed by the IPCC, point out that livestock is responsible for 14.5% of the GHG, i.e. it is the sector which emits the most GHG after transport (which represents 22%). It also generates 92% of ammonia emissions, a compound that decreases the quality of the soil by acidifying it. 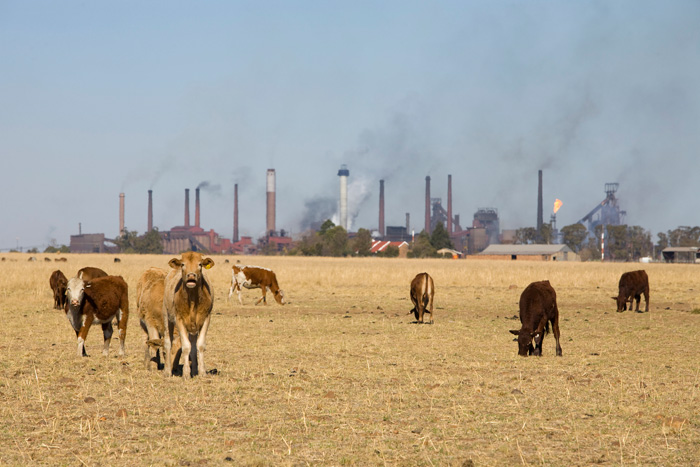 Livestock is the sector which emits the most GHG after transport. © John Hogg/World Bank

In reality, a 100-gram veal fillet releases 2.7 tons of CO2 equivalent, while it requires 1,500 liters of water on average to reach our plate; a much larger quantity than that of a modest 100-gram plate of lentils, which generates just 1 ton of CO2 and implies a water consumption of around 240 liters. (To calculate the water footprint of food, the Foundation launched the app for mobile phones We Eat Water, very useful as it also includes many recipes from all around the world).

Although the proteins in pulses are not as nutritional as the ones found in meat, nutritionists recommend them for their high content in fiber and other micronutrients, which are very beneficial for our health. It is a fact that pulses are a viable food for almost the entire population of the planet, and the UN has been pointing out the advantages of beans, broad beans, lentils and related vegetables since 2016, International Year of Pulses, in order to improve health and environmental sustainability.

Moreover, pulses yield much more protein per square kilometer, which means that it is possible to halt deforestation in order to farm. They also fix nitrogen to the soil, enriching crops, reducing the use of fertilizers and improving the soil’s condition.

What about the diet of the poor? 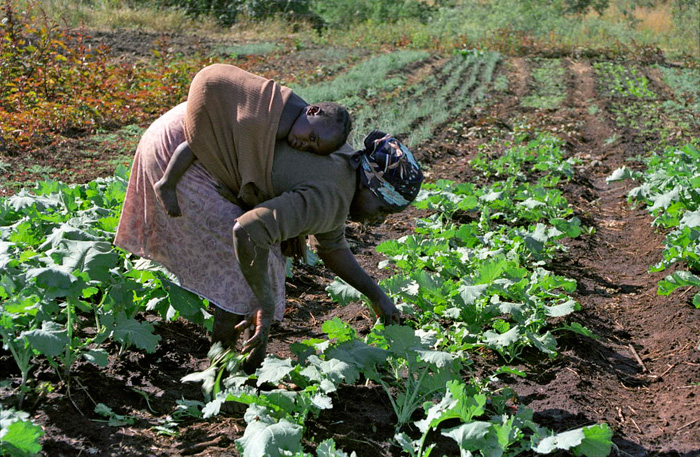 Including the carbon and water footprint is essential to calculate the sustainability of the global food system. Different factors play a role here that sometimes are not well communicated to the population of industrialized countries, such as the origin of food and its conservation needs, which implies costs and emissions from transport and refrigerators.

This is of great importance to assess the “socioeconomic reality”, which according to the IPCC needs to be taken into account when applying these diets and to avoid what many NGOs warn: the dangers the poorest farmers face if livestock is “demonized” from the environmental point of view.

The document by climate experts subscribes to many of the theses of the study by 37 scientists from 16 countries published by the prestigious The EAT-Lancet Commission on Food, Planet, Health one year ago and which is considered the world’s first scientific food plan: Healthy diets based on sustainable food systems. The study is based on the observation of the eating habits of middle- and high-income people in industrialized countries and ends up recommending a diet that is very similar to the Mediterranean diet – with more vegetables and less meat – as the most sustainable if adopted worldwide. However, the study does not tackle the enormous differences in food consumption and production systems that exist in the world, a fact that the IPCC report does warn of.

In those areas where hunger exists, many farmers need to subsist on low quality starches and have a very limited access to milk, meat, eggs and fish. In wide areas of Sahel, thousands of people survive on a handful of millet and a little goat’s milk; and in the arid zones devastated by droughts, the fruits and vegetables of the ideal Mediterranean diet are an unattainable luxury for most, although cattle can often survive there and it is possible to obtain milk or meat from it. FAO declares that livestock is economically crucial for nearly 60% of the rural households in developing countries. In these areas, it is an activity that allows the subsistence of approximately 1.7 billion people who live in poverty, 70% of which are women, a group that is greatly affected by some diseases due to malnutrition such as, for instance, iron deficiency anemia, which affects 38% of African women of reproductive age.

It is clear that human health and the health of the planet go hand in hand, but environmental dietary recommendations should not follow the division of the world between the rich, who generally overeat and eat food at a high environmental cost and the poor, who suffer famine, malnutrition and are the most affected by the climate emergency. Hopefully the resolutions of the COP 25 in Madrid will make it possible to move forward with this in mind.